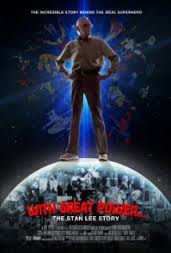 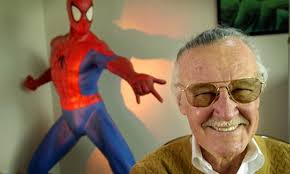 A movie that digs deep into not only the comics, but also the man who created them and what his path was really like.

With Great Power, the stan lee story is a pretty interesting movie. You have to care about superheroes and at least enjoy the superhero movies for any of this to matter to you. But if you do, than this movie tells the stories of how a lot of the characters were created. characters like spider man, the incredible hulk, and captain america. the movie also tells the stories of what was going on with the people who worked in comics, behind the scenes. and it also tells about stan lee’s personal life with his wife. that’s the least interesting part of the film, as she never even acknowledges the comics, but other than that, most things in this movie work.

Stan Lee is the face of marvel comics. and marvel comics are arguably the best comics ever created. it’s either them or d.c., and my money has always been on marvel. D.C. has superman and batman, who are both great, but marvel has pretty much all of the rest. spider man, the hulk, captain america, the x-men, iron man, thor. basically the avengers plus spider man and the x men. it comes out to a lot. and they are all fantastic heroes with great storytelling surrounding them. just think about how captain america was a hero from the time of world war II , created by stan lee during that time, and they found a way to bring him into comics and movies of today.

with great power, the stan lee story, is the story of how all of this went down. it’s the story of stan lee the writer, the guy who invented all of these heroes and how he went about inventing them. it’s interesting, and he has a lot of great stories to tell, but at the same time, he could have told a little more. the movie wants to explore stan lee’s adult life as much as it wants to explore the comics, and so we spend just as much time around him and his wife as we do around the heroes.

stan lee’s stories about how he got into the business are pretty great. when he first started, it was just him and jack kirby (the artist), and one other guy. lee supplied kirby with the ideas and kirby brought them to life. people weren’t really all that into comics, and so lee had a lot of freedom to do what he wanted, so long as he kept it cheap. nobody was really on top of him, because nobody cared.

his first real hero was captain america. this guy was a hero who took on adolf hitler and the nazis. he was relevant to the time because there really was evil out there in the world. lee ran with that, making captain america a man who not only fought the bad guys, but also represented our country.

from there he went onto make plenty of other characters, such as the x-men and the fantastic four. sometimes we get to hear the stories, sometimes we don’t. for both of those teams, lee didn’t have much to say. it’s too bad, because i’ve heard him in other places talking about the x-men and how he wanted to stop coming up with these elaborate stories about radiation and gamma rays and just say that some people are born with powers. luckily the movie is not composed only of stan lee interviews. we get snidbits of interviews with directors and cast members of the movies, and so that helps us hear a little bit about the x-men. between bryan singer (director of x-men) and james marsden (cyclops in x-men), we get the idea that the x-men series was about kids feeling different than everyone around them, and feeling wierd about it.

stan lee does tell some great stories about spider man and the hulk. with spider man, he talks about how he saw a fly on the wall one day and thought to himself how cool it would be for someone to have the power to walk on walls. then lee takes us through the different names he tried out, from fly man to insect man to spider man (ironically, there is another fairly big marvel character called ant man, who will be getting his own movie sometime in the next five years, only that never comes up here.)

aside from the stories that lee came up with for the heroes and the ones about how he came up with them, there are also lots of behind the scenes stories here about what was going on with the people who did the work. it gets really interesting when lee starts talking about his relationship with jack kirby and an interview that they did together for a newspaper. the newspaper only mentioned kirby’s name about halfway into the article, and poor kirby was really excited to read the article. when he found out, he was furious. kirby felt like lee was getting all of the credit for spider man and some of the other heroes, and he left the company.

so there’s plenty to like about this movie, with all of the great stories that stan lee has to tell. what isn’t nearly as much fun are the scenes of him and his wife. the two of them dance around the house, and talk about how they first met, and talk about how she likes expensive things, so he is always spending lots of money on her. none of this is very interesting. even when lee writes her a valentines day poem and she reads it and starts crying, it’s still nothing that we don’t get from other movies. what bugs me the most about the scenes with his wife is that she never talks about super heroes or what lee does. she doesn’t even acknowledge it. is she a fan of any of his work? I guess not. her disregard for it, and omission of even mentioning it, is almost like looking down on it. as if she’s too good for that silly nonsense.

i also thought there were many more stories about the heroes that could have been told. it would have been nice to hear about how lee came up with the idea to bring captain america into today’s time by having him get frozen in the past, and having the avengers of today find the floating ice block that he was held in. it would have been nice to hear about iron man’s alchohol abuse and what made lee decide to do that. and about thor and creating a whole other planet and world and universe. i guess, in the end, that was just too much to tell, and this movie did the best that it could. there’s certainly a lot to like about the film, and stan lee is a fascinating guy who just bubbles with personality. it’s an enjoyable movie that tells a lot of great stories.