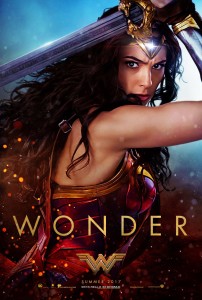 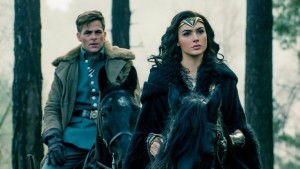 A superhero movie in the DC universe that gets it right! Finally.

A D.C. movie that actually works! This one succeeds where Batman Vs Superman, Suicide Squad, and even to some extent Man of Steel failed. It does that by taking its time to develop the characters and story. There’s no rush to merge this movie together with other films or characters in the DC universe, and you can feel the desire of the movie to focus more on development than on brining too much in. This film goes to great pains to get things right, including spending a good deal of time with Amazon women on their island at the start. There are definitely some slower parts, like some of then scenes on the streets of London, but for the most part, this movie works. And it definitely builds to a cool climax and ending.

People look at the DC Extended Universe (The DC Movie Universe,) and talk about how bad and how bleak it is. They look at the mistakes that the producers have made with these movies, and how messy and dopey those mistakes were. Most of these people forget that Man of Steel, the Superman movie which kickstarted the extended universe, was actually pretty good. But that movie was about one character alone, and didn’t seem to be one of these connecting movies the way the others do, (even Suicide Squad featured cameos from Batman and the Flash.) With that in mind, Batman Vs Superman dropped the ball big time, and then Suicide Squad only made things worse. And now comes Wonder Woman, and for the first time in what feels like ages, DC has gotten it right! They did it by finally learning from their mistakes and focussing on the big picture, which is this character and this movie alone. Everything else, (the way it connects to other films,) doesn’t amount to a hill of beans if the movie itself isn’t good. And this one actually is!

Wonder Woman is the story of Diana, a girl who grows up on the island of the Amazons, where only women live. They are warrior women who spend their time training for the day an enemy will come. These women are kind and respectful to the point where, when an enemy does come to their shores, they don’t even strike first. This causes one of the women her lives. That’s when the rest unleash hell on the soldiers who have come to their home. Long before that, however, we get the story of Diana growing up. We follow her around on this amazing island, so beautiful and delicate and pure. Considering the criticism of the DC movies with being too dark, this opening on the island puts all of that dreariness right in its place, where it belongs. Out of this film.

The only problem with the start of the movie and its initial premise is that we don’t really get a sense of who the enemies are that these Amazons are training to protect themselves against. Maybe it’s the soldiers who do come to their shores, but that seems like a surprise to them when it actually happens, and not like the enemy they were anticipating. More likely, the enemy is Ares, the god of war, who these women tell stories of. They tell of the legend of how Zeus created Diana after her mother begged Zeus for a child and sculpted her out of clay. Still to actually see the enemy, maybe as a flashback to a war the Amazons once had, would have been nice. Think of the first Thor movie, with the opening battle against the Frost Giants. We hear the legend of Ares, and how he killed the other gods, but considering these women spend their whole lives training in the art of battle, you would think the threat would be more than just a legend. Other than that, however, the entire beginning of the film is great. This includes the idea thatt Diana’s mother is keeping some sort of secret from her, about who Diana really is. What we do know, and what her mother tells her, is that she is the only child on the island.

The enemy that comes to their shores is a group of German World War I soldiers. They are chasing down a pilot named Steve Trevor (Chris Pine,) who is an American spy. Trevor infiltrated their camp, stole some information, and has now escaped. His plane crashes in the water and Diana sees it from far off and swims to rescue him. Then the Germans come to their shores looking for him, and we get our first battle of the movie. It’s pretty fantastic. These Amazon women can fight, and they only get this one scene to do it, so you better believe it’s a great scene. After taking out the Germans, (and the coolest moment is when one of the warriors fires off three arrows at once, all while falling through the air,) the women try to turn on Trevor too, only Diana stops them. She knows there’s something different and special about him. Trevor now spends a few days recovering on the island, during which time he and Diana have some conversations about what this place is and who the Amazon women are.

The agreement is that she will help him leave the island and he will take her to the front lines of the battle, where she hopes to confront Ares. Diana’s belief is that it doesn’t make any sense for men to be fighting each other in this great war, unless Ares has put some kind of a curse on them. She plans to kill Ares, break the curse, and end the war. In order to get her to those front lines, however, Trevor has to first take Diana into London and introduce her to a whole bunch of people. He has to get her cleaned up and changed into an outfit that looks semi-normal, (compared to the Amazonian armor that she wears.)

The London scenes aren’t great. They mostly go for comedy here, and only some of it works. There’s Diana trying on different outfits, all while never losing her hold of her sword. There’s Diana meeting Trevor’s secretary and hitting it off with her. There’s even Diana storming into a meeting of military leaders and demanding that they take action instead of just standing around deliberating. Trevor gave Diana a little speech at the beginning of the film about how when something is going horribly wrong in the world, you can’t just stand by and watch. This is what motivated Diana to come to Europe and to the war, and it’s what motivates her to go on a mission, even without the permission of the authorities, now.

Diana on the battlefield is the first real action scene of the movie. Sure there was the Amazonian fight against the soldiers, but this is the first time we really get to see Wonder Woman in action, walking through the battlefield, deflecting bullets with her wrist guards, and taking on loads of gunfire. From there, we get a bunch of other action scenes, including Diana fighting the enemies in hand to hand combat, jumping through walls and windows, and doing whatever it takes to rescue some prisoner.

Despite all this, the London scenes are the movie’s slow parts. Sure, there’s some action, but it all looks a little too dark and dreary, (the criticism of most DC movies.) Most of the comedy in this movie works, (certainly a lot more than it did in Batman Vs Superman or Suicide Squad,) but the jokes that take place during the London scenes are some of the weakest in the film. Maybe that’s because this is where they feel forced, whereas during other parts of the movie, the jokes just seem to come out naturally. Still, this movie definitely has some laughs, and that’s a nice attribute.

One of the main reasons why the movie works so well is because of the way it handles its villains. Two superhero movies over the last several years, really screwed up by revealing the villains and action scenes too much in the trailers. The first was The Amazing Spider Man 2, (Rhino and the final shots of the film were shown in the trailer,) and the other was Batman Vs Superman, (seeing Doomsday in the trailer was a big mistake.) Wonder Woman makes sure to avoid all of that. There are two villains front and center for most of the film. One is the German leader, (played by Danny Huston (returning to the comic book movie world after he played William Striker in Wolverine.) The other is a weapons scientist who has a deformed face and has clearly done one too many experiments. But there’s more. I won’t spoil any surprises, but to say that this movie gets it right in terms of how to surprise us when it comes to villains.  I really  like that the two villains we do see for most of the film are working together, and that it doesn’t seem like a superficial partnership, (the way it always does in the Batman movies,) but more of a real working relationship. Let me put it this way… when we meet these characters. they are already working together. We don’t have to watch any phony introductions where they meet each other.

As good as most of this movie is, the ending is by far the best thing about it. A movie is supposed to get better as it goes on, leading up to the biggest and most exciting moments for the climax. Most films don’t achieve that goal. They end up wearing thin the longer they go on. Not Wonder Woman. This film is a prime example of saving surprises and cool moments for the ending. And this is definitely the smartest and most well-made of all the DC movies yet. This is the one where the humor doesn’t just bounce off and make you roll your eyes, but instead where you actually laugh at some of the jokes. This is the film that really impresses you with the action. And the actors and characters here are also pretty great. The villains themselves may be kind of ordinary (cool looking, but not much else,) but the leads have some real chemistry. Both Gal Gaddot and Chris Pine are terrific. This film is a real crowd pleaser and a wonderful success.