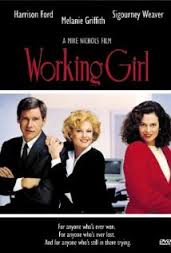 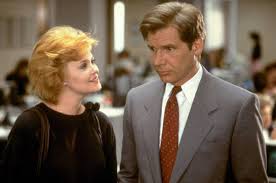 A pretty good eighties romantic comedy set in the world of business and finance.

Working Girl is a good, entertaining film, but it’s also very much an eighties movie. That means it’s about mistaken identity and impersonation and all the kinds of things that went out the window with movies about ten years ago. Back in the eighties, this kind of thing worked and was even kind of funny. It helps that Working Girl only uses that for a small portion of the film, and actually has a lot going on. The central storyline is between Tess, her boss, and the guy who comes between them. Only the movie takes its time to really introduce Tess to either one of those characters. Instead, it really does a nice job of firmly establishing her character in an unhappy life situation. On top of that, Sigourney Weaver, as the villain is pretty good. She’s not a cliche of any kind, and instead is more of a two-face, preaching one thing while really doing another. The movie does start to feel pretty routine by its end, but at that point, we have firmly bought in and are there for the rest of the ride.

REVIEW:
Working Girl is a fun, light-hearted eighties movie. They don’t really make movies like this today, and if they ever tried, it certainly would not go over very well. That’s because the eighties were a very different time. You could get away with much more simplistic plot lines back then. Stories like this about mistaken identity (Desperately Seeking Susan, Big Business,) were still fresh and even considered original. That carried all the way into the mid-nineties with movies like While You Were Sleeping, until finally the general public caught on.

But for Working Girl, this kind of story was just what the romantic genre needed. It was a movie about female empowerment. The male lead, Jack Trainer, (Harrison Ford,) is a bit player here, good for romance and support, but not a whole lot more. At the center of the film are two strong women. Tess, (Melanie Griffith,) as the young, inspired, go-getter, and Katharine, (Sigourney Weaver,) as her hard-edged, entitled, conniving boss.

One thing great about this movie is that Katharine doesn’t start out this way. The movies where the villain’s persona is telegraphed from the very start of the film always turn out to be a mess. The villain ends up coming across as cartoonish, campy, and cliched (all of those horrible c words.) In Working Girl, we don’t even meet Tess’ boss, Katharine, in the first act, and when we finally do meet her, she actually seems pretty cool.

The movie starts with Tess working at a deadbeat job. She lives on Staten Island and has to take the ferry into the city for work every day. Tess works as a secretary for stock traders. She has an unsatisfying life, including a boyfriend (Alec Baldwin,) who buys her presents that are more for himself than for her (like lingerie he wants to see her in.)

Tess is pretty miserable at work. She is surrounded by a bunch of jackass men who don’t work half as hard as her, but reap all of the rewards. These men are her bosses. They see that Tess is unhappy and looking for something better, and so they try to set her up. Only the man they connect her to (played by Kevin Spacey,) ends up being a cocaine addict pig who only wants Tess for a one-night stand. Tess quits her job (angry with her bosses who set her up with this guy,) and goes home early to catch her boyfriend in bed with another woman.

At this point Tess starts looking for another job. She meets with an agent who places her in an accounting office and that’s where she starts working for Katharine. Her new boss tells Tess that she believes in both of them succeeding together and doesn’t believe in the kind of relationship where the boss gets ahead while the employees do not. It all seems great until Tess learns the truth.

This starts when Tess goes to Katharine with an idea for how to bring a company with TV air time into the radio medium. Katharine rejects the idea flat out. But then things get worse. Katharine becomes injured and confined to a hospital bed while on vacation skiing. Tess needs to help Katharine out by going over to her boss’ apartment. And once there, Tess finds all kinds of messages that show Katharine was trying to sabotage Tess’ idea by telling the other company not to meet with Tess.

This inspires Tess to take advantage of Katharine not being around (now knowing that her mentor and boss really was trying to keep her down.) Tess sets up a meeting with this guy, Jack Trainer. The night before the meeting, she goes to a company party and meets Trainer. Only he doesn’t tell her who he really is.

This leads to the mistaken identity. He and Tess have a one night stand (kind of. She gets drunk and passes her out and he puts her into bed.) The next morning she wakes up early, and gets to the meeting. Trainer is already there.

He and Tess start working closely together on a deal. They also start up a relationship. When Katharine gets back to town, she can’t believe what her secretary has been up to. It doesn’t help that Katharine was seeing Trainer, herself, and that he was about to break up with her when she got injured on the ski mountain. This all leads to an exciting board room climax about who deserves credit for the ideas and how you prove it. The movie, as a whole, is a lot of fun. The basic components might seem pretty routine and even cliched today, but for a movie of that time, it definitely worked. And it still holds up pretty nicely.