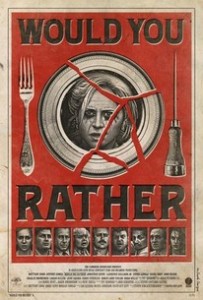 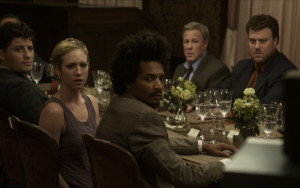 There’s a cool idea on the table here, about a contest that takes place at a dinner party in a mansion and is sponsored by a billionaire. None of the strangers who arrive at the home have any idea what they will be asked to do. That’s usually the case in a movie like this. And the film does take its time building up with the challenges. What it doesn’t do is give us any real character development. We spend most of the movie sitting around the table with a handful of characters that we know next to nothing about. When these people have the opportunity to meet each other, as they are first brought into a room, most of them stay silent and lurk in the corners. And then the game begins and it is pretty torturous. The first two rounds are interesting in a horrific way, but by the third round the movie goes off the reservation. I understand getting crazier and more extreme as a film goes on, but when characters start making decisions that are out of the blue and ridiculous, and when the challenges cross a certain line of grotesque-quality, it’s time to check out. Unfortunately the movie does reach this point.

At the start of the movie we meet Iris (Brittany Snow of the Pitch Perfect movies,) a woman who has moved back home to take care of her handicapped brother after an accident has left him in really bad shape. All of this comes out in the opening scene which reeks of exposition as Iris is at a job interview for a waitress position and the hiring manager asks why she moved back home, and if she dropped out of school. Then we see Iris at home with her brother having forced conversations like, “do you ever feel bad that you gave it all up for me,” kind of stuff. This movie definitely doesn’t excel with dialogue.

From here we move to a scene with Iris in a doctor’s office talking about her brother’s situation. This is the man who is treating her brother, (played by Larry Gillard Jr, better known as D from The Wire.) There’s a mysterious gentleman sitting on the couch in the office eating peanuts and leaving the shells on the couch. This is Shepard Lambrick (Jeffry Combs, from the Re-Animator movies.) He runs a foundation and is a billionaire and offers to help Iris out with her medical bills. He also says that he has access to donors and the ability to get her brother bumped up on any list so that he can get immediate treatment. The only catch is that for him to help her with all this, she needs to come to his mansion for a dinner party and to win at a game.

Iris is uncertain when she takes Lambrick’s card and considers calling him. She needs to call before a certain time to RSVP. When she gets a call from the restaurant that she interviewed at, saying she is not only being rejected from the waitress job, but also the hosting job, she decides she needs to take a change on the Lambrick foundation dinner party game situation. So she makes up an excuse for where she’s going to tell her brother and then she heads out. The Lambrick foundation sends a car to pick her up and just like that, Iris is on her way to the mansion.

When she arrives, she is brought into a room with a bunch of strangers standing around and not really talking to each other. Two guys approach her and bring her into a corner, rattling off what they’ve noticed about all of the others in the room, but this scene is really rushed over fast without giving us the chance to actually get to know anyone. That’s a shame. We are told, for example, that Conway, the character played by John Heard, is a conspiracy nut, but it would have been nice for us to see that ourselves in a scene where he rattled off some crazy theories or something. This movie is in a hurry to get to the dinner party, and that’s a bad move. Character is important and in this film, it’s a rush to get to the horror without any attention to who the characters are and what they all think of each other.

The group goes straight to the dinner table where different exquisite dishes are served. First is a steak dish. Iris won’t eat it because she is a vegetarian. Lambrick offers her ten thousand dollars to eat it and she does. Then he makes fun of the way she compromised all of her values and something she’s worked hard to uphold for years, just for a little money. Then comes the alcohol. Conway isn’t drinking. Lambrick determines that Conway must be a recovering alcoholic and now it’s his turn to be given an offer. If he drinks the glass of wine he gets ten thousand dollars. If he drinks an entire decanter of wine, it’s fifty thousand. He opts for the decanter.

At this point the movie is pretty cool. These bets aren’t a big deal and they are pretty interesting. They help us understand who the characters are a little bit, and what they value. But then things quickly change. There is a final offer for anyone who wants to leave to walk out (although if you just saw someone win ten grand for eating a delicious steak and someone else win fifty grand for drinking some wine, would you be going anywhere?) When nobody gets up, the real game begins. An electrocution torturing machine is brought into the room and when one player tries to walk out, he is shot and killed by the wait staff.

The game is a would you rather situation where each player is given a choice during every turn. The first round is the electrocuting. The option seems to always be, electrocute yourself or electrocute someone else in the room. It’s pretty interesting  what each of them chooses. The only thing that would have made it more interesting is if each of them got to choose any person at the table to electrocute. Even still, this is pretty entertaining stuff. It reminds me of that famous psychology experiment where people were brought into a room and told to press a button to electrocute someone. The man telling them what to do kept insisting that they had to do it, but the person would hear the screams coming from the other room. The truth was, there never was someone being electrocuted in the next room, and this was simply an experiment to see how far people would go when being told they had to do something. In the case of Would You Rather, the characters all saw what happened to Conway, so they know that if they don’t push the button, the same fate will fall upon them.

The next round is about beating someone with a stick or stabbing them in the leg. This is where the movie starts to get a little gross. Especially when one character, who was formerly in the armed services, continues to take all the beatings. Seeing the characters reason with each other at the table and try to make the best decisions for the group is interesting. For example, one person at the table is paralyzed from the waist down so the idea is that stabbing her in the leg won’t really do anything. Boy do these characters have a surprise coming their way, with what ends up happening to the woman. Like the first round, this one is pretty terrifying, but also somewhat entertaining. Characters make choices that you wouldn’t expect, and some of them think they are starting to figure out what this game is really all about.

The last round is where the movie goes off the rails. Understandably, this should be the most brutal round, and it is, but some of the things that happen here are just ridiculously awful. Specifically something involving an eye. If the movie held itself together pretty well up until this point, (although an escape attempt diversion is kind of a waste and seems to be thrown in there just to kill a little time,) then this is the round where the movie falls apart. First, there’s a ridiculous decision that a character makes to take one challenge instead of another after having just watched a man blow his hand off and then die instantly. And then there’s the final decision of the movie, which seems very out of place. There’s an end twist too, but at this point the movie has become so dark and disturbing that we don’t even really care. There are definitely some cool ideas to this movie, but it is so focussed on the torture scenes that it forgets about the importance of build up. We should have been given the opportunity to meet the characters and learn about them and even care about them a little. This movie has a one track mind and that can only last so long. It’s impressive that the movie got to the third and final round before really falling apart.