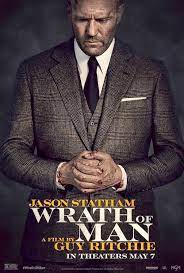 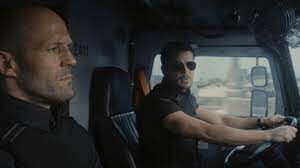 Heat meets Tarantino, this one is the most serious and gritty of Guy Ritchie’s films, and really shows his mastery as a director.

Now this is a cool movie. Back in the mid-nineties, every movie wanted to be Pulp Fiction, and all that really meant is they all tried to mix crime with casual conversation about pop culture. This movie, Wrath of Man, is the first one to actually figure out what worked about Pulp Fiction… the clever fracturing of the narrative. The movie tells a story of a man seeking vengeance for his sons killer, but it does this by showing us three different situations of three different gangs in three different times. And they all cross over around one single event. It works even better than one might expect, and ends up giving us a smart and thrilling action movie.

Guy Ritchie back in top form. That’s what it seems like here. This movie certainly deserves a place on the short list of his better films. Only the truth is, when you really think about it, this isn’t so much “back,” as it is Ritchie trying something new and proving himself in a different area. Wrath of Man is a gangster action movie, to be certain, but it’s one that is pretty much devoid of humor. Now, humor is Ritchie’s trademark. The comedic gangster movie. So to see a movie as dark and gritty as this coming from his hands means he’s really going for it. He’s out to prove himself. Let’s put it this way… the difference between Ritchie and Matthew Vaughn (the man who produced Ritchie’s first films before going on to become a director himself,) was always that Ritchie made funny gangster movies and Vaughn made more serious ones (well, one… Layer Cake.) But here, with Wrath of Man, Ritchie is pushing himself and showing what he can do.

This is Ritchie’s fourth time working with Jason Statham, and that’s notable mainly because the two of them broke out together. Statham was the star of Lock, Stock, and Two Smoking Barrels and Snatch. And those, of course, were Ritchie’s best two films. Well, Wrath of Man is probably his third best (with Rock N Rolla being the fourth.) That means three for three, Statham is the star of all three of Ritchie’s best movies. And it’s funny, because Statham isn’t an especially great actor in anything else (sorry Fast and the Furious movies, but those are B movies every step of the way.) So these two working together is pretty much gold (except for the Ritchie-Statham movie Revolver, which was a dud. But everybody is allowed one screw-up.)

With Wrath of Man, Ritchie is taking on armored trucks and armored truck robberies. That’s right out of Heat, with the opening robbery sequence, and Ritchie has found a way to turn that sequence into an entire movie. He does that by using the stylings and methods of Quentin Tarantino. Tarantino uses chapter titles. So does this movie. Tarantino tells his movies out of order, fracturing the narrative. So does this movie. Tarantino likes to show the same scene from all different points of view and angles (see the mall food court and clothing store dressing room scenes from Jackie Brown.) So does this movie. Wrath of Man takes those elements and still manages to feel like its own thing, because it doesn’t also wrip off the dialogue of Tarantino, which is his trademark element. Instead, Wrath of Man finds a way to use the fractured narrative technique and really make it work, adding in mystery, confusion, and some pretty solid revelations.

The movie opens with a robbery scene filmed from inside the armored truck. The camera is positioned in once location, in the truck, and while it does pan back and forth, up and down, it never moves out of that location or cuts to anything else. What that means is that we only see what is happening inside of the truck, even while the action is taking place outside of it. That turns out to be a pretty cool technique because it makes us curious about what else is happening, it makes the truck like a character in the movie, and best of all, because we get to see that same robbery scene multiple times later on, from all different points of view. So making us curious now actually has some major payoff down the line.

From there, we are with H (Jason Statham,) as he gets interviewed by an armored truck company called Portico, and hired to be one of their drivers. H passes the interview, is trained by another driver named Bullet, and just barely passes all of the tests, including the shooting one. He gets the exact right percentage where he passes, without going over it. And then he starts driving. H’s first day on the job goes off without a hitch, although he. does run into some conflict afterwards. At the local bar where all these drivers go after work, H is confronted by the guy whose job he replaced. That guy still works for the company, only he was demoted to desk duty and in house security. This first segment is mainly about meeting the different characters at the company. It becomes about something more, however, after a few months have passed and H walks into his first robbery.

The chapter is called A Dark Spirit, and we soon learn why. H, Bullet, and Boy Sweat (Josh Hartnett,) are driving a truck for a routine pickup one day, when the truck gets robbed. H is instructed to throw the bags of money from the back of his truck into the back of a pickup truck. Only he misses one on purpose, and then when he throws the next bag, he fires his gun at the robbers, while doing so. This leads to a gun fight, and to H being a hero for the company and the other two guys. Some time after that, there is another robbery of a truck H is in. With this one, the robbers spray paint the windows of the armored truck black. H gets out of the back of the truck. The robbers take one look at him, and they get in their cars and drive away. Later on, at the bar, Bullet and Boy Sweat talk about what happened, and how it was as if the robbers recognized H. That’a where the Dark Spirit line comes in. They don’t know what H is, but they can tell he’s not a cop or a former cop. Whatever he is, he’s a dark spirit.

The movie is shrouded in mystery. Not knowing who the main character is, for at least one third of the movie, or really anything about him, is a smart move for creating that kind of atmosphere. The music is also pretty perfect with its dark and ominous tone. And then there’s the Andy Garcia character, an FBI director who sends his men in to question H after he saves the money from that first robbery. The two agents return to their car after the interview, and call boss Garcia. The phone call that ensues doesn’t tell us a whole lot, but certainly adds to the mystery, as we learn that the director and his men clearly know who H is, and are wondering what he’s doing there.

Part one ends with that conversation about how the robbers walked away once they saw H. That leads to our first time jump, and it begins with H and his son getting in their car. This is a flashback, and during this chapter, called Scorched Earth, we see the armored truck robbery that opened the movie, from the point of view of H and his son. Now we know why being an armored truck driver  is so important to H. He’s after the men who killed his son. But what we don’t know is that H is a criminal kingpin and armored truck robber as well. In fact, the reason he’s there at the scene of the truck robbery is because he’s scouting out the truck and its route, himself. After we see the robbery, and the murder of H’s son, Danny, the story takes an interesting turn. It now becomes about H and his crew turning over every table and doing whatever they can to find answers about who did this. This includes torturing criminals, killing pornographers, and “scorching the earth.” In this act, we really get to know H’s crew. In fact, each of the first three acts is about getting to know a different crew. The first one was about the Portico companies crew. The second is about H’s crew. And the third act, called “Bad Animals, Bad,” is about the crew that actually did the robbery.

In that third act, we again take a time jump and go back to a much earlier time, when this crew was first back from the war overseas and just starting out doing jobs. Like the other two acts, we get to know each member and some more than others, (like the wild card, Jan, who is the man that actually pulled the trigger on H’s son.) We follow this crew through conversations about how they are not making what they should or getting the opportunities they expected, and then we watch them pull of multiple jobs. When none of them work out smoothly or result in the kind of payout they were expecting, they turn to armored trucks. And now we get to see that opening armored truck robbery for a third time, from a third point of view. This time we see the full execution of the plan, including these robbers dressing as construction workers and even operating the construction equipment to help them.

This all leads to the final act or chapter… “liver, spleen, lungs, heart.” It leads to the biggest robbery of them all. The depot. The place where the armored trucks are stored. The home base of the truck drivers. And it leads to one hell of a climax, including the robbers coming in wearing full bullet-proof armor and helmets. This is a fantastic climax to a pretty solid movie. The action and mystery here are great. The way the story unfolds is terrific. The characters might not be one of the better features here (there’s only one woman on the team, and many of the character seem one-dimensional,) but as far as story and action go, this one definitely delivers. It is smart and gripping the whole way through, and is absolutely one hell of a movie.