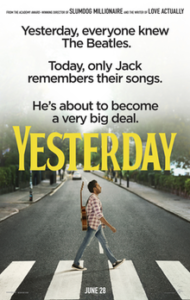 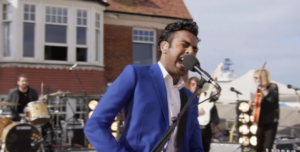 a pretty terrific premise ends up taking some strange yet satisfying turns as this movie goes on and encounters all sorts of unexpected situations.

A truly creative and original movie, this one tells the story about a musician named Jack, who wakes up in an alternate reality where The Beatles never existed. That means all of their songs are up for grabs, and he’s the only one who knows about them. The movie follows Jack on a path to success, and is loaded up with comedy. But it also tells the story of a romance between Jack and his long time manager / best friend, who just hasn’t found the right moment to get together with Jack. For some reason the two of them are always in the friend zone with each other, and even when they realize that they do both like each other, more complications fall in their way. This movie tries very hard to keep us on our toes and give us things we haven’t seen before. Most of the time it works, although the final act does have a few hiccups here and there.

Yesterday is a very entertaining movie. It’s a romantic comedy of sorts, crafter with a truly unique and creative premise at its forefront. The movie also has an amazing team behind the scenes, pulling all of the strings. There’s Richard Curtis as the writer, (the writer behind Four Weddings and Funeral, Notting Hill, and Love Actually.) Then there’s the uber talented Danny Boyle, (Trainspotting, 28 Days Later, Slumdog Millionaire, 127 Hours,) as the director. Having the two of these guys together is like the dream team of English movie makers. And with this movie, they do not disappoint. This is the kind of thing that is so smart and unique that it’s a wonder nobody has ever thought to do it before. Everybody is so busy making movies about the talented musicians who crafted amazing songs, (Bohemian Rhapsody, Rocketman,) or the young versions of these musicians lives, before they really got famous, (Nowhere Man, Jimi: All is By My Side, and Get On Up,) that no one ever considered making a movie about the music and not the musicians.

And what Yesterday does is it finds a way to set the movie in an alternate universe where the musicians themselves, never existed. At least not according to everybody besides our hero, Jack (Himesh Patel,) who remembers all the songs pretty clearly and can’t believe that he’s the only one. Jack is a struggling musician. He’s got an amazingly supportive and attractive manager as his number one fan, (Ellie, played by Lily James from Baby Driver and Cinderella.) Only his career is going nowhere. When we meet him, Jack is playing at bars where the only ones interested in his music are his friends. He’s getting frustrated with the lack of support, and then Ellie scores something pretty big for him. A chance to play under his own tent at Lattitude, a massive music festival. Both Jack and Ellie are super excited. Cut to Jack playing under the tent and pretty much no one there. Just a few kids, sitting on the ground, and of course, his friends.

Now Jack is truly down on his luck. He’s hit rock bottom. If he couldn’t make Latitude work, a festival that most musicians only dream about playing at, then what chance does he have of making it out in the world? He considers giving up music all together. His relationship with Ellie is a strange one, where when we first meet her, we assume she is Jack’s girlfriend, based on how much she loves and supports his music. And it takes a friend coming by and asking Jack if he and Ellie ever got together to clue us into the fact that they are just friends. Well, now with Jack deciding that it just might be time to give up the dream, we see for the first time that Ellie is really into him. Her reaction, when he leaves her car that night, shows us she pines for him and can’t believe he doesn’t notice her.

And then Jack gets hit by a bus. It all happens during a freak blackout that knocks out all the lights around the entire world. When he wakes up, Jack is in a hospital bed and his two front teeth are missing. Some visitors come to see him, including Ellie, and pretty soon Jack is on his way out of the hospital and off to see some friends. During this time there are a couple references or clues to the idea that people don’t really know The Beatles. Jack drops a couple of lines every once in a while, like “I get by with a little help from my friends,” and nobody seems to get the reference. And then he plays the song “Yesterday,” for his friends, after being given a new guitar. Everyone is blown away. They are moved. How has Jack never played anything like this for them before? Where did he come up with this? Jack, of course, thinks they are all just messing with him, and quickly leaves.

Back home, he does a google search of the Beetles and comes up with nothing but insect pictures. He tries googling John, Paul, and George and ends up with stories and pictures of the different Popes. At this point Jack does not know what is going on. He goes to his record collection to pull out his Beetles albums, and none of them are there. When he tries googling other groups, like the Rolling Stones, they appear in his search as if everything is normal, but with The Beatles, he gets nothing. At that point, Jack drives to Ellie’s house in the middle of the night, rings her doorbell in the pouring rain, and asks her if she genuinely does not know who The Beatles are. When she answers that she doesn’t, he explains that he’s in a really complicated situation.

Jack plays “Let It Be” for his parents and their friend, and only gets past the first introductory bit before getting stopped about a thousand times by his audience, (phone and doorbell ringing to name just a few of the reasons for stopping.) The scene is comedic, but it also lets Jack know he needs to bring the music to an audience and let them decide for themselves. And at first he does that, playing at bars, and still has no success. Jack starts to feel like it’s not the music, but it’s him. People just don’t like him, no matter what songs he’s got. And then a man who has his own little recording studio gets Ellie a card to give to Jack, and this leads to Jack recording some of his songs. The scenes of he, the producer, and Ellie dancing around to Jack singing Beatles songs makes for a pretty great montage.

All of this leads to Jack getting a call from Ed Sheeran, who wants to meet him. Sheeran has heard some of the music and thinks its fantastic. He wants Jack to open for him on tour. But first, Sheeran shows up at Jack’s house to actually meet him in person. And there’s a pretty funny scene between he and Jack’s father in the kitchen, where Jack’s father has no idea who he’s talking to, and treats Sheeran like just some guy who is in his way around the kitchen when his father is trying to get things out of cupboards. The comedy of it all works, but so does the story, and this movie does a great job of tracing the small steps that lead to success, from nobody hearing Jack’s music all the way through going on tour with Sheeran.

And Sheernan sets Jack up with all the right people, including producer and agent Deborath Hammer, (Kate McKinnon, who is hilarious here.)  Pretty soon Jack has launched to superstardom. Before leaving England to go to America with Sheeran and Deborah, Ellie tells Jack how she has always felt about him. She talks about always finding herself in the wrong column. The friend or manager column. And Jack feels like an idiot for never taking notice. He likes her too, but he can’t stay in England when his dreams are calling, and she can’t go with him since she is a school teacher and her school is still in session.

Their romance is an unusual one. So is this movie. Not content to let anything fall into the usual cliches or paths, this movie carves out its own way, including having Ellie start to date someone else. Now, normally in that situation, where the audience really wants the two leads to get together, and the girl is dating another guy, that other guy turns out to be a real jerk. That way, we don’t feel bad when the girl leaves him for our hero. Not so here. And the romance story is only part of what’s going on. Another major part is that there are two mysterious figures who seem to be onto Jack. They follow him around to certain locations in England, like the cemetery where Eleanor Rigby is buried, and Abby Road. Jack goes to Liverpool to visit all of these real locations, because he wants to be inspired, (another nice touch of the movie.) And these two figures keep showing up, making us wonder what they’re all about and what they know.

The reveal of who they are turns out to be great. So is a scene that takes place later on, including a strange cameo of sorts, that really goes a long way. All of this is fantastic. It could have used a little more clarity, as to where the songs came from (did The Beatles exist and write the songs, and just never become famous in this alternate timeline?) but for then most part, we get the gist. The only thing that doesn’t quite work is the resolution to the romance story. Something about how it all gets resolved just feels a little too neat and simple, when what they were dealing with was actually pretty complicated. But the overall story here is wonderful, and the writing is superb. In another of many great scenes, Jack meets with a boardroom full of producers who strike down his ideas for albums. Abby Road is just a boring street, they say. Sergeant Pepper seems ridiculous. And the White Album just has racism written all over it. This kind of funny outlook on The Beatles, is one more notch under the movies belt. This is a film that really goes for it. No wonder it got Danny Boyle on board. An opportunity to make such a unique and creative film doesn’t exactly come around that often.