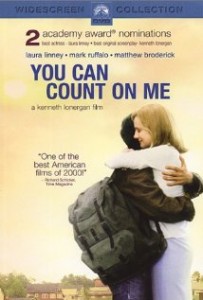 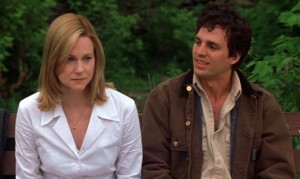 An Interesting character based story about a brother and sister who reunite and confront their problems after not having seen each other for years.

You Can Count On Me is the movie that introduced Mark Ruffalo to the world, or at least to the people who were paying attention. It’s also probably the last time that mathew broderick was relevant. And for Laura Linney, it was her first real starring role, after playing the love interest to jim carrey in the truman show.

But none of that would matter at all if the movie wasn’t good and memorable. It was a drama about a brother and sister living in a small town. The brother was a bit of a degenerate, coming to stay for a few days with his sister and her kid. That was the main focus of the story, but there was also another subplot of nearly equal importance, which was that the sister, Sammy, (Laura Linney) just got a new boss (Broderick) at the bank where she worked. And the new boss was a bit of a jerk.

Right off the bat Broderick did what no new boss who wants his employees to like him should ever do. He started making changes. And they were changes that were guaranteed to piss people off. For Sammy, she could no longer leave work for fifteen minutes, in the middle of the day, to pick her son up from the bus and bring him to the babysitters. For some of her coworkers, broderick wanted to alter the colors on their computer screens and dim them down to look more professional.

And then her brother terry (Mark Ruffalo) comes into town. He stays at the house with sammy and her son, and he’s not really such a great influence. he spends a lot of time around the son, who is only eight, cursing and smoking and drinking. Terry treats the boy like an adult, teaching him life lessons without sugar coating them at all. One night after the boy has been tucked into bed, terry sits with him and talks about the boy’s father. He tells him his father is lousy, but his mom, sammy, is great. So he’s had some good luck and he’s had some bad luck. Not really the kind of thing you tell an eight year old about their life. Most adults would be reading him a bedtime story, but not terry.

Ruffalo’s character is the highlight of the film. He’s a guy who tells it like it is, and has his own thoughts about what’s right and wrong that aren’t necessarily correct. He gets into fights and into trouble and early on, he tells his sister that he just spent three months in prison.

Sammy starts up a fling with her boss, brian (Broderick) and that’s used mostly for comedy. In fact the whole brian character is used for comedy with his rigidness and uncompromising attitude. He reminded me a little bit of the bosses in office space, although not quite as silly. In the first half of the film, brian and sammy continuously butt heads. One particularly funny moment has him tell her the things he doesn’t like about how she works and include things that she doesn’t even do, like lateness, but that other people who work there do. He knows she doesn’t do it and says so, but includes it on the list anyway. It’s pretty funny, right along the same lines as him calling her in to talk about the colors on her computer screen when she’s not the one who has that problem.

While Sammy is dealing with her issues with Brian, her brother terry and her son are bonding at home. The son, rudy, as played by Rory culkin, likes terry a whole lot, probably because he has never had an adult male in his life before. Terry and him play pool at a bar, go out fishing, and in one terrible decision of terry’s, go to meet rory’s father, unannounced. they just show up at the door. It’s a recipe for disaster.

The movie is filled with clever ideas like that which come from the characters and the way they see the world. Sammy wants terry to figure out his life and she ends up pushing a priest on him. Sammy doesn’t know what he wants, but is okay with that. What he’s not okay with is having other people look down on him and say condescending things like, “do you think your life is important?”

These two main characters of sammy and terry are extremely strong and they drive the entire story just by living their lives, trying to figure things out. The funny thing is that while Sammy thinks terry needs to come up with a plan and get things together, she isn’t really doing all that much better herself. She has a place to live, yES, but is in between two men and can’t decide what she wants from them.

The movie is filled with realistic conflict like this. I love that it doesn’t overload anything to the point of ever becoming unrealistic. At the most, Sammy deals with two situations at one time, the new boss and the brother coming to town. And that’s about it. The movie tries to ground itself in characters that could really exist and that aren’t necessarily good guys. Sammy does cheat with a married man while his wife is pregnant. It’s not pretty, but it dam sure is interesting and makes for an entertaining and powerful film.