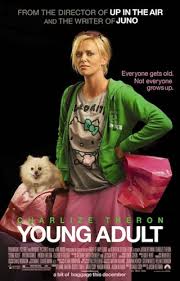 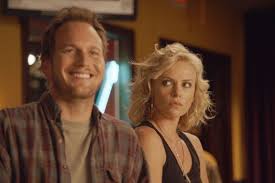 A pretty entertaining black comedy about an unhappy person who thinks she can do whatever she wants and usually gets away with it.

Young Adult is one of those rare movies where the main character is a bad person, and yet at the same time, she is still kind of the hero. there aren’t many movies like this, simply because it’s hard to relate to. audiences want to cheer a character on, and not to cringe at the actions of the person we are hoping to like. the few examples that come to mind are movies like in the company of men, American psycho, and shattered glass. in each of those movies, the leads were absolute villains. they set out to hurt people either just to do it, or for money and fame. young adults is a little different. that’s because it’s protagonist does have a moral center, hard as it may be to find.

this movie is about a woman named Mavis, who thinks she is on top of the world. Mavis has more in common with Jules from the French new wave film ‘Jules and Jim’, then she does with any character from modern cinema. she wants what she can’t have. when she sees a challenge, she goes after it, not because it’s so great, but because she needs to prove to herself just how amazing she is. the funny thing is that she is not all that amazing.

Mavis is played by Charlize Theron, a very talented actress who has gotten better and better at her craft over the years. when she started out with two days in the valley, Theron was little more than a pretty face. she has certainly come a long way since then. she plays Mavis as a woman so blinded by her own former success, that she can’t see clearly through a moral lens. I love the way her character is carefree about telling people what she plans to do, as if there’s no reason not to be honest about it. she just doesn’t see why it’s wrong.

Mavis is an author of a young adult series. the series used to be very Popular. that’s when Mavis achieved success, left her hometown, and moved out to the big city, Minneapolis. now she gets a Post card from a former boyfriend announcing that he has just become a father, and she decides to go and see if she can get the guy to leave his family. she wants him back. it definitely feels like a Neil Labute kind of premise, although not quite as horrid. Labute’s movies (in the company of men, the shape of things), tend to have characters do things for the purposes of pure evil. Mavis is doing things because she wants to prove how great she is to herself.

early on in the film, Mavis leaves her comfortable apartment and heads back to her hometown. when she gets there, she calls up the old boyfriend, buddy Slade (played by Patrick Wilson), right away. she asks to get a drink with him and he tells her that tomorrow afternoon would be the best time for him. then she heads out to a local bar near her hotel to get a drink by herself.

At that local bar she meets the character who will really be the life of the film. that character is Matt, played by Patton Oswald. whereas buddy Slade is kind of boring, and Mavis is pretty one noted, and mean selfish for most of the film, matt is the guy who sees what’s happening and is able to analyze it. Matt is a character with history. he actually has more of a back story than any other character in this film, which is a big part of the reason why his character is so lively.

Matt was taken out into the woods back in high school and completely beaten by a bunch of older jocks. they thought he was gay, and they beat him in ways that he was never able to recover from. Back then it was considered a hate crime. when it came out that Matt wasn’t actually gay, it just became a beating up the fat kid story, and matt lost whatever support he was getting from people. he’s a broken down guy who can’t walk without a cane and when he learn of how he has to do things below the belt, we get a hell of a mental picture.

matt becomes the best friend Mavis. they might barely know each other, but he’s the guy who she talks to about what’s going on in her life. that’s an interesting choice. he’s an unusual person for her to be confiding in. she talks to him that first night at the bar, but then runs into a number of times again after that. at first they are coincidences, but after a while, she decides that talking to him is actually a help, and she seeks him out.

the movie is all about Mavis trying to get with buddy, and I like how it basically takes on a one weekend format. she’s only in town for a few days, and she sees buddy a number of times during that small duration. she meets buddy’s wife and is invited to be a part of the things that he and his wife are involved in. things boil up to a pretty great climax, that in no way lets us down.

Young Adult is a very good movie. it’s directed by Jason Reitman, who is a super smart and creative filmmaker. this is a guy, like James Mangold, who wants to experiment with film and see what kids of different genres he can tackle. Reitman has so far made the movies Thank You For Smoking, Juno, and Up In The Air. so far he has done only comedies, but he has really found different ways of exploring them and taking them in vastly unique directions. young adult is by far his darkest film yet, and while it is never hilarious, it is always very interesting. I like the way the movie has that small town feel, with the protagonist running into the same characters everywhere, in her fish out of water situation. it’s an enjoyable movie, with some pretty unique ideas.