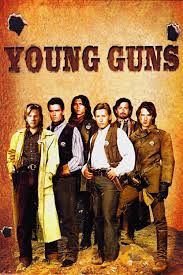 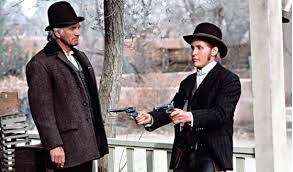 A decent western about a group of young heroes who band together to take on injustice.

Young Guns is an okay movie about a bunch of young men who are all taken in by a man named John (Terrence Stamp,) who has created a sort of family unit with them. When something happens to push these men into being independent, they go out seeking vengeance for a murder. There is a corrupt establishment in town, and that’s exactly who these boys target. What we get is a pretty typical revenge story. The humor and action are pretty good, but the movie’s big flaw is that it doesn’t make any attempt to let us know who the men these boys will be targetting are. There’s no list or flashback to the murder to show us who was there and who they need to go after. Other than that, the movie is pretty good. There are some scenes here and there, which don’t do much to push the story forward, and the characters certainly could have been more developed, but as a fun tribute of The Brat Pack taking on the West, this film works.

Young Guns is an okay western movie, meant to feel like the Brat Pack taking on that genre. It’s a movie about a bunch of young male actors who were extremely popular back then, in the eighties, starring Brat Pack front man Emilio Estevez. He was backed up by Kiefer Sutherland, also a huge name back then. Along with them, there was Charlie Sheen, Lou Diamond Phillips, and Dermot Mulroney. Then there was a sixth guy, played by an unknown actor. This crew of six was joined by veteran actors Terrence Stamp and Jack Palance as the older guys in charge. It was Stamp who ran the gang, and Palance who was the opposition, much the same way that Bruce Dern was the antagonist to John Wayne in the movie The Cowboys, with Wayne taking in a bunch of boys and training them in the ways of the west.

At the start of Young Guns, there is a pretty cool opening montage of the six boys standing out on a prairie landscape, firing out into the distance, like target practice. They aren’t necessarily firing at anything, but it’s more of a cool credits scene to show off each of their weapons and who the actors are. From there, we get right into the story with John (Stamp) riding into town with one of his boys, Doc (Sutherland,) right at the time that there is a fugitive on the loose. A hunting party is after the fugitive, and John catches sight of the man hiding behind the wagons and on the ground. This man is William (later to be called Billy The Kid, played by Estevez.) John motions for William to hop in the back of his covered wagon and hide there. Then John drives the cart off, and they take William in.

Once at John’s estate, William sees that John has actually taken in a bunch of men who have become a sort of family. Every night, John teaches them to read as they sit around a fire. The men are like brothers, and they joke around and insult each other. In a great moment, two of them are sitting around the dinner table, making cracks at William, or as they call it, “hacking” him. Then William is asked what he did to get the law after him. He tells them he killed a man. When asked what for, William responds, the man was hacking him.

The boys at the ranch get a visit from Lawrence Murphy (Palance,) who rides out with a bunch of men of his own and makes some accusations. He has had his supplies robbed recently and believes that it is John’s boys who have been doing it. Threats are made and things get pretty heated. Eventually, Murphy rides off with his men, but you can tell that this is just the start of a bigger problem.

The boys go into town one night and find themselves hanging out at a dance party. Doc starts falling pretty hard for a Native American girl, only to learn that she works for the enemy. Murphy is her employer. Doc asks around to find out more about this girl and learns the true story of how she came to work for Murphy. Apparently he brought in a shirt to be washed by a Native American woman once, and she accidentally ruined the shirt. As payment, he took the woman’s daughter as consolation.

It isn’t long before Murphy and his men kill John. That was kind of inevitable. He’s the old, mentor figure to the boys who needed to die in order for them to become independent and also have a reason for enacting vengeance. A man with a lot of pull in the town, Alex McSween (Played by Terry O’Quinn, better known as John Locke from TVs Lost,) wants something done about this. Everyone knows who murdered John and the sheriff in town plans on doing nothing about it, since Murphy and his men are the most powerful figures around. He doesn’t want to mess with them. That’s when McSween has another idea. He suggests the sheriff deputize John’s boys and give them some kind of legal authority to put justice into place.

And just like that, the boys are given jobs working for the law. They go after the men who killed John. The first of these is a man named Henry Hill, who William stakes out, while the man is in a tavern. He then follows the man into the restroom and shoots him dead before Hill ever has the chance to pull his weapon. There are other deaths like this, and at one point Murphy even hires men himself specifically for the purpose of going after these boys. They then have a couple of run ins with these “hitmen,” who have come to kill them and collect a reward.

All of this is kind of fun, but it’s also tough to keep track of. The problem is that we don’t really know who the villains are by face or name. Other movies have taken the vengeance story and handled it much better by either giving us a list (Kill Bill,) or at least having the protagonists replay the murder scene in their heads, to let us see the people they are targetting again, (The Crow.) Young Guns makes no effort to remind us who the villains are or to help us keep track of them in any way.

It also goes for humor more than it does for cool action scenes. The humor sometimes works and sometimes doesn’t, but great action would have definitely been preferable. An example of this humor comes when William, at this point known as “Billy The Kid,” finds himself speaking with one of those hitmen sent to kill him, while having drinks at a saloon. The hitman does not realize that he is talking to Billy The Kid, and so Billy has a little fun with him, asking the man to describe his target. Billy tells the man that he has seen this guy and says he sees him every time he looks into the mirror. The hitman doesn’t catch on, and so Billy starts whistling his famous tune. Now the hitman figures it out, and Billy shoots him dead.

For every fun scene like that one, there are also plenty of pointless, dull scenes, such as the sequence where the guys head out to the desert and all do payote together. This is the big scene for the Lou Diamond Phillips character, being part Native American, and leading them in a tradition of his people. Still, the scene doesn’t amount to much or add anything to the story. When we finally do get to the climax, with the men trapped in a burning house, it becomes pretty exciting. They come up with a clever idea to prevail and it makes for a solid climax. The movie as a whole is just okay. It definitely fits the vengeance formula, and has a number of enjoyable scenes, but there isn’t anything that feels especially new or original here. On top of that, most of the characters are very two dimensional, having little to do or to set them apart from the others. A much better western film about a team of men seeking vengeance on a corrupt town is Silverado. Sure, the men weren’t teenagers, like they are here, but that film put story first. Young Guns doesn’t quite do that. It is a fine film, but it definitely leaves some things to be desired.