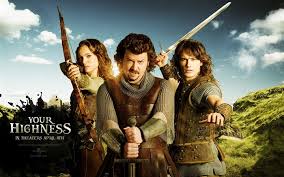 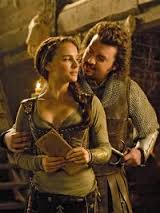 Your Highness is a movie that looks like it should be terrible and yet it somehow manages to do everything right. I’m still in shock about how good the movie was. Especially after that awful trailer. But all the pieces come together and really work. The action is fun and exciting, but it’s not because of the effects. It’s because of the humor. The movie is extremely funny and because of that, everything else is made better. We find ourselves laughing quite a lot in this movie, and after that, any cool action scenes are just a bonus.

I noticed just how much the humor drove the action when I thought about this movie compared to clash of the titans. that movie was lousy because the story was dumb, took itself too seriously, and ended up falling flat on its face. The effects were lousy, but the story lines, characters, and dialogue were what really ruined the movie . I mean, here, in your highness, the effects are also giant cg unrealistic looking monsters. but it’s done with such campy humor that you buy into it and go with the “what the hell?” attitude that the characters have whenever some massive monster busts out of nowhere.

The plot is intentionally corny. It’s about two brothers, one who is the champion knight of the court and the other is a total slacker who doesn’t even know how to handle a sword. The great brother is played by James Franco, and when his bride to be is kidnapped by an evil sorcerer, the boys must go on a quest together to get her back.

For the slacker brother (Danny McBride, playing the kind of role he plays best), this is of course his first quest. He’s probably never even been out of the castle before, and so watching him react to this world as a fish out of water is extremely fun. What makes it even better is that he doesn’t have a frightened attitude, but more of a “this is ridiculous, I don’t even want to be here,” attitude. He’s the angry comic if you will, cynical about the world around him and McBride plays it off perfectly.

The movie is filled with curses and sex jokes and that actually works really well because it holds nothing back. It’s the same kind of humor as was in Superbad and pineapple express. The cursing and sex talk is all the more funny because of just how vulgar it is.

The movie was directed by David Gordon green who is the same guy who directed pineapple express, and in many ways it is the same kind of movie. It’s an on-the-road adventure and a buddy movie. It’s got the same mix of blood and humor that pineapple express had. I remember before seeing that movie, I wasn’t sure how it was going to work. Was seeing a lot of blood and gore going to take us out of the humor? Turns out, the two ideas blended together nicely.

Natalie Portman and Zooey Deschanel are also on board, and it’s nice for once to bring a female presence of known stars into the mix of one of these kinds of films. Superbad didn’t really have that (Emma Stone only became a star after that movie) and Pineapple Express certainly didn’t have it (I can’t remember the last time Rosie Perez was relevant). But having these stars jump into the saddle for Your Highness is a sign that films like this are moving in the right direction of public embrace. After all, Natalie Portman is more Popular now than ever with her recent Oscar win for Black Swan.

The other signs that things are going well for these movies are that they tapped the same director to make the same kind of film, and that they threw a massive budget his way this time. Green is the guy who directed countless episodes of the Danny McBride HBO show Eastbound and down, and he completely gets McBride’s brand of humor and knows how to present it to an audience.

As far as having a movie take place in medieval times, I thought the English accents might get annoying. they didn’t. I thought the effects and giant monsters might be kind of stupid. Instead they turned out to be campy fun. And I thought McBride might be trying something new instead of sticking to his usual routine which we know works well. But he didn’t. Everything and everyone was dead on the money including James Franco who delivers one word lines pretty brilliantly, and Natalie Portman who was a tough and ferocious little warrior.

I’ve heard this movie be compared to evil dead 2 and army of darkness and I completely see how the comparison makes sense. All three of these movies are about fantasy and magic and adventure, but they are also meant to be campy and intentionally kind of dumb. that sort of humor goes a long way. It’s telling us that they’re in on the joke. Your Highness, a play on words title about highness or getting high, is the perfect follow up to pineapple express, complete with the action and Pot smoking of that movie and the sex humor of Superbad. It is the product of all these Judd Apatow produced movies that came before it, and instead of shying away from that and trying something new, it keeps the same successful beat right on going. It delivers the same kind of laughs that have been working, only this time it brings them into The