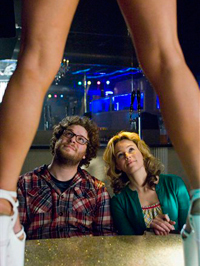 It’s somewhat funny and interesting for a while, despite it’s simple-minded plot, but things become way too routine and predictable in the movies second half.

Brief review: this movie has a simple premise and yet it is well-made and funny and gives us believable reasons that would lead up to this premise coming true. seth rogen is right at home here, playing his usual slacker-dude role and when he and his roommate, miri, lose their power and water, they decide to make a porno in order to make some money. of course a love story forms out of that, and it’s everything you could predict and would hope not to happen from what started out as a pretty fresh premise. it’s the parts that come before the love story that are good, and everything that comes afterwards that is lousy and cliched. if not for those later scenes, this would have been a much better movie.

the two of them have a major problem with the electricity and water being shut off in their apartment, and aside from that, they have two experiences which point them in the direction of deciding to make a porno. the first once comes when they are at the coffee shop and miri is changing in a back room with the door open. two teenagers who are sitting in the shop, spot this and grab their phone. they quickly turn on the video camera feature and record miri changing, showing her granny panties. then these guys post the video on the internet and it becomes a sort of sensation, getting tons of hits.

that’s when they have a breakthrough idea. use the coffee shop. as for a camera, zack is such a bad employee that his boss has installed a security camera to spy on him, and that’s what they end up using to film the movie. now the second half of the film begins. we get a bunch of scenes of characters who have been hired just for the movie having sex with each other. aside from jason mewes, there’s also traci lords on hand here, the porn star turned actress who is well-known even though she really hasn’t done much other than the movie cry baby and a small cameo in blade.

it isn’t long before it’s time for zack and miri to have sex. this is the scene that the whole movie has really been based around. i don’t mean the zack and miri movie, i mean the porno they are making. the key scene features the two of them, because they are the stars. they are so into each other that the two of them both refuse to have sex with anyone else in the movie. they film the scene and it is supposed to be like magic. unfortunately this is also where the movie starts to go downhill beginning with miri falling back on some sacks of coffee beans after zack has left the room, with a glow on her face as if she has just gone to heaven.

the cliched moments are just beginning at this point. we get two different scenes where each one of them thinks the other one slept with someone else. we get scenes where characters withhold information for no reason at all, and even though the other person is mad at them, this person just keeps letting the other one believe the lie. the whole thing is ridiculous. each one of them lets the other believe for some time, that they had sex with someone else. and then, of course, it is revealed that this isn’t true. there’s actually a third time this happens, all within about ten minutes. the first time is zack and this girl stacey. the second time is about miri filming a scene with lester in the movie. and the third time is when zack finds lester in miri’s bedroom. one time would have been acceptable. three is just overkill and stupidity.

while the movie plummets pretty hard in it’s final twenty minutes or so, it’s unfair to forget that for most of the movie this was something kind of fun. seth rogen fit this character really well, and his dialogue with delaney, among others, was pretty great. this guy is a natural comedic talent and here he is playing the kind of role he does best (as opposed to observe and report where he was playing a totally different character.) the movie has a pretty simple premise, but it finds ways to make it work and to make it believable. i like the way there were two different events which pushed them in the direction of making this happen. if only the ending were a little smarter and a little less cliched, this could have been a very good film. as it stands, it is just okay.