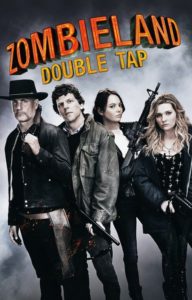 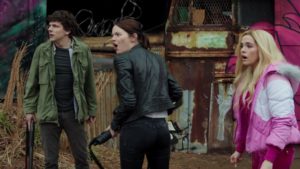 Not very funny or interesting, this one has very little going for it, other than it’s likable stars.

Here’s a movie that really didn’t need to be made. Another zombie movie, and this one being a sequel to a movie that was made ten years ago, and pretty much threw all of its creative ideas into the first film. There’s nothing new or fresh about this sequel. It was made simply because the stars of the first film have mostly gone on to have bigger and better careers since then. So they’ve got claims to their names, and the movie wants to take the credit for casting them in the first film to begin with, (all four cast members have been nominated for an acting Oscar.) But none of that says a thing about this movie, which has each of our characters find a romantic interest, and in one case even fall into a love triangle. The zombies are merely in the background, and that’s how you know you have a problem. This one is not very funny or interesting at all.

Did we really need a Zombieland 2 (or Zombieland: Double Tap, as it is called?) The first movie was made a full decade ago in 2009, when Zombie movies were around, but had yet to flood the world of entertainment. Since then, we’ve gotten close to every possible situation you can imagine, from Pride and Prejudice and Zombies to Abraham Lincoln: Vampire Hunter, (not exactly zombies, but pretty close.) We’ve gotten a ridiculous amount of games, (Plants Vs Zombies,) and TV shows, (The Walking Dead, I Zombie, Santa Clara Diet.) To say the market is over-saturated is an understatement.

So why make this movie? Normally when a sequel is made, years and years (and sometimes even decades,) after the original, it is for nostalgia purposes. Currently they are in production on a Coming To America sequel, for example. But this Zombieland situation is something different. This was a simple cash grab, and nothing more. This was a situation where the casting in the original film had been so good that three out of the four leads have been Oscar nominated for otter movies since the movie was made. In other words, the stars have become even more high profile then they were. And the movie is an attempt to cash in on that.

All four stars have Oscar nominations under their belts, but with Abigail Breslin, (the youngest of the foursome,) her nom cane from before the first Zombieland movie, with Little Miss Sunshine. And the reason why that’s worth noting is because while the other stars have all gone up in fame and success since that first film, Breslin has gone down. She’s not really in movies anymore. But for the others, things have only gotten bigger and better. Jessie Eisenberg was nominated for The Social Network, Woody Harrelson was nominated for Three Billboards Outside Ebbing Missouri, and Emma Stone actually won the best actress Oscar for La La Land. So it’s been big for these actors.

And to be fair, the first Zombieland was a good movie. It wasn’t revolutionary in any way, but it had some fun playing with the tropes of the genre and finding it’s own footing in a landscape that already had sent a lot, (Shaun Of The Dead, for example, another zombie-comedy, had already come out five years before this film.) But Zombieland has a handful of things going for it, including a long list of rules by one of its main characters, Columbus, (Eisenberg,) about how to avoid Zombies.

The rules are pretty basic and mostly comedic. And of course, double tap, which means to check that a zombie is really dead and shoot him twice before moving on, is one of them. Each of them is presented with giant colorful letters that appear on the screen and even interact with what the characters are doing. But these are all gimmicks from the first film. They are repeated here, in the sequel, but we need something more, and we don’t really get it.

Instead, we get a premise that starts out as the same old thing with the two girls,  Wichita and Little Rock, (Stone and Breslin,) taking off again. Throughout the whole first movie they kept ditching the guys, splitting in the middle of the night without goodbyes and all that. Well, they’re back at it again here, but at least the movie gives them reasons to leave. Columbus has proposed to Wichita, making her uncomfortable. And Tallahassee (Harrelson,) has taken it upon himself to be like a father figure to Little Rock, causing her to feel suffocated.

While they does give the girls the motivation they need to split, it also seem pretty forced. Especially in the case of Tallahassee, who never seemed to care about anything before, other then surviving. The father figure thing seems more like an attempt by the writers to find something for both his character and Little Rock to do. And getting the girls to go away enable  them to bring in a new girl for Columbus, which makes Wichita insanely jealous when she returns.

The new girl for Columbus story ends up being the main story to this film. Her name is Madison, and she’s very dim-witted and superficial. The movie has some fun with that, but it isn’t long before it gets tiresome and repetitive. And that’s when Wichita comes back and starts making fun of this girl. She’s bsck because this time, Little Rock has not only left the guys behind but she has also ditched her. Her own sister. And so Witchita wants help from the guys to find her.

And that becomes the premise of the second half of the movie. To go find Little Rock. The first half is about the girls ditching the guys, and then Columbus shacking up with this new girl. The second half is about the three of them, (Columbus, Tallahassee, and Wichita,) on a mission to find the commune or camp where Little Rock is staying. And on their way, they run into a number of other characters. There are the Luke Wilson and Thomas Middleditch doubles, (the joke is how similar they are to Tallahassee and Columbus, and it would have been a lot more funny if it wasn’t given away in the trailer.) It also includes coming across a got named Nevada (Rosario Dawson,) who ends up starting a fling with Harrelson. None of it is very interesting.

Here’s a quick way to know that this movie is out of ideas… Every character finds a love interest. In the first movie, it was just Columbus and Witchita and that made sense. But here, Little Rock goes off with a stoner guy, Columbus finds a second love interest, creating a love triangle between he, this new girl, and Witchita, and even Tallahassee ends up finding someone, with Nevada. When every character has more or less the same thing going on, you know you’re in trouble. When they have to resort to parodying themselves (the two guys who are replica versions of the other two guys,) you know you’re in trouble. And when they give that part away in the trailer, (so they even if you do find that part funny, you’ve already seen it before you’ve seen the movie,) you know you’re in trouble. This is a movie with nothing new to offer, that really didn’t need to get made.