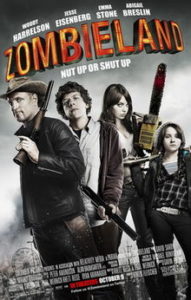 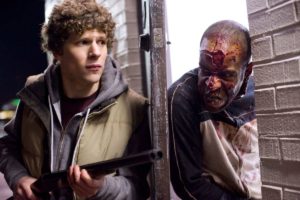 A fun and humorous zombie movie that finds ways to take a tired genre and make it feel kind of fresh.

Zombieland is a a pretty funny movie and a creative take on the zombie genre. This is a film about an unlikely pairing of characters who join together simply for companionship. The characters have very simple and basic goals, (to get a Twinkie, to go on the rides at an amusement park,) and they pursue them throughout the film. The humor is definitely there, from the very beginning with Jessie Eisenberg narrating about his list of rules for survival. But the story is nothing special, and is really just about a bunch of characters going from one place to another. What works about the story is the way that slowly throughout the film, they form a group. It takes a while to get to that place, as they first must deal with a number of double crosses. This element makes the movie kind of fun, even if it is easily recognizable that the missions and storyline are a little too simple.

Zombieland is the American version of Shawn of the Dead. Only instead of being a social commentary on slacker society, and how we can’t even tell the different between zombies and real people who are just drunk, like Shawn was, this movie is more about the comedy of outlandish characters and their charm. Particularly the two leads. It’s about the Jessie Eisenberg and Woody Harrelson character and how they survive in this zombie appocalypse and even keep a bit of a sense of humor about it. Shawn of the Dead came out in 2004, and Zombieland came out five years later in 2009. But both movies had a similar approach which was to take a zombie invasion and turn it into an easy-going comedy.

By easy-going, what I mean is that the characters are slackers. That was certainly the case in Shaun of the Dead, and is also apparent here. Especially with the Harrelson character, Tallahassee, whose life goal is to just get a Twinkie. The Jessie Eisenberg character, Columbus, is way more high strung. He’s the guy that survives the apocalypse because of his list of rules of how to be over-cautious and know the ins and outs of surviving. The rules, and the way they are presented to us are actually the best thing about the movie. They are always funny and always entertaining.

The way these rules are dealt into our laps is by Columbus using voice over to talk to us, the audience, about how he survives. He narrates to explain to us that survival really depends on following these strict rules, such as “Don’t be a hero,” and every time he tells us a rule, the rule appears in giant letters as part of the background. The lettering actually seems to be there, on the ground or beside the characters, and what often happens is as the rule appears, it appears with a humorous effect So, for example, when Columbus tells us the rule about “Always buckle your seat belt,” the rule comes on the screen from two sides, connecting together, like a seat belt buckling.

The safety rules idea really gets the humor level started off right. For one, it gives Columbus the opportunity to win us over a little bit, by spending time with him and listening to the funny things he has to say. And for another, it explains how such a guy could have survived for so long in this Zombie apocalypse. No explanation is needed for Tallahassee. He’s a rough and tumble badass, and Woody Harrelson plays him perfectly. In fact, part of the charm of this movie is it’s casting. The four person cast consists of Harrelson, Eisenberg, Emma Stone, and Abigail Breslin. Of the four of them, they have all been nominated for oscars, and three of the four of them (all but Breslin,) were nominated after Zombieland. That means they became bigger stars after this movie, and this movie had the foresight to see their potential.

In that department, Emma Stone is the biggest accomplishment. Back in 2009, she was not yet known at all. Her breakout film, Easy A, wasn’t until the following year, in 2010. And she went on to win an Oscar year later for La La Land, (and then get nominated two years after that, for The Favourite.) But after Zombieland, Eisenberg became a bigger star as well, with his biggest success, The Social Network. And Harrelson was nominated a number of times, one of them coming after Zombieland, with Three Billboards Outside Ebbing Missouri, a movie where he was especially great.

The story of Zombieland has Columbus and Tallahassee both out on their own when they run into each other and decide to work together. That means companionship, which is something sorely missing in this time. And so the two of them travel together and take on zombies together, as Tallahassee continues his quest to find a Twinkie. The character delve into this idea and why Twinkies are so important to him, with Tallahassee giving brief monologues about them that are pretty funny. And at one point, the character even come across a Hostess truck, (the company that makes Twinkies,) just to find that there are no Twinkies inside.

It’s ideas like this that make the movie good. During a zombie invasion, everybody’s mind would be on survival, and so Columbus’ list of rules doesn’t seem that far fetched, (it’s the way they are presented to us that is so especially creative.) But the Twinkie idea is just funny as hell. And so our characters travel around, somewhat aimlessly, looking for this and come across two girls who a plan they use on our protagonists. The girls are Witchita (Stone,) and Little Rock, (Breslin.) They don’t exactly want friendship or to just join up with our guys, although the second time the four of them come across each other, that’s exactly what ends up happening.

The band of four make it to Los Angeles where they have fun at a celebrities house who will remain nameless. It would spoil the fun. Let’s just say they do all kinds of things at this person’s house to pay tribute to the movies that he has been in. And it definitely works. The sequence even includes a few surprises. It’s not advancing the plot or anything with this, (although the sequence between Columbus and Little Rock, where he asks questions about her older sister that he is interested in, while they watch one of the celebrity’s movies, does advance the plot a little.) And the sequence is definitely a lot of fun.

From there, it’s parting ways again with the girls going out to pursue their goal, of hanging out at an amusement park from their childhood. It’s hard to know what the girls are thinking, in terms of turning on all these lights and rides that make loud noises and not expecting zombies to come. But you have to love the simple goals… the Twinkie and the amusement park, and the child-like mentality and simplicity behind them. And that’s what I meant earlier when I talked about these characters being easy-going. The goal here is to have fun. To enjoy themselves before they die. And it’s a unique goal to have in a zombie movie.

Zombieland isn’t anything great because the story isn’t great. The tone and humor are perfect. The characters are pretty good. Especially Tallahassee and Columbus. But the story is simply that these two guys meet up and join together, then find the two girls and travel together. Sure there’s romance in here, and a good deal of action and excitement, but the story itself doesn’t feel either deep or meaningful at all. Maybe that’s where the goal thing actually holds the movie back. Sure, it’s funny that the character goals are so simple and basic, but maybe if one of them, (maybe Columbus,) had a goal that furthered the plot a little more, this could have led to a stronger story. Comedy is one of the few genres that doesn’t need to have a strong story to work. All that matters is that the movie is funny. This one most definitely is.