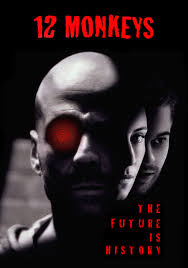 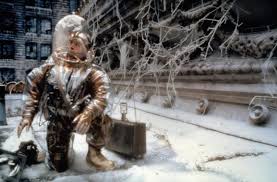 A very cool movie when you take the time to try to uncover the clues and ideas, but certainly not an easy movie to understand or appreciate.

Twelve Monkeys is a pretty wild thinkers movie. on the surface, it’s simply about time travel and a virus and who released it into the air. If looked at that way, then this movie is just a film about crazy people trying to find something. But the movie is actually about a lot more. Nothing is neat or easy to appreciate in this movie. Instead, you have a man jumping through time to different years of the past, and trying to gather clues. And the clues he gathers are not made easy to follow. That’s because the clues aren’t really the point of the story. The point of the story is his relationship with his psychiatrist and the reasons why she would actually believe him. This movie is dark as hell, but it definitely has a lot of clever ideas and creativity, and if one gives it the attention it deserves, the movie happens to be very cool and a lot of fun.

There are movies that are action-packed silly fun, check your brain at the door and just enjoy the ride, kind of things. 12 Monkeys is not one of them. In fact, it’s the exact opposite. It’s a movie with excitement, sure, but it’s a thinker’s action picture, and even calling it an action picture is really stretching it. This is more of a sci-fi / mystery / thriller. And if you’re not watching carefully enough, you might not realize that it’s a mystery at all, or what the mystery even was.

The movie is about time travel. It takes this topic seriously and builds an elaborate plot around a dystopian future, and trying to go back in time to understand how the planet got to be the way it is. People live underground in the future, because a deadly virus was unleashed to the public, killing hundreds of thousands of people. The movie is about one man, Cole (Bruce Willis) being sent back in time by scientists of the future to try to find the cause of the virus before it was released in the past.

What gets a little confusing is that Cole is sent back in time over and over again, and it’s always to a different year and different time period of events. Luckily the movie is smart enough to use years in order to help us keep track of everything, but we certainly have to be paying attention. The virus was released in 1996. The first time Cole is sent back, he is accidentally sent back to 1990. That’s where he meets a number of characters that he will again encounter in 1996.

At the start of the movie, we are with Cole in the underground world that humans now live in. It seems that he is actually in a prison, locked in a cell, and they call on him to volunteer for mission duty because he is good at remembering things. It would have been nice to see more of this future world and to get an understanding of what it was like for people who are not in prison and just regular citizens, but that doesn’t happen. As it is, we only really get to meet the prisoners and the scientists in this future time.

Before Cole is sent back in time, he is sent out to the earth’s surface to see what’s out there. This is the scientist giving Cole a test. They are considering using him for a much bigger mission, but first need to see how he does with this smaller and safer one. Will he try to escape while out there? Will he survive? Will he be good at collecting data? Cole does everything to their liking, including putting samples of insects into jars for them. Animals, which have “reclaimed” the earth’s surface, now overrun the earth and Cole has to avoid them on his mission, just to get back safely.

When he does get back to the underground prison, the scientists have Cole sit on a really tall electronic chair, and talk to him about his mission. They use a ball packed with cameras to talk to him, and the ball goes right up to where he is sitting, as if it is a giant electronic eye, closing in on Cole’s personal space. Is this eye meant to intimidate him? Maybe it’s another test.

Cole is sent to 1990 (even though they meant to send him to 1996), and here he finds himself in a mental institution. This is where he meets Dr. Railly (Madeline Stowe), who plays his psychiatrist. He also meets a fellow mental patient named Jeffery Goins, (played by a fantastic Brad Pitt.) The Pitt performance was Oscar nominated, and very well-deserved, as he plays a man who is so insane and full of conspiracy ideas that his mind seems to be going in at least ten places all at once. Pitt never stops moving his hands or speaking in super-fast tones. He totally owns this role.

About a third of the movie takes place in that mental institution, and it’s a bit of a turn off, since so many characters in there are crazy, or at least appear to be crazy. Terry Gilliam, a guy who does not shy away from the uncomfortable or disgusting, directed this movie. Many of his movies, such as Brazil, involve depravity mixed into a bleak future. Here, in 12 Monkeys, we get a lengthy scene, for example, where Bruce Willis sits crouched over with drool coming down off his lip. It’s not a pleasant image. The good news is, Cole is not crazy, or at least there’s a very strong chance that he isn’t. The future plot line seems real enough, although he might be crazy in other ways because he does keep talking to a voice that he hears in his head.

The movie really gets good in it’s second half. That’s when the roles change and suddenly Dr. Railly has bought into the whole “man from the future” idea, and Cole suddenly thinks that maybe he really is insane. The obvious mystery is how does this virus get into the air, and there’s a cool red herring plotline, involving what Jeffrey has been up to, but that much is all pretty straight forward. A much more creative mystery is why does Dr. Railly suddenly start to believe Cole’s story? There are many clues, and a story about a little boy trapped in a well is just one of them. Cole tells Railly about how the boy is really hiding and where he is hiding, and of course, Cole turns out to be right. But then there’s a bullet found in his leg from World War I, the fact that Cole keeps escaping or disappearing from situations that it would seem impossible to escape from, and finally, a very cool moment where Dr. Railly leaves a message and Cole knows what she said, even though he was nowhere near she. That’s because the message was played for him in the future.

As far as time travel movies go, this one is pretty great. There are so many elaborate ideas at play here, including a recurring dream that Cole has been having and what it means. Another cool idea that occurs to Cole after he visits Jeffrey’s house in 1996 is that maybe he is the one who put the virus-spreading idea in Jeffrey’s head, back when they were in the institution together in 1990. If he hadn’t mentioned it to Jeffrey, maybe none of this would have ever happened. The only other time travel movie that I’ve seen which is this thought provoking is Lopper, which also happened to star Bruce Willis. Back to the Future, another great one goes more for comedy than for elaborate twists. 12 Monkeys isn’t for everybody. It’s not a happy movie or a feel good movie, and certainly not a movie that is easy to get a grip on. But there are lots of wonderful ideas that are worth taking the time to uncover. There’s just so much going on here, including Cole making an unexpected decision and a sacrifice at the end, and understanding the reasons why he would choose to do this. It’s definitely an elaborate and well thought out film.