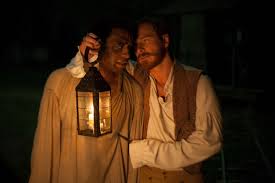 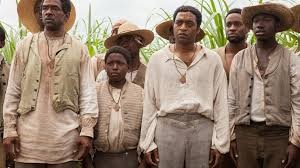 The movie definitely has an epic and at times, powerful feel, but it is also long, slow, and tiring.

This film is dramatic and powerful and all of those good things that one would hope for, except that it somehow takes what is working and then just stops doing it. The movie is great in the first half, but lousy in the second. it goes on for way too long and just holds still on shots of a character not even moving. It’s the story of a freed man in the north who is kidnapped and forced into slavery. During the course of the lenghty movie, he is under the ownership of three different authority figures. The first, a slave trader, played by Paul Giamatti, is great. So is the second, played by Benedict Cumberbatch (it helps that there is a villain working on this plantation as well, played by Paul Dano.) But it’s the third planation, that of Michael Fassbender, where things start to get tiring and lose our interest. The movie goes for artistic when it should be going for keeping our attention by entertaining. It is too long and too slow in the second half, and that really hurts the overall momentum.

12 Years A Slave isn’t even close to anything special. Sure, it’s cool that the movie is based on a book, which is the real account of a man who was once a slave, but that doesn’t necessarily make for a good movie. The film is two hours and twenty minutes and it feels way too long. That’s probably because it goes for being overly artistic every chance it gets.

The movie is the second film by director Steve McQueen. His first film was the movie shameless starring Michael Fassbinder as a man addicted to one nightstands. That movie was so weird that it wasn’t even watchable. At least 12 years a slave has got that beat, although you can see in that movie how this director strives for art more than he does for story. It’s a matter of having his priorities in the wrong places. Now, granted, the movie won the best picture Oscar last year, but that’s an unfortunate result of the academy feeling a need to honor this movie simply because of it’s subject matter and epic feel.

The film itself is just okay. It’s the story of Solomon Northup, a freedman and well-educated, upper class black man living in the north. He lives in Saratoga with his wife and children and plays the violin as a hobby. Solomon socializes with white men in this town and is an upstanding citizen. One day a friend of his asks if Solomon will accompany two men who want to take him along as a travel companion who can play the violin for them on their journey.

Solomon agrees and no sooner do the men get him drunk and passed out, does he find himself waking up to be all chained, lying on the hard floor of a prison cell. Solomon can’t believe it. He is in shock as he shouts out and calls to the men who have imprisoned him, insisting that he is a freed man. He is now in the holding cell of slave traders who plan to sell him at an auction. When the traders come in, the make Solomon recant his story and say that he is not a freedman. They whip him until he says this, only he never does.

We see Solomon join up with two other educated freed men who are being wrongfully imprisoned (one is played by Michael k Williams, Omar from the wire.) we also see as a woman is brought in to see her son only to be kidnapped herself and forced to become a slave. It’s pretty horrific how the slave traders kidnap her son first and than use that to lure the mother and her daughter in. when one of the traders approaches her at night and Michael k. Williams tries to stop him, the trader stabs the man, without ever blinking an eye.

Paul giamatti plays the first man who is in charge of Solomon as a slave. Giamatti is not playing an owner, but a slaver, who sells these slaves to plantation owners. He is a salesman and when the owners come to visit, giamatti shows off what a fine product he has. He makes a young boy run in place, lifting his knees as high as he can to show off the boy’s strength. Giamatti doesn’t have many scenes in the movie (no more than three), but they are all pretty interesting.

The same can be said of the scenes involving the first slave owner who Solomon goes to work for. This owner, ford, is played by Benedict cumberbatch, and he is a good man who treats his slaves well. Ford is a religious man who believes in kindness. Unfortunately he has a man working for him on the farm who does not. This is tibeats, played by Paul dano, as a man who insists on giving the slaves a hard time. When he yells at Solomon for not attaching boards to a wall correctly, Solomon sticks up for himself. When tibeats tries to beat him, Solomon gets the upper hand and is the one who does the beating.

This results in tibeats becoming furious and attempting to hang Solomon. It gets so bad that ford has to approach Solomon one night and tell him that it is no longer safe for him to stay on this farm. Tibias wants him dead too badly. And so ford sells Solomon to another slave trader who is supposed to be just terrible to his slaves. This is Edwin Epps, and he is known as a “slave breaker,” because of his abusive ways.

It’s the fasbender segment of the movie that really drags on. it seems like nearly an entire half of the film takes place on this plantation and unfortunately it’s the least interesting of the places where Solomon has been. Fasbender doesn’t prove to be as sadistic as we’ve been led to believe until a scene that comes very late in the movie where he whips a female slave. Instead, he just seems like a jerk, but certainly not the evil villain we have been led to believe. There’s even a scene where he chases Solomon around and instead of taking a beating, Solomon runs away. This causes Epps to fall in the mud. You would expect that when he got up, he would beat Solomon even worse for running away, but nothing comes of this scene as any kind of retaliation.

The movie is definitely interesting and it’s first half is actually pretty good. It’s the second half where things really start to drag. There are way too many artistic shots where the camera just holds still on a single image. One comes when Solomon is left hanging from a tree with his feet touching the ground. The camera stays on this image for a very long time. Another is just a close-up of Solomon’s face to show that he is thinking. It’s like the moment in boogie nights with mark wahlberg on the couch at the house where he is ripping off a drug dealer, and the long close-up on his face. Only there it was pretty cool, (probably because of both the music and the comedic situation they were in.) here, it just feels like one of many things that could have been cut in order to shorten the running time and keep us entertained. The first half of this movie is far better than the second half, and the fasbender owner is absolutely the least interesting. It’s not a bad movie, but it definitely needed to cut some things out in order to stay focused and keep our attention.