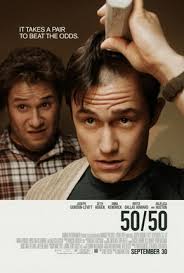 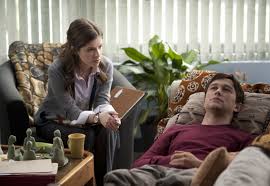 Predictable, yet funny and powerful, this is a well-made movie.

50 / 50 is a movie that shows how to do the best-friend-has-cancer as a comedy story and do it right. A few years earlier, the Judd Paotow team tried making a movie just like this with Adam Sandler. It was called funny people, with Paotow himself, directing, and Seth organ was once again playing the best friend. That movie was a mess, completely unfunny, too long, and more depressing and dull than anything else. Well, organ gets the chance to redeem him with 50 / 50, playing the same sort of role, and he does wonders with the part.

Joseph Gordon Levitt plays the boy with cancer, Adam, a radio programmer with a hot girlfriend (Bryce Dallas Howard), and an otherwise pretty normal life. Adam plays it safe in everything he does. He doesn’t smoke or drink and at the start of the movie we see him refusing to cross the street while running until the light turns green for him, despite there being no cars anywhere in sight.

We meet the Seth Rogan character, Kyle, pretty early on too, and right away he shows us that he will be the source for comedic relief throughout the film. He smells Adam’s hair, (Adam just used his girlfriend’s shampoo), and says that Adam smells like he just slept with the cast of the view. Then at a coffee shop, he tells Adam about screwing up his back once, doing it foggy style and then starts explaining what foggy style is. This is Judd Paotow-like writing, the kind that organ must have picked up along the way, spending time in his shows like undeclared and freaks and geeks, and then his movies like the 40 year old virgin and knocked up. It is rich comedic writing and it propels the movie along by making us laugh.

It isn’t long from here before we find out that Adam has cancer. He goes to a doctor who happens to be the worst doctor in the world with no bedside manner at all, and has to interrupt the doctor speaking gibberish into a tape recorder to ask what the hell is going on. The doctor starts talking about Adam having a tumor, but as soon as he mentions the word cancer, everything Adam hears has a buzzing-beeping sound. It’s as if he can’t hear anything else. None of the details the doctor says now are important. All he can focus on is that he has cancer.

He goes home and tells his girlfriend, Rachel, and even offers her an out, saying he doesn’t expect her to stay with him, but she does anyway. And she’s there with him when he tells his parents. His mom, played by the great actress angelica Huston, is completely overbearing and annoying just the way a long island mother might be. And his dad has Alzheimer’s and can’t remember anyone let alone follow what’s going on in the conversation. When the mom asks Adam who will take care of him, there is some hesitation at the table before Rachel speaks up and says that she will. That’s a sign of things to come.

Kyle is the one who takes the whole thing harder than anyone. He’s the supportive friend who can’t believe what he’s hearing. He asks Adam for more details including a picture of the cancer and gets it out of him that his survival rate is 50 / 50. “If you were a casino game, you would have the best odds,” he comments. If only his friend wasn’t stuck with this girlfriend who doesn’t fill any of his needs in bed, maybe Kyle could help Adam out with learning to live again. And then one day, an opportunity comes.

Kyle wants Adam to use his cancer to help him meet girls. Since Adam refuses because he has a girlfriend, Kyle does it instead. He goes up to a girl at a book store, talks about how his best friend has cancer and he wants to be there to support the little guy, and ends up getting the girl’s number. Then, on his date with this bookstore girl, he sees something that not only affects him, but also affects Adam. And Kyle busts into Adam’s house that very same night to tell his friend the news.

Meanwhile, Adam starts up a sort of friendship with his young hospital-provided therapist. Anna Kendrick plays her from Up In The Air, and she is the perfect all-work-and-no-play actress for this part. Her character, Katherine, is new to therapy (Adam is only her third patient,) and uncertain of how to do things. The movie has fun with that, with Adam calling her on awkward moments like when she touches his arm to comfort him and it ends up being stranger than anything else. His scenes with Katherine are great, especially when she gets him to open up about his mom and he makes realizations about how hard things must be for her, between having to deal with both him and also his dad.

The movie works nicely by alternating between comedy and dramatic moments. It does have a number of clichés to it, that we can see from a mile away, but that’s okay because the comedy keeps it alive at all times, even when the story becomes routine. Adam ends up becoming single for a while and learning how to work that angle under Kyle’s tutoring. That’s another fun subplot. And his friendship with Katherine gets even stronger when she gives him a ride home from the hospital one day and he ends up cleaning out her car.

The movie is fun. It is surprisingly more light-hearted than most comedies, despite it’s depressing subject matter. That is mostly due to Seth Rorgan that is completely on top of his game here. Rogen’s long time friend who once had cancer wrote the movie based on Rogen encouraging him. And you can bet that rogen, also a screenwriter (he wrote Super bad), helped fine-tune it. Especially his character and dialogue. That makes a big difference. Rogen owns this character and the movie has a lot going for it in plenty of other directions too. Gordon-Levitt does a nice job with his part, playing the simple, kind, and often frustrated with his mom, young man. There’s a great moment in the hospital when his mom asks for a blanket for him, despite him actually being hot. That kind of comedy, even when rogen is not on the screen, is what keeps this movie afloat at all times. The plot is the only thing that doesn’t always work great for the film, being predictable and also similar to things we have seen before. It might not be the strongest story in the world, but the smart comedy angle makes it all flow nicely.