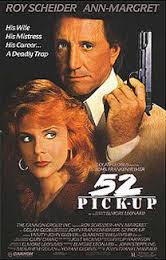 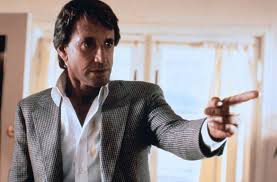 A dynamite thriller that is as creepy as it is exciting, with its edge of your seat twists and momentum.

52 Pickup is the movie that the seven ups should have been. Of course, that was a police movie and this is an average guy trapped in a conspiracy plot that turns into a murder thriller, so there are significant differences. However, both movies star Roy Schneider, were made in the seventies-eighties, and have a plot revolving around serious crime. In addition, whereas that movie was slow, dull, and a French connection wannabe (another Roy Schneider seventies movie), this one is completely fresh and invigorating, and exciting as hell.

The movie is about Harry (Schneider), a guy who runs a steel company and is having an affair with a woman much younger than his wife. He goes to meet this woman in a motel room and three guys are there with masks and guns. They make him sit down and watch a video of him with the younger woman and they threaten to send it to his wife. Therefore, the blackmail scheme begins.

Harry leaves the motel uncertain of his next move. He does not even know how or when these guys are going to contact him to get their first payment of his money, but he has sure he will find out soon enough. While he is trying to make sense out of the situation, the movie takes us to a party where we meet the three guys who were holding the guns. We know to watch them because the girl, Cini, is there at the party too. However, we do not know that these are the guys just yet. Aside from Cini, and these guys, we also meet one of Cini’s friends, Doreen. She will have a significant role in the winding plot as well.

Now it is time for the first payoff. The guys order harries to go to a baseball game and give him the tickets. Once there, in the seats, a hotdog deliveryman comes where he is sitting to get the money. He gives it to the deliveryman, the deliveryman gives it to Bobby, one of the three guys (Clarence Williams III), and he drives off with his two friends. In addition, it is only once in the car that they open it and see that there is a note that tells them to go screw themselves. Now it is time to get angry.

In the scariest moment of the film, the three guys kidnap harry and make him watch a video of what they do to Cini. They have her tied up and topless, sitting in a chair, and put a wooden board in front of her. Then they shoot it, repeatedly. When they are finished, they lift the board off the lifeless girl to show that the bullet holes went through. If harry does not pay, either he or his wife will be next. Therefore, harry decides to get serious.

At this point, the movie has gotten good. Starting here. Harry will now go on his own one-man rampage investigating who these three guys are and how he can reach them himself. In addition, this murder scene is the moment that kicks it all off. In addition, the moment announces to us, this is an intense movie. The guys with masks and guns who held him up in the hotel room at the start of the film got us interested, but this murder scene is what puts us on the edge of our seat. It is horrifying, but it is the jolt that both Harry and us needed to get us going and fully invested in this movie.

At this point, we are nearing the second half of the film, and it will be all about harry targeting these guys. He is not a vigilante like Charles Bronson or anything, but he is smart enough to do a little detective work and figure out just who they are. He goes to the strip club where he has been told Cini worked, and he meets with Doreen. Harry knows she was a Cini’s friend and he asks her questions.

However, the movie does not make it so simple for him that she would just tell him anything. Instead, she tells him in code and he needs to use that code to go through his wife and her business connections to figure more out. One thing I love is the way Harry snaps Polaroid photos of all the guys on his list. The Polaroid is so big, bulky, and flashy that it is as if he is rubbing it in their faces every time he snaps one of their photos.

The movie goes on to have harry find all three of the guys and yet still agree to pay them. Only him knowing who they are is enough to put them on edge and that is exactly what he was hoping for. This movie was directed by John Frankenheimer who made two other great older films, the Manchurian Candidate and seconds. He also made ronin, the fantastically detailed Robert Deniro spy thriller from the late nineties. Frankenheimer also had many duds, like reindeer games, but when he was on his game, he was sharp as hell. In addition, 52 Pickup is one of his best. The plot moves quickly and is always suspenseful. In addition, every scene is shot like a work of art.

The movie is a tense thriller with Roy Schneider going after his enemies and turning the tables on them. But he needs to figure out just who they are first, and that’s where the mystery and detective work come in. This is the kind of movie Hitchcock would have made if he was still making movies in the eighties. One of the smartest things about the film is that it gives us three bad guys instead of one, makes them all distinctly different, and makes the plot in large part about learning who these guys are. Then there is the way Frankenheimer keeps what the men want so simple. A movie today would have had the men trying to use the tape to make hurry’s wife drop out of a political race she is in. I could see that kind of movie in the hands of someone like tony scot or Jonathan Demme. These days it is all about being political and trying to wrap the crime up in a thousand other motivations and twists. However, Frankenheimer knew better. There did not need to be a sudden end twist revelation. There just needed to be uncertainty, creativity, and excitement. In addition, in all of these ways, 52 Pick-Up delives.