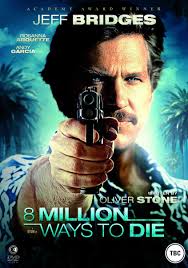 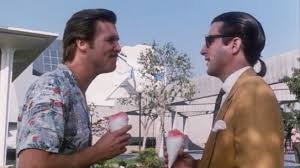 With a plot that wants to be The Last Boyscout meets 52 Pickup, this movie unfortunately isn’t half as good as either one of those.

8 Million Ways To Die might have been interesting if it wasn’t just composed of recycled parts, or if it had found a way to actually improve on other films. Instead, it is like a less exciting and less interesting version of movies we’ve seen before. The story is about a detective who is hired by a prostitute to watch her back. She knows somebody’s trying to kill her. And of course, she is killed, pretty early in. that means the detective has the rest of the movie to go and find her killer. Only in this film, it’s not really a mystery who did it or why. That is just one of many mistakes the film makes. I like the plot, but i liked it much better in other movies when it was done right. There are good actors on hand here too, from Jeff Bridges to Andy Garcia to Rosanna Arquette, but their talents are pretty much wasted in this film.

8 Million Ways To Die is a movie that we have seen done better before. Much better. There is not much very good going on here, and anything that is halfway decent is certainly not fresh or new. This is a movie about a guy who is hired by a prostitute who thinks she is in danger. The guy takes her case and sure enough, she is murdered. Now he is spending the rest of the movie trying to find out who killed her and why.

So far, every bit of it sounds like the last boyscout. Instead of a prostitute here, it is a stripper there. Otherwise, the plot is the same, up to and including a woman who hired our detective being killed off early in the film. Only in that movie, there really was a mystery to who killed her. Bruce Willis had to spend the movie getting deep into corruption that involved illegal gambling and a professional football ring. Here, the girl knows exactly who it is that is trying to kill her, or at least who the small group of people is.

What I mean is, there are only two suspects. It is not one of them, so it is the other. In addition, there is not even any cool way of figuring out that it is not the first guy. To go back to the beginning, it is sunny who hires Matt Scudder to protect her. That is because she is trying to get out of the prostitution business and knows there is going to be a backlash when she tells the people who employ her.

These people are apparently not pimps, but just guys who pay for her home, outfits, and lifestyle and throw many parties. Chance is the man who employs her and throws all of those parties, and so he is naturally the first suspect when she is killed. Only the amount of questioning or speculation over whether he did it or not is simply he telling scudder to get off his case and that he’s not the one responsible. That is about it.

Before any of this happens, we meet scudder while he is still with the police. He has a case where they bust in on a drug dealer while the dealers is with his family. The man pulls out a baseball bat and scudder is forced to shoot him while the man is with his kids in the kitchen. That is what scudder has a time with. That and the inquisition by his own department afterwards. They want to know why he fired on a man who did not have a gun. Scudder assures them that just because he did not have a gun do not mean that he was unarmed. In addition, following this mess, scudder quits the police and becomes an alcoholic detective.

Now Scudder is hired by sunny, and he takes the case and goes out to one of those parties in the Hollywood hills to meet all of her associates. There is no point to this scene, other then to introduce us to the characters that will occupy this world and really just be our suspects. The only problem is that there are just two of them. If there was a group of suspects, of about four or five, this could have been really something.

Having only two suspects narrows the amount of scenes we get of scudder pursuing characters and it really narrows the scope of the mystery. Aside from chance, the other suspect is angel, a frequent client at the parties, played by Andy Garcia. The other character we meet there is another prostitute named Sarah, played by Rosanna Arquette. If she were a suspect too, maybe the movie could have had an interesting angle. However, of course, she is not.

Sarah gets the generic role of being the former friend who now has to help scudder as his sort-of sidekick. At one point, they even have a romantic scene where they nearly get it on. He has the same kind of scene with sunny too, before she is killed. This movie has a very short list of ideas and an even smaller plot, and so it just throws whatever it can think of at the screen, hoping to fill up the time.

I like the idea of a mystery where a main character is killed early on (like Psycho), and then we spend the rest of the film trying to put the pieces together. It is exactly the reason why I like The Last Boyscout so much. Only this movie is a series of missed opportunities where the potential is there, and the movie just keeps making all the wrong choices. In 52 Pickup, there was also a murdered woman early on and a group of men who ran prostitutes and were responsible. Only that movie has multiple villains and went for an angle where we did not know what was happening at all times. We were surprised and kept curious.

In 8 Million Ways To Die, everything is predictable. There is a fine cast here, and in fact, that is probably the best thing about this movie. A young Jeff Bridges is entirely believable in the Phillip Marlowe kind of role. He is going for a long goodbye kind of vibe and he pretty much pulls it off. Rosanna arquette is fine as the friend role, and she looks about as good in this movie as she ever has before. In addition, Andy Garcia pulls off the sleazy villain perfectly. The problem is not in the performances. It is in the story. With nothing new to offer and a series of missed opportunities, this film falls way short of the mark.