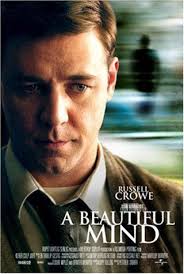 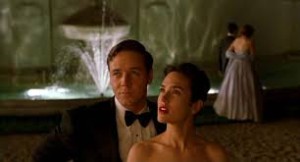 An unusual film about a mathematician and his extraordinary life, told as a genre bending drama/thriller with extremely powerful performances.

A Beautiful Mind is the story of a mathematician who is both brilliant and crazy and somehow loses complete control of reality. He tries desperately to recover and to solve the problem himself, and he does this by drawing mostly on his romantic marriage for inspiration. We’ve all seen plenty of romantic films where one partner inspires another to do great things, but this movie is unique in the way it gets into a character’s head and brings him down to a place of darkness and depravity that most feel-good movies would try desperately to avoid. That place is one of delusions, hallucinations, and paranoia.

Russell Crowe plays John Nash, a Princeton University graduate student who is socially an absolute mess. And that’s before he goes crazy. At the start of the film, he is extremely awkward and not only doesn’t know what to say to people, but also doesn’t realize how crazy and offensive the things he does say will end up sounding.

Nash spends the first portion of the film searching for his original idea. He doesn’t know what it will be or where it will come from, but he knows that he can do it and that it’s just around the corner. With so much time devoted to his pursuit of an idea, the movie does a poor job of actually explaining what the idea is. It has something to do with game theory and competition, but it must be infinitely more extensive than the one, two, three version the movie gives us. We might not be mathematicians, but it treats us like we’re all a bunch of dummies that wouldn’t be able to understand anything more complicated than a blonde at a bar and why three chances are better than one.

Fortunately the movie moves on rather quickly and gets into the fear and paranoia brought on by The Cold War and McCarthyism. Nash is recruited by the military to help decipher codes and the next thing you know, there are armed men following him around every corner. Nash is brought to the pentagon twice, has a code implanted into his arm, and reports directly to frontman Ed Harris.

But all of this starts to come crashing down as Nash experiences more and more life threatening situations and finds himself keeping everything a secret from his wife. When he rushes her out to her mother’s without giving any explanation at all, you know things aren’t going so well.

Nash suffers an extreme breakdown and it has to be dealt with. His wife, played by Jennifer Conneley, is incredibly supportive and caring. She stands by him with every decision he makes, including telling the doctors they’re wrong and that he can handle the problem himself.

Part of the movie is watching Nash dig himself deeper and deeper into the hole, burying himself in government secrets and espionage. The other part is watching Nash pull himself back out of it. The plot could easily be a mess if not handled with the right precision, but director Ron Howard finds ways to give us real moments that we can believe and even relate to.

This film is Ron Howard’s stunning achievement as a director. He won an oscar for directing the movie and the movie won the best picture of the year academy award. As director, Howard weaves everything together seamlessly, giving us fascinating characters who aren’t necessarily the best people in the world, but are certainly interesting.

Russell Crowe delivers the best performance of his career as John Nash. He won the oscar the year before for Gladiator as the academy desperately wanted to redeem themselves for not giving him a win in the supporting actor category the year before with the Insider. Boy did they get it wrong. The Insider was worthy and Gladiator was not. And A Beautiful Mind was the best film of the bunch. The academy knew it to be true, giving the movie the picture and director honors, but wasn’t ready to give Crowe the best actor of the year award two years in a row.

Politics aside, the movie is a fascinating beast. It might do a lousy job of explaining the mathematics of Nash’s career, but it does a wonderful job of explaining both his paranoia and also his method for recovery. Ron Howard tells an inspiring tale here and does it by holding nothing back. He’s not afraid to let awful things happen to his main character in the name of medicine and knows that to get the audience involved, you often have to go to extreme lengths and take risks. With this movie, he shows that he is a director with great talent and storytelling ability. A Beautiful Mind is his masterpiece.