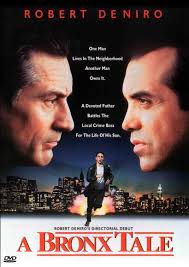 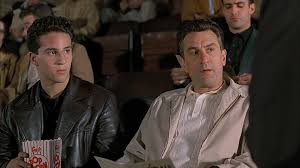 A very cool movie about an Italian neighborhood in the sixties where the mafia ran the streets and growing up meant being torn between different influences.

there is no question about it; the influence of Goodfellas is felt in this movie with everything from the environment to the story. Only a Bronx tale is about something more. This is not just another story about organized crime, but instead is about the people who have to live with it in their backyards. In addition, while this movie might start out the same way as Goodfellas, with the protagonist idolizing the gangsters outside of his window, it certainly veers off into new and unexpected directions after that. The first half of the movie is about the gangsters, but the second half nearly leaves them behind to focus on the racial violence that is surrounding the neighborhood youth. It really works to the advantage of this film that it is not solely a gangster movie, but more about the neighborhood and the characters who are growing up there.

A Bronx Tale is a great film. A gangster movie has told more as a neighborhood film than as an organization film. This is almost like a companion piece to Goodfellas, giving us the fish out of water point-of-view of a kid who watches the gangsters across the street, knows all of their names, and longs to be one of them. In addition, that kid is brought in, only unlike Goodfellas, he never really becomes one of the inside guys. Instead, he is treated like a son to the head mafia boss, sonny (Chazz Palminteri,) and this creates a whole new way of looking at the situation.

Part of what sets this movie so far from Goodfellas, despite the films starting in much the Same way, is that in A Bronx Tale, the main character, Calogero, has a very strong father figure. This is Lorenzo, played by Robert Deniro, and he is a hard-working bus driver who refuses to take money or do jobs for the mob. Instead, Lorenzo believes in the workingman and tries to instill these values in his son.

That is not always an easy battle, however, with his son seeing the kinds of cars the gangsters drive and clothes the gangsters wear. He sees the way they are living the life with everything right in the palms of their hands. Because this is a movie about growing up and about the neighborhood, it spends much more time with the child actor than any other gangster movie does. This movie keeps Calogero as a kid for nearly half of the film, giving us a big story that develops long before we move to the second half and adult version of the boy.

The movie starts with Calogero’s voice over describing the gangsters and how great life was where he lived. We get a real period; fifties feel complete with great music and atmosphere. There are many shots of the teenagers back in those days, riding around in their cars and flirting with members of the opposite sex. Calogero and his friends are just boys who sit on the stoop looking across the street, watching the gangsters and doing imitations.

Then one day, there is a shooting on the street. Calogero witnesses it, and what appears to be a parking spot argument with two men getting out of their cars, turns into sonny shooting one of them down. His men quickly rush him off, but the police show up and get a tip that Calogero was a witness to the shooting. The police take Calogero down to the street and make him look at each of the men who were there, asking for the shooter. Calogero refuses to give sonny up, and just like that, a friendship is born.

Sonny starts reaching out by bringing Lorenzo in and offering him a job. Sonny doesn’t want to change Lorenzo’s whole way of life, he’s not looking for a new foot soldier, but instead has crafted a way that he can get Lorenzo some extra money. It involves Lorenzo transporting things on his bus routes for sonny. Lorenzo refuses and so sonny decides to approach the son. He starts showing a liking to Calogero, taking the boy into the restaurant where he hangs out, and down to the basement to participate in their games of craps.

Sonny does not want Calogero to be like him that is the reason why he never really gives Calogero a job or lets him see exactly what the business is all about. Instead, sonny tells the boy to stay in school, and stay away from trouble. Because sonny is so careful about hiding the violence from Lorenzo, there is surprisingly not very much violence in the entire film. There is only one real scene of violence, with sonny and his men beating up a group of bikers who are asking for it as much as possible. Other than that, most of the violence in this movie comes from Calogero’s friends, who are out to prove they are the neighborhood tough guys, even if it costs them their lives.

One story that crops up in the second half of the film involves a girl named Jane who Calogero takes a liking to. He meets her on his father’s bus one day, and falls head over heels in love. There is only one problem. She is black. Calogero does not really care about this at all, but his friends and the neighborhoods around him certainly do. They look at the racial difference as a big deal. Calogero gets angry looks and threats in both his own neighborhood as well as Jane’s.

The racial conflicts take over much of the second half of the film, bringing new life into the movie that was absent from the first half. I like that it does not affect everything, and never really has a place in sonny’s story. I also like that it is a problem among the youth (neither sonny nor Lorenzo ever has a problem with other races), as both the black teenagers and the white teenagers seem to be out to prove their dominance over the other. It starts with Lorenzo’s friends beating up some black kids who ride their bikes through the neighborhood and ends with destruction and death.

The thing that is so fascinating about this movie is that the racial violence is just one of many subplots in the storyline. This movie is about the neighborhood and it is changing ways. It’s about the father figures who impacted this kid and how they both led him to be the best of the group of friends that grew up there. Calogero might get into that car with his friends, out to do terrible things to people of another race, but he does not share their mindset at all. Between his dating Jane, and his wishing a way to get out of the car, this guy has mixed feelings. He was conflicted in the first half (his father vs. sonny), and is now conflicted again in the second half, torn between the girl on one side of the tracks, and his friends on the other. A great movie can handle this much story without ever feeling forced. We do not get to see enough of the gangster world, and certainly are left wanting more, but I suppose that is the point. It is certainly the same way Calogero feels. Always an outsider looking in.