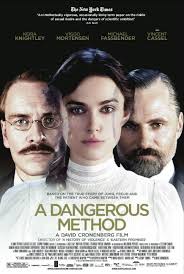 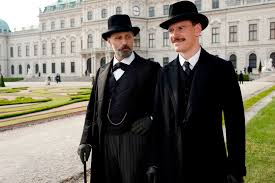 A Movie about the relationship between Sigmund Freud and Carl Jung seems like a good idea, but this one is handled with way too much dialogue and way too slow of a pace.

What should have been a great film ends up being pretty slow and dull. There are lots of reasons for how this happened, and none of them are very good. The movie should have been about the rivalry between Freud and Jung. Instead, it is about an affair with a patient. It should have been about practice and different experiments and techniques. Instead, the patient gets cured in the first act of the movie, and from there the film becomes about a relationship. This is David Cronenberg stuff, a director who is a master of the dark. Sometimes it’s disturbing sci-fi (The Fly, The Brood), other times its suspense / drama (A History Of Violence, Eastern Promises.) This movie is neither one. While it is somewhat dark, it doesn’t come close to the kinds of things we expect from this director. In fact, it is probably the most mainstream of all of his movies. Now there are definitely things to like about the movie, starting with it’s opening, but with each new act, the storyline gets worse and worse.

A Dangerous Method is a movie that had a lot of potential. First off, it’s the film about the disputes and theories of Sigmund Freud and Carl Jung. Secondly, it uses one of their patients to help tell the story, which would lead one to believe that it is going to be about practice and techniques as much as anything else. And then on top of all that, it is directed by David Cronenberg, and stars his muse of an actor, over the last ten years, Viggo Mortensen.

Unfortunately, nearly every one of these reasons for why the movie should have been good ends up falling flat. The potential was there, but the execution just doesn’t deliver on any of it. The movie starts out great, opening right away with a woman being held down while inside of a carriage that gets pulled by horses at rapid speeds. The state of emergency is in the air, and pretty quickly we are with the girl as she sits in a room discussing her problem with the doctor.

This woman is Sabina, played by Kiera Knightly in what is most definitely the best performance she has ever given. She plays a crazy person to perfection, getting down the mouth and jaw movements as well as the hand gestures, speaking patterns, and everything else. This is a woman who can’t get through a single thought without having to confront about ten demons first.

The doctor she is speaking with is Carl Jung, played by Michael Fasbender. He tries out the practice of sitting behind her in a chair as she talks, so that she cannot see him and has no distractions. Soon the two of them have figured out that her problems stem from the ways that her father beat her when she was a child and that she got a sort of sexual pleasure out of the experience to the point where she would look forward to it.

All of this has been pretty interesting, and we still haven’t meant Freud yet. It is at about the time that we meet him that the movie starts to head downhill. We get some pretty dull conversations about practice. This movie is way too heavy on dialogue and it starts to show right about here. Soon Jung is back at his home and his patient, Sabina, has been cured. He runs into her in town, sometime later, and she tells him that if he is ever interested, she will make herself available to his needs.

It’s at this same time that Jung is working with another patient, Otto Gross (Vincent Cassel). Gross is even more sexual than Freud, because unlike the doctor who comes up with theories about sex, gross actually practices it. He is basically a sex addict and encourages Jung to find his primal instincts and accept Sabina’s offer. Jung listens to him and goes to the town where he knows Sabina is staying. He shows up at her door and the two of them begin an affair.

This is the second portion of the movie, and it’s somewhat interesting, although not nearly as compelling as the first part. The most interesting thing about this storyline comes after Jung has cut Sabina off and she threatens to tell the world about their affair. She begins by writing a letter to Freud, telling of how her doctor, Carl Jung, had an affair with one of his patients. Freud writes back that he does not believe her claims and that since Jung is a friend of his, he would appreciate her dropping the matter and leaving it alone.

That’s when Sabina shows up at Jung’s doorstep and tries to convince him to tell Freud the truth. Starting here, the movie really goes downhill faster than anything that has happened before. Evidently this whole situation is what causes the rift between Freud and Jung, and yet we never actually get to see any of it. Instead, all we is a scene of Jung writing Freud a letter telling the doctor that he treats his friends as if they were patients, trying to dissect them.

There are many problems with A Dangerous Method. It is the third collaboration between director Cronenberg and Viggo Mortensen, and perhaps this movie marks the end of an era. It’s been close to a decade since the two of them started working together with A History Of Violence, a great and twisty movie. Cronenberg has always been a dark director who goes deep in the disturbing with movies like Naked Lunch, The Fly, Videodrome, and The Brood. His better movies are the ones that are more relatable on some basic level, like Existenz. When he started working with Mortensen, he started making movies that were still dark, but certainly more relatable than the movies of his past. First was a history of violence, and then came Eastern Promises. A Dangerous Method doesn’t even come close to being as good as either one of those films.

A major problem with the movie is that we don’t get enough about the practice. We never see these two men trying different experiments and seeing what happens. Carl Jung is the man who came up with the theory about different archetypes, yet none of that is explored here. Another reason for the movie being so dull is that is really doesn’t show much about the conflict between these two men. The letter-writing scene is one of the few that actually shows anything about how their relationship has deteriorated. A few scenes of them being rude to each other at parties might have sufficed, but we really aren’t given anything here, and instead, the movie rests solely on dull dialogue and lengthy conversations. There was a lot of potential here, but the movie still ended up pretty lifeless.