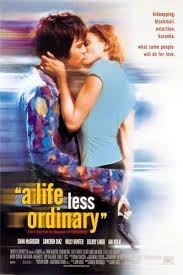 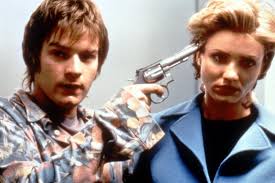 An interesting premise makes this movie somewhat worthwhile comedic fare, that unfortunately tires out it’s welcome well before the end.

A Life less ordinary is the Danny Boyle / john Hodge follow-up film to Trainspotting. Now considering how off the charts funny and artistic Trainspotting is, it shouldn’t be a surprise to say that this movie doesn’t even come close. In fact, comparing the two almost seems unfair, just like comparing any filmmaker’s work to the very best film he ever made. But it is worth noting that the two movies have the same writer, director, and star (Ewan McGregor) and were made only a year apart. Other than that, there are no real similarities.

The plot, for one is totally different and completely out there. Instead of grounding the movie in a gritty reality, the way Trainspotting did, a life less ordinary is set in a world of romance and supernatural. I guess what you could call it when angles come down from heaven to alter the fate of the people living on earth. The movie opens in heaven, which is like an all white office building where the people there dress in only white colors as well. The angel Gabriel (Dan Hedaya) is sending down to other angels to go to earth and make sure that two specific young people fall in love.

Those young people are Robert (McGregor) and Celine (Cameron Diaz). For Diaz, this was her breakout year; having been in the hit film my best friend’s wedding that summer. This movie came out in the fall, and she was already a name people were starting to remember. The following year would bring us her biggest hit, there’s Something About Mary, and from there, it was no turning back. Here, in this romantic comedy of sorts, Diaz’s character, Celine, is the spoiled daughter to a wealthy jerk who could care less about her or anything else besides money.

We meet Robert first, as he cleans the floors of an office building and in his free time tries to convince his colleagues that he is writing a great mystery novel. They don’t really buy it and kind of laugh at him. Then we meet Celine as she sits by her pool, lounging away, and for entertainment, stands up with a gun and shoots an apple off the head of her butler. When her dentist fiancé (Stanley Tucci) approaches her and wants her attention about something, Celine makes him put the apple on his head for some target practice first. This time, when she shoots at the apple, things don’t really go as well.

Meanwhile, back at the office, Robert is being fired. Robots are replacing him and all of his coworkers. Tiny ones that are only as tall as a person’s knees. Celine goes to visit her father, Ian Holm, right as Robert busts in on the father to demand his job back. Robert’s got a gun and when the security shows up to tackle him, the gun goes flying over to Celine. She sees an opportunity to maybe watch something a little bit fun, and so she kicks the gun back over to Robert, and next thing you know he’s taking her hostage and they’re running away from the building.

There is some good humor in this first part of the story and that’s important. The talk of Robert’s trashy novel and how his coworkers have told the woman who is firing him about it and how it’s not even very good. The moment where Robert picks up one of those small robots, off the floor, and tries to throw it through a window, only to watch it bounce off the window and get back to work. And even the moment where Robert was holding up the guards, but as soon as one of them punches him, all hell breaks loose. All of it was funny. Unfortunately, this is the funniest act of the entire movie. There is other humor interspersed throughout, but never as consistent as it is here.

The rest of the movie is about the two of them, on the run, living together in a cabin, and trying to get Holm to pay up some ransom money. Robert doesn’t know the first thing about kidnapping, but lucky for him, Celine does. And she’s on his side, hoping to get money from her father as well. The two of them plot and plan together and eventually go to a pay phone to make the call. That leads to another funny scene, with a beck song playing over a sort of montage of all the attempts by Robert to call Celine’s father and act like a tough guy kidnapper. Most of them go pretty poorly, and Celine is right there to slam down the receiver every time Robert fails.

The two angels (played by Delroy Lindo and holly hunter) come after them, representing themselves as bounty hunters hired by Holm to get Celine back and kill Robert. The angels have other ideas. They want to put Robert and Celine into jeopardy so that the two of them end up saving each other and falling in love even more. All of that works out pretty well, and gives us a few fun action scenes involving shootings and car chases. But when the couple stops at a bank to hold the place up, they find themselves in a fight afterwards, so big that it causes them to go their separate ways.

Every romantic comedy has an act towards the end where the couple splits up and has to reevaluate things. It’s one final challenge that they have to get over to give us a climax. Here, the angels help out, writing poetry. And it’s enough to bring Celine over to a diner to come and see Robert, but not enough to work. Only her getting into jeopardy once again sends him after her and makes them start to get over their fight. It all starts to seem too repetitive at this point.

A major problem with the movie is that it is too rooted in action and fast moving situations, for us to take any of it seriously. For us to care about the plot, there have to be some slower moments of actual intelligent conversation here and there. In this movie, those sort of moments don’t exist. The movie was made on a quick list of ideas that when thrown together in a pot, don’t quite stick. There’s no glue holding them together. Yes, the ideas are witty and the humor is overall pretty good, but there’s definitely something missing. That becomes more and more evident as the movie goes on and starts to become kind of tiresome. The characters are a little too one dimensional (especially Celine), and that makes it hard to really care about them. The overall tone of the movie is silly fun, and this is kind of like a dopey b movie infused with some clever ideas. On those grounds it works. There’s also a remarkable cast on hand that helps propel this thing along, even if it does get bogged down here and there sometimes.