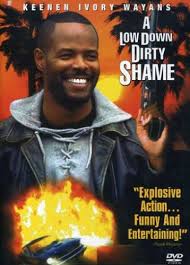 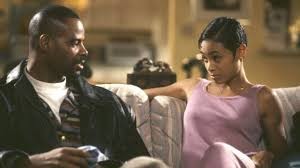 A pretty dopey private eye movie infused with Keenan Ivory Wayans’ humor that doesn’t even bother to attempt being clever or unique.

A Low Down Dirty Shame is a detective movie where the lead is a private investigator out on his own, working only with a trash talking sidekick / assistant. Keenan Ivory Wayans plays the lead, and he drops one-liners on a regular basis, but none of them is really all that funny. His assistant is Peaches, played by Jada Pinkett Smith in a role that lets her run wild with the sassiness. The humor in this movie doesn’t really work. Neither does the action, which is pretty routine. The plot, which isn’t exactly fresh or original, still manages to be the best thing about the film. It involves a pretty big setup that Shame, our hero, never sees coming. The movie was meant to be a sort of shaft like him about a tough talking wise guy who could do it all. If they left some of the corny jokes at home and focused more on the story and action, it would have been a better film.

A Low Down Dirty Shame is exactly what you would expect. It’s a comedy disguised as a cop movie that can’t seem to find the right balance of humor and serious storytelling. On the cop side, this movie is completely routine. Shame (meant to sound similar to shaft, and at the same time use the disco song, “Shame,”) is a tough talking smooth detective who works for himself, has a female sidekick, and isn’t afraid to get his hands dirty. He is played by Keenan Ivory Wayans at a time when Wayans’ TV show in living color was a monster success, and when this actor could do anything he wanted. Unfortunately nothing he did really turned out that great.

When we first meet Shame, his assistant, Peaches (Jada Pinkett Smith) is posing as a housekeeping maid at a hotel, going room-to-room and pretending to clean up. She doesn’t actually clean up a single room, and instead keeps opening rooms she isn’t supposed to, where people are in bed wit each other. The point of this is for comedy, and it’s pretty dumb. She eventually gets to the room where the bad guys are, and Shame pops out of the housekeeping cart and gets into a shootout with the guys in the room. By the end of the scene, he is jumping out of the window and crashing through the sunroof of the car below him. Considering that the end of the movie will also have him doing a sort of bungee jump, and that the move is a direct rip off of Bruce Willis jumping off the roof a building at the end of die hard, a low down dirty Shame can’t even get the action right.

The story involves an old friend of Shame’s, Rothmiller (Charles S. Dutton), coming to visit Shame with a case. The case involves a guy who used to be Shame’s enemy and who Shame thought was dead. This guy is Mendoza, (played by Andrew Divoff, the main villain from toy soldiers.) Shame has no idea where Mendoza is or what he is up to, but he does have one clue. The girl. There was a girl who Mendoza was in a relationship with until she turned on him and joined the witness protection. Now she’s in danger, and if Shame can find her, then maybe he can help her and also find Mendoza.

The storyline is actually one of the only things that I like about the movie. Not that it’s anything special, but Shame is clearly being setup here, and he actually ends up finding the girl for the bad guys. I like the way he isn’t able to put all this together and realize that if the girl is in the witness protection program, then maybe she doesn’t need to be found and is doing okay, under protective custody. Instead, Shame goes and finds her and delivers her right to the bad guys without even realizing it.

While the story is finding, the humor is dumber than it is funny. For one thing, it is completely geared toward black audiences, making fun of people like Gary Coleman, Rodney King, and Arsenio Hall. These jokes might have resonated back when the movie came out, in 1994, but two decades later, most of them fall pretty flat. Clearly this is not a film that stands the test of time. Even peaches are a clichéd character, with her trash talking sassy mouth.

Peaches also are obsessed by soap operas, which actually leads to the funniest moment in the movie. She is always on the phone with her girlfriends talking about what is happening in the soap opera she is watching, and getting all worked up about it. In addition, one day she runs into one of the soap opera stars on the street. Photographers crowd around the guy as if he is a huge celebrity, and peaches push her way through the crowd. When she gets up to him, she punches in the face and sends him flying over the side of a rail, and it is all because of something his character did on the soap opera.

While that one bit might have been funny, most of the humor here is not. That includes Shame waking up in bed with a gay man, and Peaches not telling him who her roommate was. It also includes Shame doing gay voices throughout the movie and at one point getting that roommate’s lover to think that Shame is having an affair with the roommate. Another dopey scene has one of the Hispanic bad guys being kidnapped by Shame and then let loose in a crowd of skinhead white racists. Shame drives away laughing, leaving this goon behind.

While the initial premise to the movie does work, even though you can see the double cross coming from a mile away, the plot that follows is not nearly as interesting. Shame does not put any great clues together the way he should. Instead, he tracks down the woman he is after based on the special perfume she wears that he remembers because he used to date her. She just happens to wear this special perfume that you can only get at one place, and Shame just happens to remember exactly what it’s called and where to get it.

Shame goes around insulting everyone in his path, shooting off one-liners as if he was the black James bond. The humor isn’t very good in the movie, but luckily it never breaks out into complete spoof, the way that Keenan Ivory Wayans’ Scary Movie films did. This one tries to maintain a serious storyline for as long as it can, and it’s a good thing, because if it was relying on comedy alone, the film would have been a lot worse.

The big problem with the movie is that nothing in it is fresh, new, or creative. I suppose this is meant to be a sort of a cool, black, private investigator who is also into the one liner comedy. It’s meant to be the black china town only with a comedic edge. Only it doesn’t even come close. The humor makes that whole thing feel somewhat silly, as if it expects us to laugh at stupid jokes. The storyline is also really nothing very original. By the end of the movie, we get the standard chases through a mall that we would come to expect from this genre. This movie is not very worthwhile at all.