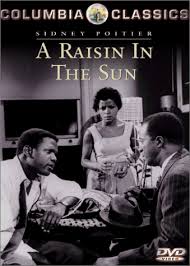 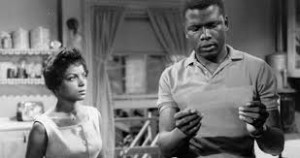 A fantastic movie about human drama and family struggles in a tiny apartment where a large some of money is on its way.

A very powerful movie about family struggle, this film takes us right into the apartment where five family members live and keeps us there, in those tight quarters, for most of the first half. Characters rotate in and out of a small room, as if we are watching a play, and the conflict builds with every new conversation. His is the weekend when the grandmother of the family is receiving a large insurance check, and every character has a different idea about what the money should be used for. This puts them all at odds with each other, trying to convince the other ones to see their point. The movie is completely character driven with some remarkable performances and ideas. It gets better in the second half, as the characters branch out a little more and get away from the apratment, but it is pretty intense the whole way through.

A Raisin in the sun is a very gripping film. It’s a movie about a black family living in a very small apartment, on the weekend when their lives are all about to change. That’s because this is the weekend that the grandmother of the family is about to receive a large check for the insurance money of her husband’s death. That check can do wonders for the family, and everyone in it has a different idea about what to use it for. This puts each character at odds with each other, competing for the money, and trying to discourage the others from going after it.

The movie begins on Friday morning, with the alarm clock going off and Ruth, the mother, getting up out of bed. She leaves her husband, Walter (Sidney Poitier), to sleep a little longer and then goes into the next room to wake her son. That boy, Travis, is asleep on the couch, and Ruth hustles him up and into the bathroom. Then she goes and wakes Walter, having to yell just to get him up. When he finally does get himself out of bed, Walter learns that Travis is using the bathroom and that he can’t get in just yet, and he turns it on Ruth, getting angry at her for waking him when he can’t get in the bathroom yet.

It isn’t long before we meet the two other characters, who are living in the house. There is Beneatha, Walter’s younger sister, and then mama, the grandmother of the house. She’s a big, tough woman who has been through a lot, and has had to deal with the loss of her husband, in order to get this money. Beneatha is the young, free spirited character, who sees the world as full of possibilities.

Walter is less optimistic. He’s stuck working as a chauffeur for a rich, white man, in a job that makes him sick. He doesn’t feel like a man at all, doing this job, and certainly doesn’t bring home enough money to support his family. For that reason, his son sleeps in the living room and his sister and mother share a bed. Walter feels like he has missed opportunities in the past to get rich quick, like a dry cleaning business that one of his friends started. He feels that this money, that is coming to mama, is his chance, and that he can use it to open up a liquor store with his friends and be self-employed.

Beneatha wants to become a doctor, and while she says she won’t be asking mama for the money to put her through medical school, she knows that it’s what her mother will do with it. Walter has a problem with this. he wants the money for his business and tells Beneatha that she’s got no right going to medical school and using their money. He tells her that women her age either don’t work and just marry, or become nurses. They don’t become doctors. Beneatha doesn’t care what other women do.

during the course of that first day, we see walter have conflict with the other members of his family as he tries to persuade both his wife, ruth, and beneatha, to help get his mother to give him the money. ruth doesn’t want to hear about walter’s ideas and beneatha thinks he is being selfish. walter ends up storming out, and after beneatha leaves, it’s just ruth and mama. this is mama’s first day of retirement, and she’s enjoying staying at home. that is until ruth passes out and everyone learns that she is pregnant.

the first half of the movie pretty much all stays in the apartment. there is a scene or two at the bar, with walter and his buddies drinking together, and a quick scene of him driving the car, but otherwise, this first half is all filmed in one tight space. and in the course of that half, there are all kinds of rousing speeches and shouting matches, including a moment where beneatha denounces god and her mother becomes furious with her about it.

as the movie progresses, we get to meet two different suitors of beneatha, each one very different from the other. there’s george, the well off man from an upper class family, who beneatha really has no interest in. she only dates him because it pleases her mama. then there’s asagi, the intellectual from nigeria who makes beneatha feel like she is getting back to her roots, just by talking to him. this is the man who beneatha is fascinated by.

in the second half of the movie, things really change. suddenly the focus becomes not on what the money could be spent on, but on how the money is actually spent. both walter and his mother make investments with the money, and both investments end up causing conflicts. when mama buys a house for the family, everything seems to her like it is right where it should be. then a man named linder shows up, wanting to talk the family out of moving there, and they realize that things won’t be running as smoothly as they hoped.

despite its limited locations, this movie has a lot going on. both walter and beneatha each have two friends and each friend represents something very different. walter and his mother both find themselves betrayed in what they thought were sure-fire promises. and there are also great scenes where the mother tries to analyze what is going on with her children, telling them that all they care about is money, and that back when she was their age, she was worried about staying alive and not getting lynched. the music and look of the film are both great, and the acting, by poitier in particular, is top notch. this is a pretty wonderful movie. it might feel a little slow at times in its first half, but the payoff in the secind half is definiley worth it.