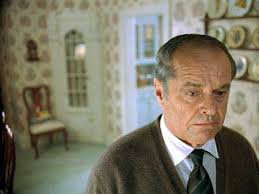 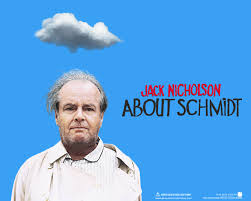 An okay black comedy that is pretty funny in it’s first half. but then slowly runs out of steam and becomes conventional and dull

About Schmidt is like two movies in one. Sometimes, this sort of thing works when the two movies cover two different genres of film. From Dusk Till Dawn, and more recently, At World’s End are good examples of this. In About Schmidt, the genre stays the same. that genre is black comedy. What changes is the tone and perspective of the movie, and as such, the second half is kind of a mess. The first half of the movie works perfectly. We get the story of a guy retiring, who is incredibly bored with everything and everyone around him, including his wife. This is the guy who looks at the world as a bunch of idiots, getting in his way. It’s all very funny. but then in the second half, the character goes on a road trip, and suddenly it is he who becomes the annoying one. The movie would have been much better if it continued along the same path it had started on, with great humor and sharp wit.

About Schmidt is a movie by Alexander Payne, the mastermind behind Election, Sideways, and The Descendants. Payne is a wild man when it comes to black comedy. He has varied his films between strange story lines and conventional plots with a twist. his better movies are the strange ones. Election was incredibly bizarre, as it ended up being a movie about a student council high school election and how one teacher got way too involved. Sideways, Payne’s best film to date, was about a weekend buddy trip to wine country, California. The two main characters and disasters they got themselves into turned out to be a lot of fun.

The Descendants, Payne’s third best movie, combines the conventional (finding out your wife was having an affair), with the creative (sitting as the head of a board of trustees, deciding what to do with a huge piece of land). Unfortunately, About Schmidt is the weakest of the bunch (not counting Payne’s very first film, Citizen Ruth). That’s because Schmidt is a more conventional movie, and as such, it does not have the creative drawing power of those other films. The movie starts out very strong. It begins with Warren Schmidt (Jack Nicholson, unafraid to play an old man here), sitting at his desk, staring at the clock, watching the minute hand reach it’s final seconds before he gets up to leave. It’s his last day on the job that he has been working for his entire life.

This is followed by an honoree dinner to say goodbye to Schmidt for all of his hard work over the years. People get up and make speeches about him, and all Schmidt can do is sit there and smile. He pretends to be happy, but really he’s anything but. At one point he excuses himself from his wife, who sits beside him, and he walks out of the room and over to the bar. He sits down  and orders a drink. Anything to get away from these people and unwind by himself. We can relate to this scene, and to Schmidt’s utter annoyance with everyone around him and need to get away from it all, even if just for a few moments.

Schmidt now finds himself being very bored at home. He starts sponsoring a young African boy, by mail correspondence, and we hear his voice-over narration as he writes letters to the boy. The child’s name is Indoku, and Shmidt begins his first letter telling a little bit about himself. Quickly this becomes a rant of absolute rage, as he goes off about the problems he has with the man who has taken over his job. Schmidt also gets into the problems he has with his wife and all of her little idiotic things that drive him nuts.

All of this is very funny. It’s funny that he is bothered by these things and is just realizing it now, and it’s especially funny that he’s writing about it to a little boy who can’t even read, let alone understand what Schmidt is going through. Obviously Schmidt is just venting for his own well-being, treating the letter as a sort of diary or journal, but it comes across as very humorous the way he keeps writing it as if he is talking to the boy, constantly dropping Indoku’s name into his voice-over.

One day Schmidt’s wife dies. it happens when he goes to the store and leaves her vacuming the kitchen on her hands and knees. When he comes back home, she’s on the ground, dead. Now his life becomes even more boring than before. He finds himself driving around his old workplace and stopping in just to see if the new guy, who has taken over for him, has any questions.

All of this might sound like it is slow, because it is about a man who is unhappy and bored with his life, but it’s actually a lot of fun. that’s because Schmidt is one of those characters who is both frustrated and unsympathetic to all of the idiots around him. Everything and everyone makes him angry, and his voice-over is filled with funny rants about the things that piss him off.

In the first half of the movie, Schmidt is the cool character, out against the ridiculous and crazy world. But then he goes on a road trip to see his daughter (Hope Davis) who is about to get married, and things start to change. Specifically the scene at the trailer park is where things go from Schmidt being the normal guy to him being the weird guy. When a neighbor knocks on his door and says “ahoy there,” waiting for shmidt to say, “ahoy,” back, he is still the rational guy looking out at the moronic world. But when he is left alone with the man’s wife and ends up thinking he is more than he really is, things take a terrible turn. Suddenly it is Schmidt who is the outcast.

Now he is no longer the character who wants to be away from everyone, creeping over to the bar to drink alone, wanting to be left to himself. Instead, Schmidt is the annoying father calling up his daughter, who is frantically preparing for the wedding, and telling her that he will be arriving a week early. His character has changed completely and unfortunately, so has the movie.

The second half of the movie becomes all about Schmidt staying with his daughter’s new family (including the matriarch of the house, Kathy Bates), and watching as they prepare for the wedding. He doesn’t like the fool she’s about to marry, and that plot line is funny, (it’s the closest thing we get to the first half), but all the rest of the story is not. Especially when we get multiple scenes of women yelling at or being mean to men, and the men just being pushovers, letting the women walk all over them. There’s Kathy Bates doing it to her ex-husband and then Hope Davis doing it to her fiancé. None of this is very funny and it drags the movie down a few pegs. If not for the turns of the second half in the wrong direction, this would have been an excellent film. The premise was never anything great, but still the sharp wit and humor were there in the first half. Once Schmidt leaves his comfort zone and hits the road, however, things start heading downhill, and whatever this movie had going for it, gets left behind.