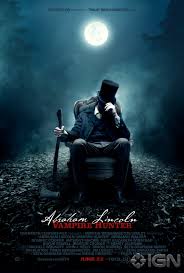 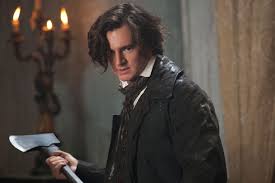 An okay movie with an interesting original concept, and a lot of action, but not the best storyline or execution.

The initial idea is great. Mash up these two genres, so that we don’t just get a political movie, but a vampire action movie as well. The problem is, this movie really isn’t a political movie at all. Instead of going half and half with the two genres, or something even close to that, this is pretty much completely a vampire movie. We don’t get to explore much of the political story, including how Lincoln became president or made some of his big decisions. instead, we get vampire killing. And that would be fine, if only it was done a little better. here, the start up, slow down, slow motion action is just annoying and incredibly unrealistic. On the positive side, whatever explanations they come up with between real events that happened, and how vampires might have been the cause of them, are pretty cool. this movie needed either more political storytelling or better action, or both.

Abraham Lincoln: Vampire hunter is not a very good movie. it’s okay at best. That’s because the story is fine and keeps you watching, but it really doesn’t have anything that creative to offer. Considering the title of this movie, and what you would think it implies, the lack of creativity in story content is especially lousy. I mean, this movie is supposed to mash up a political-historical movie about the president, with killing vampires. and it does those things, only something still feels horribly wrong.

This movie came out in the same year as the Spielberg biopic, Lincoln, and what a difference the two films really are. That movie was serious and dramatic, whereas this one is nothing more than some goofy fun. The story is about a young man who sees his mother killed by a vampire, gets taken under the wing of a man who wants to teach him how to kill vampires, and then becomes a vampire killer.

while all of this is happening, he also starts to get involved with politics. he runs for president by day and kills vampires by night. something like that. only the movie doesn’t really get into the political storyline much. this is basically the exact opposite of that spielberg film, and ninety percent of this movie is about the vampires. i didn’t like how political the spielberg movie was, and i was hoping this vampire film would take about half of that political element and mix it with another half that was the vampire story. instead, we got nearly an entire movie about vampires.

now there were a number of elements that did have to do with lincoln, the man here. mainly, the civil war. the movie didn’t spend much time on lincoln running for president or on lincoln becoming president, or even on his decision to go to war with the south. instead, it focussed primarily on the battlefield action. the north vs. the south, the blue vs. the grey. this was an action movie with the political stuff just serving as an excuse to get to the action scenes.

before any of that civil war and lincoln as president stuff got started, we were with abraham, (Benjamin walker) learning how to kill vampires from Henry sturges (Dominic cooper, from captain america). sturges puts lincoln through training, teaching both his body and find. this is some of the best stuff of the movie, and it should have been longer. what ends up being a quick montage, should have been a few scenes long.

this movie was directed by timur bekmambetov, the guy who made daywatch and nightwatch, and then wanted, as his first mainstream, american movie. all of those movies were pretty good. like wanted, this movie is about training, and about doing things that are actually impossible, by bending the laws of reality. it’s all matrix kind of stuff, really, bending the spoon. in wanted, it was curve the bullet. here, it’s chop down a tree with an axe using only one strike. there’s one moment when we see this, and lincoln slices right through the tree sending the top part of it shooting up into the air. this is cool stuff. we could have used more of it in the movie.

instead, we get lincoln going right after vampires. an axe is his weapon of choice, and so they pour silver onto the blade. i like that the movie is using the idea that you can’t just kill vampires the same way that you kill humans, here, but isn’t silver for werewolves? I know that since werewolves and vampires and zombies are all fake, a movie can really make up any rule it wants (Which is why some zombies walk and in other movies zombies run), but isn’t it common knowledge that vampires have to be killed by stakes through the heart?

i guess this movie really wanted to use an axe, since that was commonly associated with the real abraham lincoln, and so it just put in the silver thing, hoping we wouldn’t question it. a better move would have been to have the handle end of the axe shaped like a stake, so that he could use the axe to chop through things, but when it was time to kill a vampire, could just turn it around and use the stake. the movie doesn’t have problems turning weapons into different things, at one point it shows us that his axe is also a gun, but i guess they just didn’t want to put stakes through vampires hearts here. oh well.

lincoln does face off against a lot of vampires in the movie, and i like how during the course of the film, the villains, or his targets change. first he’s after the vampire who killed his mother, and after he gets that vampire, he suddenly has new enemies to go after. that works much better than if he was pursuing the same enemy for the entire movie. the big problem with the film though, is the way that the action is done. it is all speed-up, slow-down style. now i know that it’s what this director used in wanted too, but here, it’s like he’s abusing the technology taking it way too far. every time a scene goes into slow motion, it feels more fake. we can suddenly see how much computers were used and how little this looks like reality. i know the matrix started this sort of thing, and then movies like 300 carried it forward, but when it gets to the point where it ruins the action, we have a problem. 300 still had amazing choreography and ideas. abraham lincoln: vampire hunter, does not.

the best thing about the movie is the way it tries to come up with explanations for things that really did happen in history, but using vampires. the north fights the south, and vampires join the confederate army fighting for slavery. since vampires can’t be killed by regular bullets, and the northern troops don’t know that, the north ends up badly losing the first battle at gettysburg. that’s how the movie explains why the north lost that battle. there’s also an explanation for why and how lincoln’s young son is killed, and again it involves vampires. i still like the concept of mashing up these two genres, quite a bit, but the thing is, it has to be done right. that means the action still needs to be quality and can’t be taken for granted. and the story has to really combine both genres, and not just pretend like it’s doing that. this movie had a good idea, but some pretty lousy execution.