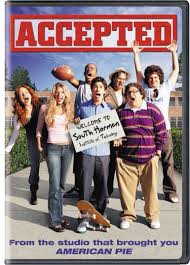 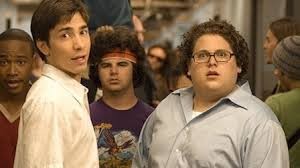 A silly movie about kids who start their own college and try to make it look and sound authentic.

Accepted has an interesting enough initial premise. using the technology of today’s day and age, a couple of high school kid’s fake a college. they create a letter head, type up a mission statement, and somehow convince a bunch of parents to believe that their children have been acCepted to this school that nobody has ever heard of. i understand that the parents are desperate because their kids didn’t get in anywhere else, and so they probably want to believe that the school is real despite the obvious signs that it is not, but here’s another question: why are these kids not getting in anywhere? why has this suddenly become a major conflict where tons of kids are turned away from every college they apply to? The movie could have tried a little harder to explain that, considering the whole point of the storyline was based around that problem.

this is a movie where we are absolutely supposed to suspend our notions about reality. i mean, the whole thing is pretty ridiculous, but if you just go with it than maybe at least the jokes will be funny. That’s the hope anyway. unfortunately, they really aren’t. at best, some of them are okay. mostly it’s just bartleby (the justin long character), acting like a smart ass, saying insultingly smirky things to people, and getting away with it. he makes fun of the assistant principal to the man’s face and all that happens is the assistant principal angrily tells him to stop in an almost crying voice. later on, he insults the frat guy bully by making fun of the kid’s intelligence and i suppose the frat guy isn’t even supposed to realize that he’s being made fun of. the truth is, bartleby would have his ass kicked by the frat guy for making these jokes and then he wouldn’t look so smug. and the assistant principal would probably have him suspended. but in this movie, the character faces no consequences at all.

if you strip the plot down to just the basic idea, it becomes a movie about these high school grads faking an entire university. they find an abandoned insane asylum and turn that into their dorm rooms. i’d like to say they turn it into their lecture halls as well, but they really don’t have lecture halls. the classes seem to all take place outside with students huddled around the professor as they all sit on the lawn. Still they clean the place out themselves and do everything they can to make it look prestigious.

they even hire shoe salesman lewis black to be the dean of their fake school. he takes the job and meets with bartleby’s parents and says some pretty outrageous things. and of course bartleby’s parents are okay with all of it and say that they completely agree with him. it’s like the running joke of the movie that no matter how ridiculous things get, everyone around is okay with it. now black is funny. he’s a natural comedic talent and any opportunity to hear him go off on his crazy rants is a good one. i’m glad this movie got him and he’s probably the best thing about the film.

As far as the plot line goes, the more kids shows up to the school saying that they were admitted there and are ready to set up in dorm rooms, the more this fake college has to be built even bigger. bartleby and his friends work hard to make everything look and seem legitimate, but it still doesn’t quite work out that way. for example, instead of online registration for classes, they have a giant bulletin board where kids just make up their own class titles and basically write down what they want to study. this becomes an opportunity for the movie to come up with some pretty funny class name ideas, such as “the rise and fall of chevy chase.” but in thinking about how this bulletin board could really be used to determine classes, like everything else in the movie, the idea quickly just falls apart.

like any eighties movie or frat guy movie, there is an evil frat next door that wants to do away with bartleby’s university. the school is where the rich jocks go and one of bartleby’s friends, played by jonah hill, has been accepted there. he is pledging the local frat and the guys at the frat make him dress up and serve them and do ridiculously embarrassing things. this is hill before he was funny. he hadn’t quite found his rhythm yet. in fact, he really didn’t find it until he met judd apatow and got to be in the 40 year old virgin, knocked up, and then his breakout role in superbad.

Here, in accepted, he’s just playing a cliched fat nerd. there’s really nothing to his character at all, which is a waste of a talented comedic actor. but then again, this movie is rated pg-13 and hill needs to be in a movie that is rated r. he does his best work when he is free to curse and talk however he pleases. none of his great movies (including forgetting sarah marshall and get him to the greek) would have been anything if they were pg-13.

Like all movies where there is a secret, you can bet that by the end of this movie that secret will come out. the fact that the college is all a fake will be discovered. it has to be for there to be any real tension or conflict in the film. it’s a shame that the movie couldn’t think of anything else to do for conflict. with all the partying going on and kids riding motorcycles and jet skis off of things, i would have thought someone would have gotten hurt. and that could be a cause for conflict, since the university has no health insurance.

once the secret is out of the bag, the big issue becomes whether or not this university should be allowed to stay opened. are you kidding me? how can that even be a question. these kids lied to adults and basically stole their money. the kids should be sent away for fraud. instead a judge is actually considering letting them keep the university. and how can this place be kept with no real rules or laws? There is no campus security, for example. it’s a totally ridiculous climax.

accepted does have a likable premise, but unfortunately that’s about all it has. Neither justin long nor jonah hill is funny at all here and the movie has more holes in it than a pile of swiss cheese. the storyline is ridiculous and most of the jokes are more lame than humorous. getting lewis black to be the dean is the one move that the movie gets right. other than that, it’s all just pretty dumb. it’s not easy to make a good, young person movie with a pg-13 rating, but it can be done. just look at bring it on. the trick is to still include plenty of sexual jokes despite the lack of cursing. accepted doesn’t seem to know that and instead it just makes corny jokes hoping that they will pass. but in today’s day and age where movies like superbad and the hangover and bridesmaids are everywhere you look, there is no more room for lousy comedies like this.