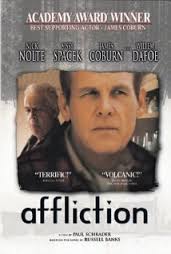 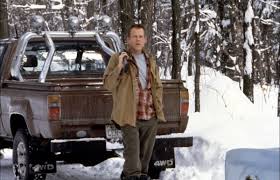 A pretty intense quiet town mystery with plenty of dramatic undertones and subplots.

This is a very cool movie with tremendous ambition. it has all kinds of great subplots about a man whose life is falling apart with every character and relationship he has. that might sound like it is all about him and his family, and dramatic fare, but the movie reserves these storylines for the background. it’s primary plot is about a possible murder and conspiracy that nobody seems to notice except for wade whitehouse (nick nolte). the conspiracy plot line is fantastic, with all kinds of possible motives and suspicions getting tossed into the mix. and wade’s pursual of the truth makes him the last noble guy around. of course he might also be crazy. it’s a hell of a film that is loaded with surprises and different angles for looking at what would have seemed like it could have been a routine story. instead, this movie turns out to be incredibly creative and very, very dark.

Afflction is a dam good movie. It’s the story of a man whose life is falling apart, and not only can he do nothing about it, but he also refuses to accept it. This is a guy who doesn’t pick his battles, but instead takes on every one of them in sight. And that works well for a movie, because it gives us multiple storylines to follow, one more interesting than the next.

The movie is about Wade Whitehouse (Nick Nolte), who is basically like the sheriff of a quiet, snowy town. Only he doesn’t really have any legal authority. A businessman who owns a company in town puts him in charge of town security. Wade is the kind of guy who everyone knows and who everyone has known for decades. They knew him when he was just a kid and they knew his family, which includes his abusive father (James Coburn.)

At the start of the movie we hear Willem Dafoe’s voice over telling us that this is the story about a man who was never seen again, after the events that he is about to tell us. The voice over isn’t very long, but it gets us pretty interested right away. We meet Wade and his daughter as they are driving to a Halloween party at the local school, which she is not too thrilled about. She wants to go trick or treating. He’s not interested. When they get to the school, she wants to go home, and sneaks away to call her mother. The mother then comes to pick her up.

It’s a pretty ugly opening scene that shows right away how stubborn and immature this guy is. His young daughter, in many ways, acts more mature than he does. She is the one who is willing to sit in a chair in a quiet room, all by herself, if it means that he will leave her alone. He, meanwhile, leaves his daughter at the school, and goes out for a drive with some buddies.

Considering this is the opening scene of the movie, which shows how terrible a parent he is, it is pretty incredible to think that one of the subplots of this movie will be Wade deciding to fight the girl’s mother for custody of his daughter. He couldn’t even take care of her for one night and now he wants even more responsibility with her. Wade hires a lawyer and gets serious about pursuing this, and it’s so ridiculous of him that is almost like a bad joke.

But that is just a small subplot of the movie.

The main storyline is of a conspiracy that Wade thinks he has come across. A very wealthy older man is taken out hunting by Jack Hewitt (The Wire’s Jim True Frost), one day. While on this trip in the woods, Hewitt claims that the older man lost his balance, fell down the side of a hill, dropped his rifle, and that the rifle went off, firing and killing him. That’s the story Hewitt tells, only Wade has other ideas.

He knows a few things about the older man who was killed. He knows that this man was going to testify against the mob. He also knows that the man was very wealthy. And finally, he knows that there was a deal that this man’s son in law was trying to make, and the old man wouldn’t agree to it. He was the only reason why the deal wasn’t happening, and now that he’s dead, the son in law can go through with the deal.

So Wade sees all kinds of conspiracies and possibilities for what might have happened. And none of them are that the old man fell and dropped his gun and shot himself. Instead, he suspects the mob and Hewitt and the son in law. He even suspects his boss, the guy who hired him to be the local security, claiming that his boss and the son in law are in on it together. Wade convinces his brother, Rolfe, about this conspiracy, and for a little while Rolfe believes him, before telling Wade that maybe the theories aren’t true and that things did happen the way Hewitt says.

As if the murder conspiracy situation, and the subplot about Wade and his daughter weren’t enough, there are two other storylines going on here. The first is with Wade and Margie, the woman who he is seeing. She is played by Sissy Spacek, in one of those powerful roles that she does so well with. Spacek hasn’t been in many memorable movies over the past two decades, but between her performances here and also in the movie In the Bedroom, she shows that she’s still got it.

And then there’s the subplot about Wade’s father, the abusive drunk. We get to see flashbacks to how the father treated the boys and their mother while growing up, and we get to see that the father is still the same way today. Coburn won an Oscar for his performance in this movie, and he really is pretty great. He’s mean and scary, and a lot of the movie is about how maybe Wade isn’t that far off from the way that his father was. I love that this movie might feel a little clichéd at times, with it’s conspiracy plot, but ends up steering far off the usual path. Nothing works out neatly or the way you would expect, and that’s a great quality for a film to have. The movie is exciting and intense at all the right times and it really builds up in tension. Aside from that, it is extremely dark and unafraid to do things its own way. It is a pretty gripping film.