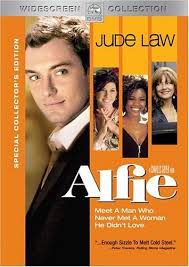 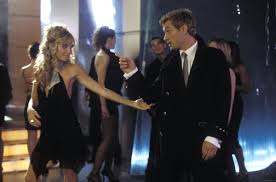 A pretty interesting drama about a playboy who thinks he has everything going for him until he realizes just how wrong he was.

Alfie might look like a comedy, but it’s not. Sure, it has a light-hearted tone in it’s first half, and the premise seems pretty easy going, but the longer this movie goes on, the more you realize there’s something much deeper at stake here. For one thing, the hero is not such a good guy. He’s not terrible or a monster or anything, but he sleeps with women as if it’s his birthright, no matter who the woman is or what her situation may be.

At the start of the movie, Alfie is riding around the streets of New York on his moped, talking to the camera. This is one of those movies where the main character seems to have total control of the camera, in order to show us whatever he wants, (like Goodfellas), and so the camera goes to freeze frame at certain moments just to help make a point and make an image last for a little longer.

Alfie drives a limo around town for a living, working for the same Asian boss as his best friend, Marlon (Omar Epps.) he and Marlon swap stories, including how Marlon screwed up with the girl he is in love with, Lonette, (Nia Long.) apparently Lonette wanted to be in a serious relationship and Marlon didn’t. He wanted to have his cake and eat it too, and not be restricted to seeing only one person. So Lonette moved on, and left Marlon to himself, and now he wants her back. Now he’s willing to do the whole relationship thing, only it just might be too late.

While Marlon has got his problems with Lonette, Alfie has got girlfriend problems of his own. He’s also got a girlfriend, Julie, played by Marissa Tomei. And one night, towards the start of the film, Alfie sleeps with a woman in his limo (30 Rock’s Jane Krakowiak.) then he leaves her to go see Julie. He treats Julie’s place like a hotel, popping in just to have a place to crash for the night. He even tells us, in voice over, that he has two options…to either go back to his small place or to stay on this part of town and crash at Julie’s. And so he picks Julie’s.

There’s only one problem. The limo woman gave him her red panties and tucked them into his pocket. If Julie finds those, Alfie is going to be screwed. We see it coming that she’s going to reach into his pocket at some point, and he’s going to have forgotten that they were in there. But the movie stays a step ahead of us. He slides them out of his pocket when Julie is not around and puts them into her garbage, moving some things aside to cover it up. I’m glad he got rid of them, but why put them in her garbage. This is when he should be making an excuse to get out of the apartment, so that he can throw them out in public garbage somewhere.

As can be predicted, Julie catches the panties and kicks him out and that’s the end of his relationship with her. Alfie doesn’t seem to upset. He tells her that he’s always okay, and that she has nothing to worry about, and then he goes on.

Alfie goes to the bar where Lonette works and sits down for drinks with her. They talk about Marlon and how badly he wants Lonette back, but pretty soon they are no longer talking about Alfie’s best friend at all. Instead, they are playing pool together in undershirts, and focusing on themselves. And they end up sleeping together. Alfie sleeps with his best friend’s girl.

This drives her to get back together with Marlon, who can’t stop thanking Alfie enough, thinking that his buddy said something to Lonette that night to make her take Marlon back. Marlon doesn’t know the truth about what happened, of course. We all know how this sort of story ends, with the secret eventually coming out, and Marlon finding out what his best friend did. But this movie takes it up a notch involving an unpredictable situation and the couple moving upstate. When Alfie goes to visit them, much later on in the film, there are some fireworks that nobody saw coming.

There are other women in the film too. Alfie has a short-lived relationship with Sienna Miller, looking as hot as ever, which turns out to be more than he bargained for. And then he also starts messing around with older lady Susan Sarandon who is playing the same game as him, only at a much higher level. Each situation has its ups and downs.

The movie is enjoyable because of the ways it tugs at your feelings and often puts you on the edge of your seat. Alfie makes unannounced visits to people and it’s always a shocker what he ends up finding. It happens when he drives upstate, and it happens again when he thinks he’s ready to settle down with Sarandon. There haven’t been too many movies about playboys and their many women, and so this film is actually something kind of unique. Far better than watching a movie about one single relationship and it’s ups and downs. Here, Alfie lives a lifetime over the course of two hours. There was an original Michael Caine Alfie movie that this film is a remake of, and I bet that movie is pretty good too. I’m sure the Jude law version captured the main ideas and beats and did a pretty nice job at it. The movie works better than one might expect.