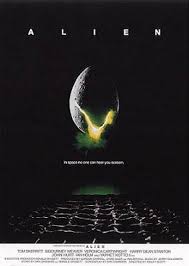 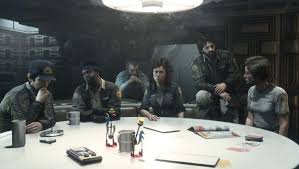 Very artistic and well-made, but often a little slow and too detail-oriented.

Alien and its sequel, Aliens are two of the best sci-fi creature movies of all time. They are also as different as can be. Aliens is widely known as the better movie, the rare sequel that is an improvement on the original, just like Terminator 2 and the Godfather Part 2. And like the second Terminator movie, the reasons why Aliens is better are very similar. Both alien and terminator setup the world. The movies setup the future atmosphere and the storyline and fill them with elaborate details. The sequels, Terminator 2 and Aliens (both directed by James Cameron, who also made the first terminator movie), take the premises that the first movies had created and fill them with massive action and effects, while again offering up a smart story. The sequels take whatever was a little slow about the first movies and pump these parts up so that the entire film ends up feeling like a jolt of energy.

So Aliens is better because it is more alive and ferocious, but alien, the original movie that started it all, is still pretty cool and creative. The movie opens with a ship orbiting outer space and landing on a strange planet. The crew finds another ship there, and goes out to explore. One of the crewmembers, Kane (John Hurt), comes across an alien egg. He looks closely at it. The details of this egg are very cool. You can actually see something moving inside of it, although we are not quite sure what that something is.

Those are the kind of details that the second movie doesn’t have. By the time the second movie, aliens, rolls around, the mentality is that we’ve already been exposed to this world and are familiar with all the details. So instead, that movie gets right into the action. But here, in alien, storyline is of key importance. And so when a small alien does pop out of the egg and attach itself to Kane’s helmet, we get nice long scenes of the characters standing around discussing what to do about the situation.

There’s an argument over whether or not to even bring Kane back onto the ship, with Sigourney weaver’s character, Ripley, saying absolutely not. They don’t know what the thing is, and if they let it on board then maybe they will be putting all of their lives in danger. The other crewmembers don’t agree, including the captain of the mission, Dallas, played by tom serrate. He and the others think that their number one priority right now has to be helping Kane, and they are not about to leave him outside of the ship, just because of what could possibly end up being a danger. Of course they do have a point, which is that if it was any one of them outside that ship in Kane’s situation, then they would want their crew to take care of them and to try to help them. But of course we know that Ripley will be the one who was right.

The characters try all different tools and techniques for prying the alien off of Kane’s head. When they poke and prod it, the tail just wraps around his neck even tighter. When they cut it and pierce it’s skin, the alien creature drips acid. It has acid for blood! The acid goes through the floor and the characters follow the leak down to see where it came out. They even stick a pencil inside the hole it made to find the end of the pencil smoking when they pull it out. All of these details are not in the sequel. Aliens don’t have time for this sort of thing. But here, in the original film, they are nice touches.

The big moment that changes everything comes after the alien has disappeared and Kane seems to have recovered nicely. He’s at dinner with the whole crew sitting around him, enjoying their meals. They’re joking around and eating and it appears that Ripley was wrong and that the crew was right to try to save their comrade. And that’s when the alien pops out of Kane. It is an incredible moment, mainly because of how unexpected it is. I can just imagine when audiences saw this on the screen for the first time. It must have been such a visceral shock!

The rest of the movie deals with the characters trying to find the alien that is on board their ship, and getting picked apart by it, one by one. The alien sheds its skin and they find the skin, and not long after that the alien finds them. It’s clever how most of the time it finds them alone, and takes them on one-on-one. And in many cases it’s the characters going off to look for him, putting themselves into harms way. In the case of Dallas, he even has a tracking system and characters using the tracking system to tell him where the alien is, and things still don’t work out so well for him.

There’s also another major surprise that comes in the second half of the movie. It’s the same kind of surprise about a character, and intentions, that is repeated in the second alien movie, only here it is felt even more because it involves more than just an alternative and secretive plan. This time it involves a character that not only is hiding what he plans, but is also hiding who he is. The moment hits with wonderful suspense and shocking revelations.

By the end of the movie, we have a film about a crew in outer space getting attacked by an alien, and killed off by it one at a time. It’s not that far off from serial killer horror movies, especially those that take place in a single location such as a mansion (like clue.) but this movie combines that premise with sci-fi, the future, distant planets, space ships, and aliens. It’s a wonderful formula.

Alien is a great movie. It has amazing details and real shocking moments. It has a cool plot and neat creatures. There are two theories behind monster movies and both alien and aliens use different ones. The first theory is that a movie should take it’s time building up to the monster, showing small moments at a time, and slowly revealing what the monster looks like and is all about. I agree with that theory. The less they show, the scarier it is. I believe that theory goes all the way back to Hitchcock (although of course he never made monster movies), but he used to say that what we don’t see and have to imagine for ourselves is a lot scarier than what we do see and what they show us. Aliens goes with a bit of a different theory. It uses the same theory as the host, which is to show us everything and have fun with it. I might prefer aliens just because it moves a little faster, but I generally agree with the theory that alien employs even more. Both movies are great and uniquely different, which is pretty cool to say about a genre that often just repeats itself. Especially with sequels. Alien might move a little slow at times but it is a fantastic sci-fi movie with cool details, an interesting story, and some wonderful effects and shocking moments.