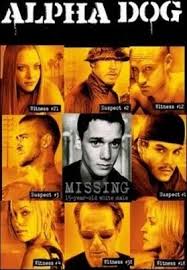 An equal parts scary and cool trip into the underworld of the drug and crime fueled youth of upper class los angeles.

Alpha dog is a pretty cool movie that gets dark as hell in the later portions of the film. The movie does play fair and  lead us up to that along the way, going step by step. This is the movie about Jessie James Hollywood (called Johnny Truelove here), and how he kidnapped the kid brother of one of his enemies. for most of the movie It’s Truelove and his friends trying to figure out what to do with the kid. That boy, named Zack, is played by Anton Yelchin, who plays it just right, making Zack the nicest, most innocent character in the world. He’s also a little too naive, and misses a number of opportunities that are offered to him to go home. The other cast members are also terrific here. Ben Foster hits it out of the park as his crazy brother. Justin Timberlake plays the guy who gets closest to Zack during this whole experience, and you can actually feel for his character. And even Johnny Truelove, (played by Emile Hirsch) manages to convince us that he really is a guy who others would want to follow. Truelove is the alpha dog, and the film is about an upsetting experience that gets worse and worse as it goes on.

This is a pretty powerful movie. Alpha Dog is scary and intense, and that’s in large part because of knowing the true story of Jesse James Hollywood, and how everything around him ended up. This is all based on the true story of the kidnapping and killing of a kid, and here, the Jesse James character’s name is Johnny Truelove. All other character’s names are changed as well, but the story is pretty much the same. The filmmakers even had access to the prosecutions files from the real case that was being charged against James. And this is his story.

It’s the story of a bunch of twenty-somethings acting gangster, selling drugs, and warring with each other. And it’s the story of how one dispute between two parties went way too far and brought kids into a position where they didn’t know what to do and ended up making all of the wrong choices. It all starts with Johnny Truelove (Emile Hirsch) and his buddies lifting weights in his garage. That’s where we meet Johnny, Frankie (Justin Timberlake, in his big screen breakout), and all of their other friends. We even meet a guy named Elvis (Shawn Hatosy), who is doing Johnny’s chores for him, trying to repay a debt. And Johnny treats this guy like dirt, making fun of him with all of his friends.

we also meet a family, living their quiet life in a nice suburban california home. this family includes sharon stone as the mother, anton yelchin as the young son, zack mizursky, a father, who mainly stays quiet and calm, and an older son who comes to visit. that older son is jake mizursky (ben foster, playing crazy like nobody else). jake comes to dinner, but really just wants a moment with his dad to ask for money. when he doesn’t get it, he storms off. but not before zack can come running out and ask his brother to take him along. these two are pretty close and zack really looks up to his brother.

we see that in another scene too, where zack comes to visit jake and his girlfriend without his parents knowing. the parents freak out, calling jake’s house and demanding that he bring zack home. and the next morning, all hell breaks lose for zack. his parents find a bong in his room, zack storms off and runs away, and the next thing you know, he’s being kidnapped.

but before we get to that, we see the connection between the johnny truelove and friends characters and the nice, calm california family. the connection is jake. he works for johnny on jobs and owes johnny a lot of money. apparently someone else owed johnny a lot of money and jake paid that person a visit to straighten it out, and only made things worse. now the debt is on jake. and johnny wants his money. when jake starts mouthing off to him, johnny attacks jake and it turns into a pretty big fight. glass windows are shattered, a gun is pulled and even fired, and the war has begun.

this war involves a couple of back and forth attacks. first it’s johnny calling jake’s boss and getting him fired. it’s a great scene with ben foster really hamming it up as a guy who desperately needs his job and can’t handle losing it. then johnny and his friends go out to eat at the restaurant where jake’s girlfriend works, act like jerks to her, and don’t pay their bill. now it’s jake’s turn to retaliate. he gets a couple of friends and attacks johnny’s house, trashing the place, destroying everything they can. johnny is there, hiding from them, and when his friends show up the next morning, he tells them that he wasn’t. he just can’t lose face.

that’s when the boys are driving around and pass zack, who is just walking through a park. they hop out of their van, throw the boy to the ground, kick him a little, and then grab him up and take him into the van. zack is their prisoner. they don’t know what to do with him, or where to take him, and it would have been nice if the movie gave us a shot of him inside the van and what the boys were talking about with that. but instead, it gets them to their first stop pretty quickly, which is one of frankie’s friends’ places. they bring zack to the back room, tie him up, and try to think of a plan.

the plan ends up being to just have zack hang out with frankie for as long as possible. this includes staying over at frankie’s house, meeting frankie’s father, and helping frankie do all the chores around the outside of the house the next day. this seems to be the lives of these kids. they don’t work, other than making drug deals and taking care of their houses. johnny has elvis clean his place. frankie has to do it himself. and the paren’ts aren’t really much of parents at all. there is either the overbearing olivia (sharon stone), or the parents who turn a blind eye, including bruce willis as sonny truelove, and frankie’s father, and even a girl’s mother who refuses to talk to her daughter when the girl comes and asks her mom for help.

the second part of the movie is all about the kids hanging out, and it’s by far the best part. zack is treated to a few days that end up being the time of his life. he sits around, plays video games, talks to girls, and smokes a lot of pot. when it gets to the point where he can’t stay at frankie’s place anymore, the boys rent out a motel room for zack. they start throwing parties, including one where zack and a couple of girls sneak into the pool next door for some skinny dipping fun.

all of this leads to the final act where things get out of control. you can see it coming in johnny throughout the movie, like when he sits down on a bed and tries to talk to frankie about the possibility of killing the kid. then johnny calls up his father’s lawyer. he even tries talking to the kid himself, but nothing seems to be working. the risk of letting the kid go is just too high. so they decide to have him killed. it’s an extremely upsetting ending. and i like that the movie follows the other kids after the murder is over, to see them each getting what’s coming to them. the final sharon stone scene goes on a little too long, but otherwise this movie handles everything well. the actors really bring their roles to life, from ben foster, to justin timerblake, to anton yelchin, to emile hirsch. lots of people find it hard to believe hirsch as this boss of the group, because he’s kind of small, but he’s turns out to be completely believable. he’s the smaller, trash talking tough guy, and he is intimidating. he even pulls out a gun a couple of times to gain control over characters. this is a hell of a movie, sad and scary and always intense.