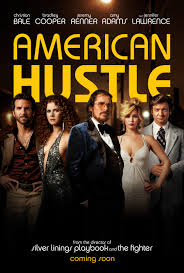 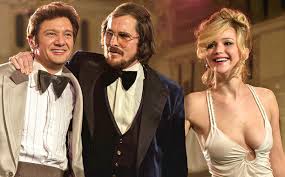 A pretty cool and interesting movie about corruption, con men, and a giant scam that works on many levels.

American Hustle is a pretty entertaining film. It’s got cool characters in wonderful outfits and hairstyles, using voice-over to give us the perspectives on their own lives. The central plot line is about a sting operation involving all different parties and interests, but the movie gets started long before that, telling us the story of Irving (Christian Bale), and how he got into the scamming business. This film is definitely meant to be in the style of Goodfellas, and in many ways it accomplishes its goal, capturing some of the same feel and tone of that film. Aside from a clever and twisty story, great music, and fascinating characters, there is also some witty humor here. But despite all these things, there occasionally seems to be something missing. Violence. The movie feels like it should have some violence, and it really doesn’t. When tension and setups don’t get the right level of follow-through, we still enjoy it, only not as much as we would have otherwise. There’s a lot to like about this movie, but if it had just gone a little further, it could have been something great.

American Hustle is a good movie. It’s not up to the same level as some of director David O. Russel’s other most recent films, (The Fighter and Silver Linings Playbook), but that’s only because those movies are so flawless. Now, to be fair, there’s more buzz and higher expectations for American Hustle than anything this director has ever done before. That’s because this one is the movie that combines every big actor who has been in one of his films in the last few years (other than Mark Wahlberg,) and puts them all in a period piece, iconic looking seventies movie. the movie nearly pulls it off too. Save for a couple of minor problems this is a pretty great film.

The movie is about a giant sting operation. it’s based on a real story, and the operation was known as Abscam. I suppose the name comes from a giant scam involving the impersonation of an Arab. it all starts with a shot of Christian Bale, playing Irving Rosenfeld, showing us his huge belly (this actor loves to gain or lose massive amounts of weight, see the machinist or The Fighter). After that he is putting on his toupee in front of a hotel room mirror. This is an elaborate process involving some paste that needs to be applied to the top of his head, some fake hair glued down on top of that, and then a comb-over going on the fake hair..It’s a fun scene to open the movie with because of how detailed, quiet, and unexpected it is, and bale plays it exactly right.

From the loneliness of this room, Irving goes into another room where he and Sydney (Amy Adams) and Ritchie (Bradley Cooper) immediately debate how they are going to handle the meeting they are about to have. all of them are on edge. and then suddenly we’re in the meeting and jermey renner’s mayor carmine polito is sitting on couches with them, sliding briefcases full of money around, and the whole thing goes terribly wrong. this is the start of the movie. we don’t really know what brought us to the point of what we just saw, or what exactly it is that we just saw, but it certainly has our attention.

now we go back to the beginning of the story, with irving working as a local con-artist. we get his voice over explanation of everything and this takes us all the way back to when he was a kid, throwing rocks through glass windows to help his father’s glass selling company. this movie is unquestionably david o. russel’s tribute to goodfellas, filled with long panning and quick zoom-in shots. it’s got multiple characters using voice-over to speak to the audience and present their perspectives throughout the film, and then of course, there’s this beginning that starts out in the middle of scene we will come to later on, and then a flashback to irving as a kid (all like the story of henry hill in goodfellas.)

irving goes into business issuing fake loans, and he also crosses paths at a pool party with sydney. suddenly we are hearing her voice-over and learning about why she was attracted to him. they hit it off and start spending time together and it isn’t long before she finds out what he does. that’s when she storms out of the room and irving starts thinking he might never see her again. only sydney comes back in, this time using a british accent, and pretending to be someone else. in the flash of an eye she has transformed into a new persona that she will use for the business of scams and illegal activity. she and irving will now be partners in crime.

but irving has other things on his plate besides sydney and the scamming situation. he has a wife at home who doesn’t really do anything other than hang out around the house and take care of their son. this wife is rosalyn, played by jennifer lawrence, who definitely looks too young here to be playing this role. i know the part calls for a woman who is younger than christian bale, but does she have to look like a kid? jennifer lawrence is 23, and has such a baby face. on top of that, this isn’t exactly good-looking, batman christian bale. this is fat, balding, older christian bale.

after we have met all of our initial players (meaning irving and the two women in his life), we see the sequence of events that will change everything. irving and sydney get busted by ritchie who goes undercover to make a deal with them and then catch them in the act of selling him on something illegal. they now have no choice other than to go to work for him. this is the start of what will be the real story of the movie.

The actual scam is quite elaborate. it involves a mayor who wants to rebuild atlantic city and some senators who help get a man through the process of becoming a citizen. this all gets especially interesting when a gangster comes on board, (played by a very famous actor, in a surprise cameo.) he really only has one scene, but then there are many scenes that follow it and speak about this character, and have his men out there, representing him. this mafia boss is another facet of the whole operation that puts everyone involved in more risk than they ever were before.

aside from the clever plot and twists of this movie, there is also some great humor. in particular, i love louis c.k. here, and the interaction between he and bradley cooper. there’s an ongoing bit about an ice-fishing story that is just hilarious. and then there’s some fantastic music, all sixties and seventies classic tunes that fit the mood here just right. even the outfits and hair styles are terrific, including both bale and cooper going all out with their hair.

and yet, there does seem to be something missing. the movie lacks violence. the film feels like goodfellas and casino, with threats around every corner, and yet very little catastrophe or consequence results from some of the situations. take the jennifer lawrence character, rosalyn, for example. she is playing a more reserved version of the sharon stone character in casino, Ginger, here. equal parts stupid and crazy, rosalyn has a couple of scenes where she goes over to the wrong people and says the wrong things. only the results are minimal. we hold our breath and cringe, the same way we did when billy batts taunted tommy in goodfellas, only the results are less than satisfying. short of that lack of violence, however (and this problem could have been solved with just one strategically placed scene as rosalyn gives away irving’s secret, the gangster’s men pick him up, and still nothing consequential happens,) the movie is great. bale is in top form here, keeping us glued to the screen and infatuated with his character. this is an incredibly interesting film.