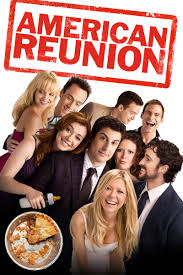 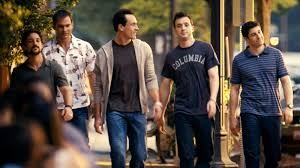 Possibly the best movie since the original, yet still not all that good, the movie has it’s moments, even if they are often little more than nostalgic recollections about that first film.

Here’s a sequel to the original movie that actually seemed like it was working. In the first half. The second movie was a less funny carbon copy of the first, and the third movie tried to be so different that it even changed the characters. But this time out, what we get is a nostalgic riff on the first film, remembering the good times and looking back at how much things have changed. The movie really works for a while, but then it just starts dropping the ball in order to get to the punchlines faster. Understandably the jokes are supposed to be more extreme as a movie goes on, but rushing them to get more jokes in means taking out the setup, and that leads to the jokes being stupid instead of funny. The movie does end up falling apart and becoming a mess.

American Reunion is a movie in the series that actually gets some things right. It’s the first that’s been true of a film in this series, since the very first movie. That’s because this film doesn’t want to be a carbon copy of the first film (like the sequel was), but it also doesn’t want to be tremendously different, to the point of almost no recognition, (like the third movie, American Wedding was). That third movie only featured a small handful of the key characters, had terrible jokes, and even changed the persona of the Stifler character, making him into an annoying cartoon version of what he once was. I’m glad to say that with American Reunion, he’s back to his old ways.

The movie has two or three major things going for it, and it finds ways to continue these things throughout the film. On top of that, the movie has a plot that actually manages to be kind of clever in it’s first half before falling apart in its second half. Whatever situations seemed plausible in that first half of the film, with the writer’s explaining how it could actually happen and make sense, suddenly stopped being explained in the second half. An example of this is why Jim (Jason Biggs) ends up driving a high school girl, Kara, home after a night of partying. The scene happens in the first half of the movie, and it is explained by how they are both going to the same place, because she lives next door. In the second half, we get a scene of her just popping up in a bed next to him while at a party. And it’s a party where we didn’t even know she was there.

The general story to this movie is that all five of our main characters, (the five guys, including Stifler,) are much older now and live in the world of adults. Things are different, but at the same time they are still the same. The movie works when it mentions things from the first film. It treats these storylines like memories, such as when Jim is at a bar and the bartender (who was also in his graduating high school class), pulls up a video of him doing that strip tease dance in the first film.

Another area where this movie works is in its references to how the guys have gotten older and more mature, and how things are different for them now. There are quips about cell phones, bringing a bottle of wine to a party, and what is or isn’t considered classic rock. The movie embraces reality show dance competitions, and really makes the case that these kids were from a different time. One thing that helps bring these ideas to the surface is having some of the characters in this movie be high school students who are clearly part of a different generation.

The last clever thing about this movie is the way that it shows each member of the group in an adult life. Stifler works at law firm, for example. It might not be his character (he is more of a bartender type), but that’s the point. He and most of the others end up selling out in order to have an adult job. Oz, (Chris Klein), is a big time celebrity sports commentator. Jim and Kevin are both married, and Finch is apparently the most mysterious and also the most interesting man on earth.

Things do pick up, at least for the rest of the first half. The guys have one meet up night at a bar that ends with Jim waking up the next morning lying on his kitchen floor, as if it’s right out of the movie The Hangover. There’s a funny nude scene there,  in the kitchen, and then the crew heads to the lake. They end up spending both day and night there, and the night turns into a party for, Kara, the young neighbor. We get some fun scenes at this point, like Oz and his girlfriend playing “never have I ever,” with Heather (Mena Suvari) and her boyfriend. And there’s a great moment between Jim and Stifler, where Jim has to ask his friend, “What the hell are you talking about? I’m not going to cheat on my wife.”

That night ends with what is probably the funniest situation of the movie, with Jim and his friends having to sneak a drunk Kara back into her house. There’s a great moment where Jim is holding the girl’s naked, unconscious body, and he is right next to the window of his own house, with his wife having her back turned. Another great moment has Jim hiding under a boatload of stuffed animals, with Kara telling her dad to get one of them for her. Everything about that scene is handled perfectly, from the dad mentioning how he would kick one of these kids’ teeth in, to the way that Finch and Oz entertain the mom downstairs while all this other stuff is going on above them.

With comical slapstick scenes like that, it’s a real shame that the movie falls apart so badly in it’s second half. Instead of realistic situations, or even semi-plausible ones, we get Jim and Michelle dressing up in sex gimp attire at a party. It’s pretty stupid. So is a moment where Stifler has a run in with an old flame and ends up with some pretty disgusting results. Even the encounter between Jim’s dad and Stifler’s mom amounts to much less than it should have, with the two of them smoking a joint and Jim’s dad finding himself hanging out of a window. When the movie goes for over the top just to be over the top, it’s pretty idiotic. When it goes for semi-plausible situations, like that sneaking Kara in scene, it is much better.

Unfortunately, The second half of the movie exposes this film for what it really is. When the guys show up at Stifler’s office to “save him,” or Stifler gets with another character’s mother, and we get chants of “Milf”, you know this movie has run out of ideas. All of a sudden, we start remembering the moments from the first half that didn’t work, like Stifler using a beer cooler as a toilet. The second half goes straight for the punch lines without considering the believability or providing any setup. This is not a good movie, but there are a handful of things that do work, before the film seems to stop caring, trying, or putting in any effort. .