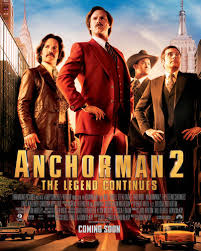 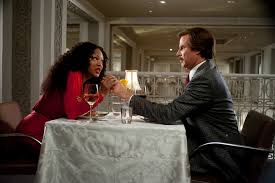 The humor is sometimes funny and sometimes stupid, but what really helps this movie along is a plot that isn’t afraid to go places or be different.

Anchorman 2 might not be nearly as strong a film as the original, but it still has a lot to like. It has a plot that goes in unpredictable directions and takes Ron Burgundy into all different creative situations that revolutionize the news industry. Aside from that, the movie does stay true to the original film, bringing in another story about the changing times and Burgundy not being ready for it. This time instead of being co-anchors with a woman, Burgundy has to deal with a black woman in the workplace, and she’s not a co-anchor, but his boss. There are multiple romantic storylines and major events going on here, and it all makes for a pretty interesting and enjoyable film.

Anchorman 2 is a pretty decent movie. It’s not great or hilarious or anything, but it does a pretty fine job of being a sequel to the first film and packing in both a bunch of jokes as well as a pretty interesting plot. I wasn’t a huge fan of the first anchorman movie, the way most people are, and it kind of grew on me over time. Even still, I hardly think it’s one of Will Ferrell’s best movies, when compared with such films as old school, elf, and stranger than fiction. But it’s a good movie and the sequel is a fine film as well.

Anchorman didn’t do tremendous business when it came out in theaters and it was only in the years that followed that, with the film on DVD, that word of mouth spread and it developed into a cult favorite. at that time, people started lobbying for a sequel and there were rumors of them trying to make it for a while. The project hit plenty of bumps and false starts, and then finally got made. This is a film with a cast that was not very known back when the first movie came out, but since then many of the actors have gone on to became a-level movie stars.

the original foursome of cast members is will ferrell, paul rudd, steve carrell, and david koechner. of those four actors, today only koechner is not headlining his own movies. steve carell went on to find fame and fortune with the tv series the office, and also movie stardom with his breakout role in the forty year old virgin. ironically, paul rudd became successful in large part due to movies like the forty year old virgin, as well, (which he was also in), that were produced by judd apatow. now rudd is an a-list star just as much as the other guys.

the premise of the first movie was that these four guys were newscasters during a different time. they lived during the seventies and were manly men who were filled with equal parts machoism, sexism, and stupidity. the change that shook up the first movie was that a woman came into their workplace and was given a job as a news anchorwoman alongside will ferrell’s character, ron burgundy. that woman was veronica corningstone, played by christina applegate.

the premise of the sequel is that it is now the eighties and times have again changed. instead of feminism, ron burgundy is now fighting and dealing with racism. instead of just a woman in the workplace, his new boss at a new television network is a black woman. when burgundy meets this woman, linda jackson, for the first time, he is frozen in place other than his lips, which can’t stop saying the word “black.” we’ve seen this joke before, like in austin powers movies where he can’t stop saying certain things based on the person he is face to face with, such as mole. in fact, it goes back even further to movies like uncle buck, where john candy also couldn’t stop saying things like ‘“wart and mole.” but even though the joke has been done before, it is still kind of funny.

the thing that makes anchorman work more than other comedies these days, that are just based on one joke (the internship or we’re the millers, for example), is that the plot has all different levels and turns, and keeps on going and changing. aside from the black woman angle, another one is that ron burgundy and his team are fired from their current position at the studio, and instead take a job at a 24 hour news network, which burgundy thinks is a ridiculous concept.

right away at the new network, burgundy and his team are faced with a challenge. the young head honcho at the studio is played by james marsden and he throws down the gauntlet for a competition over who can get the most viewing numbers in one night, him or burgundy. the only problem is that marsden is on during prime time and burgundy isn’t on until the middle of the night.

that’s when ron and his team come up with a plan. in one night they revolutionize the industry, making news about what people want to see and only the most entertaining stories as opposed to reporting about everything. they send brick out into harsh weather conditions to report the weather, champ only reports about the great plays in a ball game, and burgundy only does stories about how great america is.

that’s the first approach to how this movie shows the changing time of the news industry. it’s also a cool move for the film because most movies follow a formula where the main guy loses an early competition against the enemy and is embarrassed, only to come back and defeat the enemy at the end. by having burgundy win this early competition, the movie is starting off as unpredictable. it keeps going at that the whole way through, with all kinds of unexpected and unusual situations that happen to ron.

sure there are some cliches to the plot, like a storyline where he sells out and loses his friends only to have to get them back, but he also goes through all kinds of unexpected scenarios, including some major life changers. burgundy also goes back and forth between women here, which definitely keeps things interesting. and the storyline involving a car chase on the news is pretty great too. the laughs are definitely there, but they are not the main reason why this movie works. after all, none of them are all that hilarious. the movie works because it’s story is so creative and unpredictable.