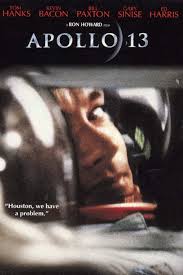 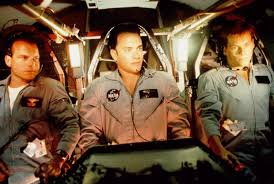 Incredibly interesting and powerful, this is a good movie, but it just tends to be a little too long.

This is a very intense, detailed movie that just goes a little too long for its own good. The movie is about a space mission to the moon that goes horribly wrong. I love all of the training and everything that happens on the ground before the team takes off. The details that surround the rocket launch are also superb. But once they get into space, the movie rushes to the big problem and suddenly we have over an hour of the movie left, and the cat has already been let out of the bag. It seems like the pacing could have been better, but other than that this movie does just about everything right. I love how each time they have a new problem on their ship, up in space, the guys down at NASA try to work out a solution as quickly as they can. There are tons of great actors on hand here; filling the big parts, and every one of them hits his mark. This movie definitely delivers more than expected.

Apollo 13 is a very strong and detailed movie. It’s the movie of a NASA space launch that goes horribly wrong. This is an American classic, starring tom hanks and directed by Ron Howard, with some wonderful actors backing hanks up. There’s the original team that’ trains together, including hanks (Jim), Bill Paxton (Fred), and Gary Sinise (Ken Mattingly). Then there’s the Kevin Bacon (Jack), playing the guy who takes over Sinises’ spot when a problem arises. Aside from all that, there’s Kathleen Quinlin playing Jim’s wife, and Ed Harris as the head guy on the ground, who is trying to guide these heroes back to earth.

The movie begins with the first landing on the moon. We watch the news broadcast and the reaction from the anchorman as Neil Armstrong takes his first steps and delivers his famous line. From there, we see Jim hosting a party where everyone is watching the landing on TV. At this party we meet a bunch of the characters before heading to NASA to see Jim in action.

He’s giving tours of the building and equipment when he gets the news that he will be taking another space shuttle up to the moon. There have been others since Armstrong, and by now the public is used to it, but for Jim, it’s the opportunity he’s always been waiting for. He puts together a crew and starts training.

We watch lots of simulations as the boys work out all of the little kinks while training. Then one day they get hit with some bad news. Ken Mattingly has been exposed to measles. It’s just a few days before the scheduled launch and this Changes everything. NASA will not allow ken to go up into space with them, since he is likely to get sick during the mission. That means either the boys abort the flight and wait to take it sometime in the future, or they get a replacement for ken. It’s Jim who makes the decision.

He ends up going with jack, in ken’s place, and the scene where he tells ken that it was his decision is a pretty great one. There are scenes of Jim reassuring his wife that everything will be okay, even as his son questions a catastrophe that happened to two other astronauts not too long ago, when a fire broke out, and they couldn’t get the escape hatch opened. There’s also an issue over whether or not Jim’s wife, Marilyn, will go to the launch. She has been there many times before and feels that this one might be too much for her.

There is a lot of talk about the number 13 being unlucky, and why this flight has to be named that. On top of that, the ship will be arriving in the moon’s atmosphere on the 13th of the month. The launch takes place on the 11th and goes smoothly. It is shot fantastically with a camera that whips around the tower, which the rocket is attached to. We get to see great detail as the men take an elevator up and then cross a bridge to get on board. And the actual launch into the air, with pieces of the tower falling apart as the rocket lifts off, is also pretty great. This is absolutely the coolest scene in the movie.

The boys get up into space and start having some fun right away. They put together a video to show people back home and broadcast it live to NASA, complete with music and everything. The guys think that the broadcast is going out to national television, and that was originally the plan, until the networks dumped it claiming that putting a man on the moon was no longer news. Now it had become just routine and business as usual.

The problems start when some of the equipment and engines start falling apart. The movie is only an hour in at this point, and that’s fine, except for that it’s got a running time of over two hours. So it’s a little soon for the big problem to start happening. I loved everything that happened while the guys were down on the ground, but we spend over half of the movie with them in flight, and it just feels like too much. Especially since the big problem happens so quickly into their flight.

Once the problem happens, the rest of the movie becomes about recovering from it. The first problem leads to many others, including an increase in the carbon dioxide they are breathing and a decrease in their oxygen supply. The guys have to go through all sorts of maneuvers to solve these problems, including turning their power off for large portions of time, and letting the ship just fall out of space.

Each strategy is gone over with us in great detail, and usually it’s a lot of fun. We see one situation where they have to use a certain amount of equipment to turn a square object into something that will fit in a round hole. In another situation, they have to navigate their falling ship, toward the earth, by keeping the sight of the earth in their window at All times.

Apollo 13 is filled with amazing details and moments. I love that down on earth, they bring in Ken Mattingly to get in the simulator and try to find solutions to their problems. When one NASA technician tries to hand ken a powerful flashlight, he refuses it saying he only wants the equipment that they have at their disposal up there in space. He doesn’t want anything that they don’t have the ability to use too. As good as the movie is, it does drag on at times and get kind of slow. A shorter running time would have helped with this problem. It’s a very good movie, but just needed to move a little faster in it’s second half.