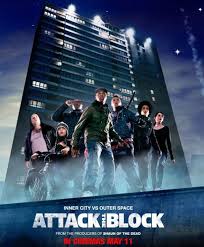 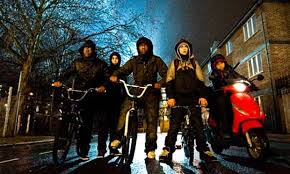 A fun and almost-campy movie about aliens in the hood and the locals who have to take them out.

An absolutely great movie, this one is like aliens in the hood, only instead of being a spoof / parody movie, like the Scary Movie films (and believe me, they parodied aliens with The War of the Worlds and Signs,) this movie is more realistic. It’s definitely a dark comedy, but it’s about real kids taking on a threat that suddenly makes them not look as tough as their used to projecting. These kids are not heroes. In fact, when we meet them, they are mugging a woman and knocking her to the ground. But during the course of the film, we come to love them, and the crazy amount of slang they use to make sense of their world. Subtitles are definitely a must for this film, and help to really make the experience understandable. On top of the humor and the witty dialogue and everything else, the aliens and action are incredibly cool. This isn’t about computer graphics, like most movies would do for aliens these days, but instead, the movie goes for practical effects, and boy do they look terrific.

Attack The Block is a different kind of alien movie. It’s kind of like a spoof on alien movies, only not in slapstick, goofy sort of way. Instead, it’s more like a “what if the people who had to deal with the aliens were the most unlikely group of people for this situation imaginable?” No scientists or military or police, but just a bunch of local gangster teenagers. This isn’t about teenagers witnessing the events, like super 8 from earlier this year, but about the teens being the ones who handle the situation and take the aliens on. In that sense, this is kind of like Shaun of the dead, the Simon Peg – nick frost movie where unemployed slackers took on zombie infested London. Here, it’s the alien infested projects of London.

Like Shawn Of The Dead, this movie also has nick frost in it, and Shaun’s director, Edgar Wright, produced it. So you can bet there are a ton of connections, just in the ways of genre, tone, and what the movie is trying to accomplish alone. That it’s a smart movie instead of the B movie it easily could have been is impressive. It’s director Joe Cornish’s debut film, but you can bet we’ll be hearing his name a lot in the future. This is definitely his Shaun of the dead; complete with characters we want to laugh at just for their everyday way of life.

The characters here are teenagers, but they’re also low-level criminals. They hang out together in a sort of gang, and when we meet them for the first time, they are robbing a woman in the street. The movie does something that most films wouldn’t dare to with this opening scene. It presents the situation from the woman’s point of view. She’s the victim, and instead of showing us the kids, in such a way that might make us sympathize with them, we are following the woman as she walks down the streets. The boys attack her and they even throw her to the ground and take the ring off her finger.

But then something comes crashing down, out of the sky. It lands in a car with a small explosion and the woman takes this as an opportunity to run away. The boys, however, are more than a little curious. Their leader, Moses, goes into the car after it and gets scratched on the face. The creature runs away and the boys go chasing after it, shouting about how much they want to get it and kick it’s ass. This is not your usual alien movie.

They find the creature in a shack, blow it up, and then go walking around the neighborhood with the dead carcass dangling from their hands like a trophy. They go to see the head drug dealer who Moses works for and while they’re over at his apartment, in his marijuana plant greenhouse room, a bunch of bigger aliens come dropping from the sky. The kids see this out the window and go out to fight.

This is the basic premise of the movie. Or so it seems. As it happens there’s a lot more going on here then just the kids going after aliens and fighting them. The first half of the movie is mostly about introducing characters. We meet two local ten year olds who want to be cool like the other guys (our main characters are really only 15 themselves.) we also meet nick frost and his nature channel-loving buddy who work for that head drug dealer, High Hats. This frost character doesn’t do much more than sit on the couch watching TV and getting up to answer the door when somebody knocks. He could almost be the future version of his character from dawn of the dead, like this is what that character ended up becoming.

The second half of the movie is about the apartment complex. “The block.” pretty much the entire second half takes place in the building, running around the hallways, going from floor to floor, and that’s pretty cool. It gives the movie a sort of die-hard feel, or any of those other movies that all take place in one location during one night. The movie spends time in a couple of the different kids’ apartments as aliens come out and attack them.

What helps the movie along is that there are only a small handful of kids who make up the gang. Maybe about five total. And they do start dropping one by one. That small amount of characters makes it really easy to keep track of them, unlike other gang films like the warriors, where one or two faces stand out, but we never have an exact count of how many people are in the gang or who each of the different characters is.

Another thing great about the movie is that the woman who was attacked at the start of the film comes back into the movie in a major way and even ends up teaming up with the kids to stop the aliens. She basically realizes that these kids aren’t as bad as she originally thought. They are just misguided. In the middle of the movie, she gets the police to come after them. That’s pretty much the half waypoint of the film and certainly the big turning point that puts priorities into perspective for everyone involved. At first it seems like these kids are the enemies, but when the aliens attack, everything changes, in the struggle for life or death survival.

Attack The Block is a really great film. That’s because the characters might be just kids, but they are tough and gritty and they act like young adults who run their block. Their fight against aliens is like a fight against a rival gang, where these kids have to protect their home turf. And it’s a testament to the movie that as it goes on, we get to know the kids and actually care for them. The aliens themselves are cool, and the action is great too, but what makes this movie so much fun is the humor created by the initial situation. These characters are funny and their passion for going after the aliens brings tremendous levels of energy into the film. It’s a smart, witty movie that is creative and entertaining at all times. It even knows that there needs to be a human bad guy too, and not just the alien threat, which is something that the movie Aliens taught us with Paul Reiser’s villain on the human side. Attack The Block has it all.