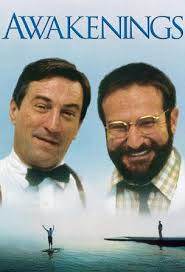 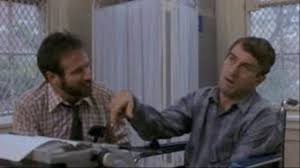 An unusual movie about a medical problem and the doctor who strives to solve it.

Awakenings is one of those medical miracle movies that tells the story of a doctor, Dr. Sayer, who just won’t give up. This is a man who defies the board and his colleagues with the pursuit of his beliefs. The movie wisely opens before Dr. Sayer (Robin Williams) is even a doctor at all, but just a medical researcher. He’s done work with animals, but never with people, and is a lot more like a scientist than a doctor. Still, the hospital needs someone to fill a certain position and is desperate, and Dr. Sayer needs a job. So despite his attempts at convincing them that they don’t really want him, Sayer ends up being offered that position and accepting it.

Dr. Sayer works on a floor that is dedicated to adult patients whose bodies have pretty much frozen. The people sit still in chairs, unable to even move their faces. As a result of their lack of progress, most people, including the other doctors, have given up on these patients. But Dr. Sayer one day notices something different about one of them. He notices that an older woman patient is bent over a certain way that is different from the way she was when he was looking at her, just moments earlier. Somehow, she has moved.

Sayer starts thinking about what this might mean. He looks at what she’s looking at. Is she thinking about getting water at the water fountain, or about going over to the window to look outside? Whatever it is, it launches him into an awakening of his own, where he starts to experiment with what else these people can do.

His big discovery comes from throwing a ball in the direction of a patient. These patients might seem frozen, but when a ball comes flying at them, their hands go flying in the air to catch it. It’s a reaction, a reflex, and that’s what the other doctors tell Sayer, but he wants to believe that it’s something more. His main nemesis in this movie is played by John Heard as a higher up colleague and doctor at the hospital. Heard is in no way a bad guy. He just doesn’t believe that Sayer is really onto something and he lets the man know it.

And yet Dr. Sayer continues. He arranges the patients into a circle, all sitting in chairs, and throws a beach ball at one of them. Each patient hits the beach ball into the air and at another patient and that other patient hits it at someone else. And just like that, these frozen patients actually have a game of ball with each other. It might not be much, but progress is certainly being made.

The huge event of the movie comes when Dr. Sayer picks one patient to run an experiment on. The patient is Leonard (played by Robert DeNiro), and with the permission of Leonard’s mother, Dr. Sayer gets the board to agree to let him test a new kind of medication on him. Sayer tries it out, and the medication actually works! Leonard snaps out of his freeze and basically comes back to life. Sayer wants to try this one other patients too, but there is just not enough money. that’s when a little bit of charity from some people who care kicks in.

the next thing you know, we’ve got a room full of patients that are all waking up from a thirty year freeze. the last thing they remember was seeing themselves in the mirror as a young person, and now here they are. at first it seems amazing, like a dream come true, but the doctors are suspicious and rightly so. what if the effects of the drugs where off? and what if these patients can’t deal with having been away from the world for thirty years and having lost that much of their lives?

the patients snap out of their freeze at about the halfway point of the film, and i’m glad that this movie still had a long way to go. that meant there would be another problem and that all would not not stay happy and successful. and indeed there was. the patients start to want their freedom. leonard in particular, becomes their common voice and demands to be able to take a walk by himself. the hospital staff, including dr. sayer, all agree that this is a bad idea.

things get even worse. leonard surrounds himself with patient bodyguards, and as his condition worsens, the drugs start affecting his mind. the problem with great overnight success is that it is untested and the results are unpredictable. this is what dr. sayer finds out, that the other doctors on staff were especially weary of. things get out of control and end up backfiring.

awakenings has a hell of a story going for it. it’s not only the story of miraculous success, but also of the downfall that follows. it’s the story of ambition and pursuit, and in many ways reminds me of williams’ other doctor movie, patch adams. there he insisted that laughter was the best medicine and made enemies with the traditional older doctors on the staff. here he’s less of a rebel, but still has that out of the box hunger and strives to find an answer. the movie is about his quest and the results that follow him, when his trials actually turn out successful. it’s a very interesting film. Yes, it is sometimes slow, but overall it’s pretty compelling.