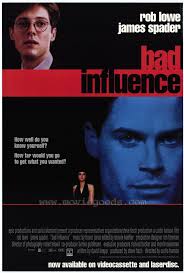 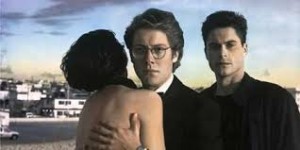 It’s Fatal Attraction meets Unlawful Entry, and is predictable and routine, yet still kind of fun.

Bad Influence is a movie that definitely feels familiar, yet still ends up being kind of enjoyable. There’s nothing new or creative here, but the movie is still done well, and that goes a long way. The story has a guy meet a stranger at a bar, become friends with the stranger, and then learn that the stranger is into some pretty devious things. By the second half of the movie, the two have become enemies, trying to outwit the other one and the stakes have been raised to go from robbery to murder. A major reason why this movie works, despite being both formulaic and predictable, is rob lowe as the villain. he’s pretty good here, and so is the director, Curtis Hanson. This is Hanson’s early entry into the genre of film noir, which he would master less than a decade later with his classic film L.A. Confidential. Bad Influence, is far from great, but it is still a fun film.

Bad Influence is an enjoyable movie. It’s nothing totally fresh or creative, but it’s still kind of fun. I suppose that comes from being well made. This is an early nineties movie that feels like an eighties movie starring two eighties icons who are now young adults. Those men are James Spader and rob lowe. Spader usually plays the bad guy and Rob Lowe the likable good guy; only here the roles are reversed. Lots of times when that happen, the results are lousy. Like when Bill Murray played a gangster and Deniro played a cop in Mad Dog And Glory. Only, here, in bad influence, it actually works. Rob Lowe plays the villain nicely and the movie ends up being kind of fun.

The story is pretty much exactly what the title makes it sound like. A successful businessman, Michael (Spader) is at a bar by himself one day and he meets another guy who saves him from getting his butt kicked in a fistfight. That other guy is Alex, played by rob Lowe. Alex is a hot shot who doesn’t take crap from anyone and when he and Michael cross paths again, they become instant friends.

They start spending a lot of time together, with Alex giving Michael all sorts of advice. Michael tells Alex about his problems, like dealing with a guy at work named Patterson who continually sabotages Michael in order to get ahead. Alex, then, tells Michael how he should handle it. Alex is all ids. He’s the guy who Michael wishes he could be like, the cool kid in school, and he even seems to get the hottest chicks. Michael can’t get enough of being around this guy.

Can you predict what’s going to happen yet? The title really does give too much away. Alex will become a problem and Michael will have to deal with it. But first, Michael goes along with this guy for a little longer. Another problem that Michael mentions to Alex is that he is engaged, but nowhere near ready to be married. He fears the commitment he has gotten himself into. That’s Alex’s cue to help him out and do something to get his friend out of the commitment. Only it’s not really what Michael wanted and certainly not the way that he wanted it.

Things get pretty ugly, pretty fast. Alex might seem great because he is so tough and so cool and does what he wants without thinking about consequences, but one night, Michael gets a glimpse of which this guy really is. It’s about halfway into the movie, with Michael completely drunk, that the story takes a very dark turn. I’d like to say that it was unexpected, but it wasn’t. Maybe just the way that it happened, bunny mask and all, was a little surprising, but we certainly knew something like this was coming.

The second half is where the movie really loses it in terms of creativity. Whatever momentum this film had going in the first half, to possibly be something different, in the second half it all goes away. That’s when the movie falls into a formula and becomes about these two guys doing horrible things to each other. In the first half of the movie, we knew it was going to happen, but we had no idea how it was going to happen. But once the cat is let out of the bag, and we see Alex’s true colors, the rest is all downhill.

With that in mind, the second half is not all that bad, it’s just clichéd. It still does hold your attention, however, as the momentum and story continues to build. The stakes are raised as things become much more serious for all characters involved. Murder, tapes, and a set up all become part of the plot. Instead of a best friend, Michael has a brother who comes to his aid, and thankfully this movie at least avoids the cliché of having the brother get killed. Speaking of deaths of friends, unlawful entry is another example of a movie that uses a variation on this formula.

Curtis Hanson directed Bad Influence, and that’s probably the main reason why I watched it. This was Curtis Hanson before he becomes a great director. Here he was a guy still honing his craft, but he certainly showed signs of how talented he was or would eventually be. Hanson’s best movie, of course, is L.A. Confidential, which is a perfect film noir. Bad Influence is a sort of film noir too, bringing us into a seedy world of criminals. At least a little bit. The movie is filled with shadows and noir like lighting, (just think of the interior shots of Michael’s apartment.) it’s a well-made movie that just needed a better plot.

Bad Influence is worthwhile, although it is also not far off from everything else that we’ve seen before. It’s basically the story of a psychopath who forms a relationship with a friend before allowing that friend to know who he really is. The first half is all setup and it is by far the better half. That’s where he get to know Michael and his problems and why he might actually embrace being friends with this guy. The second half of the film is where things become routine. The movie is dark and creepy, and if only it has some more creativity, it might have been fun. It could have also used some other characters or side storylines. The movie is ok, and certainly has some redeeming qualities, but for the most part it really is the same old thing.