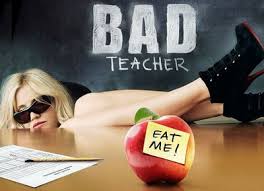 There’s a pretty good setup here, with a story about a teacher who just doesn’t want to be there, and hates her job. She also doesn’t really care about getting fired, and has no problem with letting the world know that. But then some new incentives come up and suddenly her life and situation change. Now she starts caring about things, even if they are superficial. First it’s the new boy in town. Then it’s some prize money that she wants to win in order to get a boob job so that she can impress that new boy. There’s a lot of attention paid to silly, one-noted ideas like these. If only the story had more creativity, this would have been a better film. Cameron Diaz does her best, and is pretty funny at times, but it’s not enough, and the story gives her very little to work with.

The premise of the movie works. It worked when Billy Bob Thornton used it in Bad Santa, and it works again here. A person who has one of the jobs that would require him or her to be extremely responsible (working with kids) just doesn’t care. In fact, not only does this person not care, in many ways they go out of their way to be a mess and show just how uninterested they are in the job. Take Elizabeth Halsey, (Cameron Diaz), the middle school teacher who drives backwards, speeding in her car, with a cigarette in her mouth and music blasting, as she leaves school on what she thinks is her last day. She nearly hits a bus and could have easily run over a kid, but she just doesn’t care.

The movie has a pretty smart opening. It has Elizabeth ready to check out, on her last day of school. She’s about to marry a guy who is so financially successful that it will enable her to retire. She stands in the teacher’s lounge with all of the other teachers and the principal (what a great way to meet the staff, early on), and makes a speech. And during her speech, we get a montage of the way she is as a teacher. We watch her intentionally avoid both her students and peer teachers in the halls.

Elizabeth gets home, things fall apart with her fiancé, and it’s back to school for the start of the next year. Now the premise has been setup and the movie has begun. It was a nice introduction, but that kind of clever writing is not maintained the rest of the way. Elizabeth has two new men in her life at the school, both of them teachers. There’s the loveable Russell (Jason Segal) who is crushing on her, but who Elizabeth won’t look twice at because he has no money. Then there’s the new substitute in town, Scott Delacorte, (Justin Timberlake) who is the son of a famous watch company owner, and who Elizabeth wants really bad. She wants him for his money, even before she really meets him.

After seeing a photo of Delacorte’s ex-girlfriend, and how she had really big boobs, Elizabeth makes it her goal to get new, bigger boobs. She looks at pictures and even goes to see a plastic surgeon about it. Then she finds out the cost and is back to square one. But she doesn’t give up on the dream. This is the second act of the movie, following that introduction with her fiancé, and there’s a lot of good humor in it. Mostly it comes from Jason Segal, who is the highlight of this film.

Segal is a natural talent, coming out of the Judd Apatow camp. He’s not only an actor, but also a writer, having written his first starring vehicle, forgetting Sarah marshal. I mention his writing skills because here, as Russell, he probably wrote or fine-tuned a lot of his dialogue, to make it fit for him and it works. Whether he’s arguing with a kid about Lebrun jams vs. Michael Jordan, or listening to Delacorte and his new beau tell a story about how they got lost, Russell’s dialogue and reactions are priceless. He’s the good guy of the movie, even though he smokes weed in school, but this is a movie where even good guys do bad things sometimes. Just look at Elizabeth Halsey, an anti-hero if ever there was one.

A lot of the movie is funny. In fact, the first half of it is not really bad at all. There is humor around every corner and it’s the kind of movie that you can watch again and again, each time picking up on new things (like how she tells a parent that her fiancé was sleeping with his sister.) but the problem is, after a while the movie needs to get to a real plot. It can’t just be about her caught between these two guys at school forever. Something has to happen. And what happens is kind of dumb.

First of all, the movie gives us a villain named Amy Squirrel who is extremely annoying. Squirrel is another teacher in the school, and she is onto Elizabeth. When Elizabeth hosts a provocative car wash with the students and makes a lot of money, she takes a bunch of it for herself. Squirrel sees her taking this money, and from there the two of them are enemies. Amy squirrel is the most extreme character in this movie, and yet she’s not all that memorable. Maybe that’s because she’s not very funny.

She is the one who starts dating Delacorte, as the two of them seem right for each other, both absolute dorks (they share a love for the book “eat, prey, love.”) but the real plot of the movie starts when Elizabeth finds out about a prize she can win if her kids do the best in the grade on the state test (if only such a thing really existed.) now Elizabeth is working hard, teaching these kids for real. She’s doing whatever it takes, and that includes throwing dodge balls at their faces if they get the wrong answer. I like that she maintains her tough level of teaching by doing things like this, instead of suddenly becoming a good, sweet teacher. I also like that if a kid gets the right answer, that kid gets to throw the ball at his teacher. It shows that Elizabeth is fair, and maybe also that she is changing a little.

But then the movie takes an even darker turn in it’s final act. The premise was weak to begin with, so maybe they felt like they needed something more, but it doesn’t work. The point has left far behind the comedy element. The further the movie gets away from comedy, the worse it gets. This film started out on the right foot, but didn’t seem to have anywhere to go after that. Certainly not enough for an entire movie.

The problem with bad teacher is that the more it desperately grabs at attempts of having about plot, the more steam it loses. When it is just about premise, in the first half of the movie, things are actually pretty good. But then it becomes about her trying to get her kids to pass the test and becoming a good teacher. All the while, she is also working on her love life, going on an overnight trip with the students, dry-humping Justin Timberlake, and trying to find the right guy. It becomes pretty messy as it goes on. If only it could have maintained that same level of humor from the beginning, this could have been a much better film.