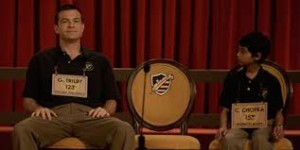 It’s Bad Santa meets Bad Teacher, only this movie is better than either of those because it not only has the humor, but also a clever and twist-filled plot.

A very good, smart movie, this film is about a guy who is a total jerk, enterring spelling bee competitions and insulting anyone who comes across his path. Guy Trilby (Jason Bateman), has no problem doing whatever he wants, whenever he wants. He’s a funny character. And of course he starts to soften up a little as the movie goes on. But there’s a lot more on the agenda here than the usual film about a guy going from hard and cold to soft and warm. For one thing, the jokes the Guy plays on the kids in the competition are all incredibly evil and hilarious. There’s also a great relationship between him and one of the kids in particular. And just when you think the movie is starting to get predictable and routine, it throws in some major twists. Not at the end, but in the middle. This ends up having a wonderful impact on the second half of the film.

Bad Words is an impressive and smart film. It’s a movie that takes the Bad Santa format and brings it to a whole new level. It’s been over a decade now since Bad Santa (Billy Bob Thornton) came out, and the next movie we got to follow the style, Bad Teacher (starring Cameron Diaz) didn’t exactly add much to the genre. That film wasn’t half the movie Bad Santa was, and mostly tiptoed around the PG 13 line, the way a movie like this never should. Well, Bad Words is the movie that truly takes the format a step further. This movie actually blows Bad Santa away, and does it not only with great humor, but also with an intelligent plot.

The basic story is that Guy Trilby (Jason Bateman) is an adult man competing in a National Spelling Bee competition against a bunch of kids. Now, that idea is funny in itself, simply because of how ridiculous it is. And the movie uses this idea to its full potential, having Trilby sit on stage with the kids, insult them, and play tricks on them. And there’s a reason behind all of it too, so this guy is not just a sadistic psycho. The laughs come rolling in from the very start of the film, as the movie uses a conversation between Guy and a father to establish who he is and what is going on.

The father assumes that Guy is a father of one of the kids in the competition as well. At first, Guy brushes the man off, telling him to find someone to chat with somewhere else. But the man continues to ask him questions, first thinking Guy is a father and then thinking he is the host. Only when Guy takes the stage does this man realize his mistake. Now this spelling bee is in a small town, and the people running it take Guy outside and explain that he won’t be allowed to partake. That’s when he brings in Jenny, a reporter who is doing a story on him. She poses as his lawyer, cites a bunch of legal jargon, mumbo-jumbo about suing them, and how the whole competition will be considered invalid. The next thing you know, Guy is right up there on stage again, winning the trophy.

He and Jenny now fly to the Nationals. There’s an interesting dynamic between them that is definitely less than friends. They sleep together on a regular basis, but neither of them seems to like the other very much. In Jenny’s case, when going at it with him, she insists that he not look at her. Jenny seems to like Guy simply because she knows he is holding onto a secret and not letting it out. She wants to know why he is doing this whole thing, enterring the competitions and willing to put himself out there, on national tv for this. He refuses to answer.

On the plane, Guy meets a small Indian kid named Rohan. This kid turns around over the top of his seat to look down at Guy and try talking to him. Guy wants no part of it, and continually insults the kid, who doesn’t seem to care. This kid is all smiles and thrilled to be here. He badgers Guy with questions such as what his favorite word is and what is the word that he won his last competition with. The kid is absolutely adorable. He talks about how that word, whatever it is, should be so special. Guy can’t wait to get off the plane.

When he does arrive at the Nationals Spelling Bee Tournament, Guy meets the woman who is overseeing the whole spelling bee, Dr. Deagan (Allison Janney), and also the man who sponsors the entire competition, Dr. Bowman, (Phillip Baker Hall), and also acts as a host. Neither one of them are very happy to have Guy on board. In fact, he and Deagan get into it a little bit, with him throwing insults at her about her being a lesbian and what she does with her girlfriend.

Deagan is the person in charge of arranging hotel accomodations for the contestants and parents. She gets Guy booked in a hotel, but when he checks into his room, he finds out that he has actually been booked into a storage closet. Now, they are ripping off Best In Show with this one, but even still, it’s pretty funny. And it is the single reason that he and Rohan become friends.  Rohan stops by his room / closet one day, mentions that he has a big room all to himself that is stocked with a full mini-bar, and the rest is history. Guy is in there faster than you can snap your fingers, raiding the mini-bar and chatting with the kid.

He and Rohan start a great friendship together where they go out and play jokes on people, and try to make each other laugh. These jokes include faking an accident scene to make it look like Guy ran over Rohan, and putting a lobster in a public toilet to watch it grab onto a guy who goes into the stall and sits down. While plenty of the jokes are not funny, it’s the way that the montages around them are filmed, with slow motion walking shots or shots of them doing things together, that happen to be a lot of fun. This friendship is absolutely the heart of the story.

And while Guy does become good friends with Rohan, none of it stops him from giving the other kids on stage a hard time, whenever he can. He takies Jenny’s panties and tells one boy that they belong to his mom, and that she left them over at Guy’s place last night. The kid doesn’t quite get it, so Guy starts talking to the boy about how his parents are getting divorced. Then with another girl, Guy squirts ketchup on her chair and pretends that she just got her period for the very first time. This guys goal is to be the last one on stage, and while he can easily win the competition, he is bored and wants to have some fun. Plus getting to the kids in this way might help eliminate them faster and speed the whole thing up a bit.

For the first half of the movie, it seems like this film is very one-noted. There’s this guy who is a total asshole and insults anyone who comes across his path. It seems like this will simply be a story about redemption where he becomes friends with the kid, learns to have some fun and do things for others, and maybe lets the kid win in the end. All of that seems cliched and predictable. Luckily the movie is much smarter than that. Right around the halfway point of the film, we suddenly start to get some major twists that throw us for curveballs. There are two of them, one involving Guy and Rohan, the other involving Guy and why he enterred the competition. The fact that they are not reserved for the ending, and instead dished out at us in the middle is an excellent move, pumping all kinds of new energy into the second half. The movie is very smart in this way. There are some areas that don’t work as well as others (the relationship between he and Jenny is pretty weak, especially since it is never clarified what the story she is writing is all about and how she’s writing it if he refuses to talk to her.) Even still, the movie overall is very crafty and entertaining.