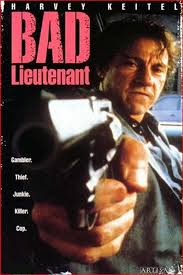 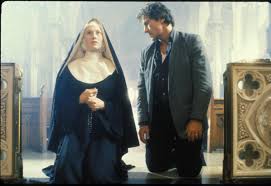 An okay movie about a strung out detective who harasses people and shoots up drugs every chance he can get.

Bad Lieutenant is a very average movie. It’s the kind of film that shows depravity and how bad things can get, but does it in ways that are meant to be shocking. It wants to offend the viewer, and in many cases it seems to put that ahead of its storytelling. When being offensive is a priority, you end up with a movie like john waters’ pink flamingos. Luckily Bad Lieutenant is a hell of a lot better than that.

The movie starts with a white screen and radio sports broadcasters talking about the Mets. The Mets have just made it into the World Series where they will be facing off against the Los Angeles Dodgers. The Lieutenant, (Harvey Keitel) sits in his car waiting for two boys to get out of the house so he can drive them to school. When the boys get in, The Lieutenant talks to them about how they need to kick their aunt out of the bathroom when she’s taking too long. It’s the most memorable conversation in the movie. After they finish talking about this, the boys talk about the Mets. This series will be of major importance to the movie.

That’s because The Lieutenant is a bad dude, who shoots up heroin every chance he can get, steals from people, such as storeowners, and puts all his money toward making bets. He bets heavy on the Mets series, betting against The Mets, and expecting them to lose. The series is 3-0 in favor of The Dodgers at the start of the movie, when the lieutenant first decides which side he will bet on. No team has ever come back from a 3-0 deficit in a best of 7 series, and so The Lieutenant seems pretty certain about where he should place his bets.

The funny thing is that The Lieutenant tries to convince his friends, who are also detectives on the force, to bet the opposite way as him. He goes long rants about how the series needs to even out a little more and needs to be prolonged because of revenue. He talks about the endorsements that the players want to get by doing commercials, and how the dodgers are going to lose some games on purpose so that the series becomes more exciting. At one point, The Lieutenant even tells his buddies that he was at the last game and stood right next to Darryl Strawberry (who was on the dodgers at the time of this series), and looked him in the eye, and could tell what he was thinking. He could see in the man’s eyes that he struck out on purpose. This sort of thing is so ridiculous that it’s funny. After all, The Lieutenant wasn’t even really at the game.

While the series is going on, mostly in the background of the movie, there is also a case that The Lieutenant and his men are pursuing. The case involves a nun who was raped by two men. She is taken into the hospital and treated and the lieutenant sneaks in and spies on her. He does the same thing later on when she goes into a confession booth back at her church and talks to the priest. This is how The Lieutenant gets information. By spying and putting himself in places where he is not supposed to be.

The problem with this movie is that the case involving the two kids who raped the nun is not given much priority. We see scenes involving The Lieutenant and his detective buddies talking about it, and we see The Lieutenant checking up on the nun, every once in a while, but we don’t really see how he is pursuing suspects or trying to catch the boys who did it. Instead, the movie gets distracted and gives us other, unrelated scenes that show us how this character is a dirt bag of a cop.

In one of those scenes he gets in the middle of a dispute between a storeowner and two guys who the owner claims have just robbed him. There is another cop on the scene and The Lieutenant tells that cop to take the owner down to the station to fill out a report. As soon as the cop and owner leave the store to go downtown, The Lieutenant turns to the two men accused of robbery and makes them hand over the money. He then pockets the money himself and sends them on their way.

Another scene in the movie has the lieutenant pull over two under age girls who were out partying at night and is now driving home without a license. He harasses the girls and threatens to call their father, and gets them to say that they will do anything so long as he doesn’t do that. That’s when he makes one girl show him her ass and the other one mime giving her boyfriend head while he masturbates on the side of the car. This is the most memorable scene in the movie because it is so graphic and extreme. There are other moments that are well-known because of their levels of pushing the boundaries, such as a moment where The Lieutenant stands in place, naked, with outstretched arms, crying, but that is just an image. The scene with the girls is more of a story example that shows off how badly this guy abuses his authority.

While the nun case is never really pursued with regards to chasing after leads, or doing serious police work, it is the main case of the movie. And it leads to some interesting conversations. The Lieutenant gets into it with the other detectives working the case one day, offending their religions by saying he doesn’t care that it was a nun who got raped, and getting them all worked up. And when he overhears the nun talking to her priest, The Lieutenant learns that she knows whom the boys are, but doesn’t want to turn them in. she still considers them good boys, and she forgives them.

The Lieutenant cannot believe this. He confronts the nun towards the end of the movie and practically demands that she does not forgive them and seeks vengeance instead. But he cannot break her down, and this only baffles and frustrates him even more. The movie has a lot going on, such as the case, The Lieutenant’s extra-curricular exploits, and the World Series, which is constantly in the background. But none of these elements is giving the full treatment it deserves. Instead, we get kind of a mish-mosh of this guy’s life. We get to see how much of a mess he is, and it makes sense why the case is never really pursued to the full extent of good police work. The Lieutenant isn’t interested. He keeps following and checking up on the nun because he’s got no other ideas, and because this is the easiest and laziest way to go about it. The movie gets creative with its use of the World Series, but otherwise it is very much like any other cop movie. This cop just happens to also be a junkie. For The Lieutenant, who was the main character of Mean Streets, and the rational one to Robert Deniro’s reckless character, Johnnie, this is playing the exact opposite role of what he did in that movie. Bad Lieutenant is like showing us what mean streets would have looked like if it were The Lieutenant playing the Deniro role. It’s not a good movie, but it does have some redeeming qualities.