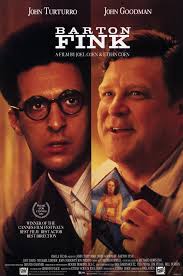 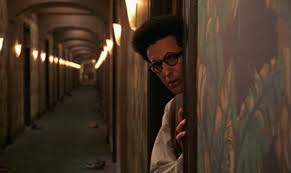 A very strange and artistic movie that keeps you on the edge of your seat knowing something creepy is coming, as it tells the story of a man trying to bang out a story in a deserted hotel.

Barton Fink is a pretty crazy movie. Which a film by the coen brothers, which tells you right away that it will be both artistic and smart. It’s also very much a Coen Brothers film, which means it’s got black humor and strong elements of film noir. the movie is about a writer who can’t write. Barton (John Turturro) is a New York playwright who is hired by Hollywood to go out to California and write a screenplay for them. and so he packs his bags and goes.

Barton arrives at the Hotel Earle where the bellhop named Chet (Steve Buscemi in a brief, but memorable role), comes up from the basement to stop the bell and send Barton on his way. Then there’s an elevator man who looks like he’s half-dead as he sits on a stool, presses the buttons, and announces the floor. These are the details of the Coen brothers, making this hotel a very strange and creepy place.

During the days, Barton goes out and takes meetings with the people who run the studio. there’s the studio head, an excited man with way too much energy who talks a mile a minute to the frozen, coffee cup holding, Barton. this guy is extremely funny and his interactions with the much more quiet and subdued Barton is all about rhythm. the two actors play off each other nicely.

And then Barton is back at his hotel, with the wallpaper peeling off because it is just so hot, meeting john Goodman’s character, Charlie. This is the annoying neighbor who every hotel guest wishes he never had to meet. at least that’s how it seems, when a sweating Charlie busts into Barton’s room, uninvited, and sits down for a drink. But then the two men start talking and Barton realizes that, annoying as this man is, he is the common man, who Barton has spent his career trying to write about. whenever Barton preaches about his writing and what he’s trying to do, he preaches about the common man. he’s out of place with the upper class, as can be seen in an earlier restaurant scene, towards the start of the movie where an uncomfortable Barton sits at a table with a couple that can’t stop complimenting him.

But with Charlie, Barton feels right at home. Maybe it’s because this is someone he doesn’t have to put on act around. He can just be himself. The two men hang around each other in undershirts, and at one point, even wrestle with each other. There are certainly homosexual ideas at play here, but then there’s the other side of the coin, which is that these guys are just friends, trying to help each other out. Charlie wrestles with Barton, only to show his buddy some moves that maybe he can use in his screenplay about wrestling.

Barton continues to meet other interesting characters during the day. He meets a producer with the studio, played by tony Shaloub. This guy is just as much fun as the studio head, as another fast talker, only a little meaner and not so confident in either the studio or in Barton. Shaloub can’t seem to understand what the problem is with writing this movie. It’s a B picture about wrestling, he keeps telling Barton, just write it. Shaloub is a great Coen brother’s actor, and the way he quick talks the quiet Barton here is just like the way he quick talks the more subdued Billy Bob Thornton in the Coen’s movie, the man who wasn’t there. Both this movie and Barton Fink are very similar, and both very artistic, and if you like one, then you are likely to appreciate the other.

Another daytime character that Barton meets is W.P. Mayhew, (played by John Mahoney), who Barton considers to be the finest writer of our time. He has nothing but compliments for Mayhew, even as he sees the man puking in the toilet of a public restroom from having too much to drink. As Barton gets to know Mayhew better, throughout the movie, he realizes that all the things he once thought about great writers, might really be a lie. This man, Mayhew, is not only a drunk and an abusive man, but there’s also the possibility that he doesn’t even write his own books.

Barton realizes that mayhew’s secretary, Audrey, might just be the real writer, and so Barton brings her over to help him write. She is meant to be like a muse, but instead of writing, the two of them just end up having sex. This leads us into the final portion of the film. When Barton wakes up from his night with Audrey it is a whole new day, and quite a lot has changed. there are dead bodies, and reports about murdering neighbors and poor Barton doesn’t know what to think or do.

There are a ton of ideas that now suddenly come to life for an exciting ending. Is everything that happens from this point on a dream? The way the halls light on fire as if some kind of an inferno certainly implies that. Is this woman dead because she slept with Barton? He brought her over to help him write, and since he let temptation get in the way of what he needed to do, maybe that’s the reason she had to die. or is she dead because the man who was listening through the pipes had a sexual interest in Barton and this woman came in and ruined that for him. There are tons of theories that can be made here, and there’s no way to know which one, if any, is correct. but it’s sure fun trying to guess about it.

Barton Fink is strange. It’s not a feel good movie, and it’s certainly not a movie for everyone. this is the opposite of mainstream. It’s not ridiculously bizarre, like David Lynch’s movies (Eraserhead?), And it certainly has a compelling plot. The movie is edge of your seat interesting, especially since you know the whole time that something eerie is on its way. The humor in this movie isn’t the easiest to appreciate, but it does get funnier and funnier the more times you see it. Ultimately, it’s a pretty cool film noir, where you’re never sure exactly what’s coming. I love the use of the hotel as the main scenery here, and perfect casting really fills those empty halls with the right characters, from turturro and Goodman all the way down to the brief appearances of Chet. Barton meets crazy characters during the day, and then goes home to talk about it with the even crazier Charlie at night. Maybe Charlie is just a figment of Barton’s imagination. Maybe Charlie represents the things Barton wants to do, but can’t. one thing that is certainly funny is that throughout the movie Barton considers Charlie to be the most normal person he’s met (since he represents the common man), and in the end, he turns out to be the craziest of them all. it’s a deep movie, and very dark, but still a lot of fun.