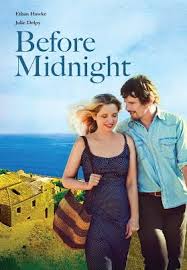 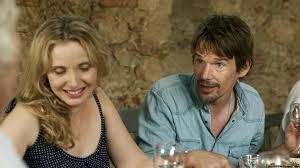 Very dialogue driven, just like the other films in this trilogy, this one is certainly better than the second film and has some interesting twists and turns.

A pretty cool movie, and the perfect way to end the trilogy, this one really jumps in time to the point where the characters are practically living another life. Jessie and Celine are together. Finally. And the movie is about their relationship as a couple. Now that’s something we have yet to see from this trilogy. The film is about the two of them on vacation in the Southern Peloponese of Greece, along with their two children. What makes the movie so interesting is the conflict that is brewing under the surface, throughout the film, about Jessie’s son, and his feelings of wanting to be in the States to be a better father, and be around more often. The buildup comes from the conversations and phonecalls that Celine has with the son, which Jessie is not a part of. Those only make him more upset. Unfortunately, the mid-portion of this film is lacking, going away from that topic in order to have some pretty irrelevant conversations (a new book Jessie is thinking about writing which has nothing to do with these movies at all.) Luckily the film gets right back on track when the two of them go away for an evening together, and we end up with the best conflict and strongest climax in the entire trilogy.

Before Midnight is the final film in the trilogy that started with Before Sunrise, some twenty years ago. The schedule has been that this team has made one of these movies every ten years, going back to the mid-nineties. And each of the films has really propelled the story along, as opposed to other trilogies and sequels that use their multitude of films to just rehash the same plot from the original movie, simply because they know the public liked that first film. The team here is director Richard Linklater and stars Ethan Hawke and Julie Delpy. The three of them cowrote the screenplay to all three of these movies together and this third movie is definitely one of the better films.

The reason for that is simple. It’s the first movie with actual conflict. Hard to believe the two films that came before it both had no real conflict, and yet they were still good. We teach writers that every story needs a problem and a solution and that watching a story or movie without any conflict is boring. Yet, somehow, they managed to make the other films interesting. In the first movie, it was pure romance, plain and simple. There wasn’t a single moment of either one of our characters, Jessie (Hawke) or Celine (Delpy) ever getting unhappy with each other. The second movie was along those same lines until a scene towards the end where the two of them get into a car (out of the public eye for just a few moments,) and Celine loses it. This is the first sign that she might be troubled. Here, in the third movie, we get to see that taken to the next level.

The movie starts out with Jessie and his son at the airport. His son is going back to the States to return to his mom for the start of the school year. He has been abroad with his father for the entire summer. The two of them are in Greece. We learn little pieces of information at a time from their conversation, such as they are on vacation in Greece and have been staying at a families home. Jessie sends his son off, after first hearing from the boy that it’s been the best summer of his life. Then Jessie walks outside to the sounds of excellent music that really makes you feel like this is all wrapping up. And we see Celine.

She is standing by a car, waiting for Jessie, with their two twin girls asleep in the back. Now this is incredibly surprising because at the end of the second movie, they were not together. Jessie was still married (unhappily) at the time and he and Celine had just spent the afternoon together. I really like the way this trilogy uses the time in between films to make major jumps in the character’s lives. What is so special about these movies is that it really is ten years in time, in between when they make the movies, and it is also a difference of ten years in time on the screen. So with the second movie, it began with the revelation that Jessie was now a best-selling author, had written a book about his night in Vienna with Celine (the first movie,) and was in Paris to promote it. Now, the third movie leads Jessie out of the airport to give us the revelation that when the second movie ended, he must have spent the night with Celine, stayed in Paris, and changed his life to be with her.

Now starts the format that we are used to with these movies. Long scenes with lots of dialogue. The first of these takes place in the car, with the two girls fast asleep in the back. Jessie and Celine talk about her job and how she is thinking about going for something new. He does not support this idea and gives her lots of reasons. Then they get into the idea of moving to the States so that Jessie can be a better father to his son and be there more for the boy. Celine does not like this idea. Mixed in with all of this there is some humor, when Jessie takes an apple from his sleeping daughter’s hand, and also when he decides to bypass the ruins of Greece that they promised the girls they would stop off and see. The humor comes when Celine says things like that the girls might turn out to be anorexic or ballemic, and should blame Jessie for the apple. Or when they skip over the ruins and she says they might end up in rehab one day due to lack of sleep since their father said, “you snooze, you lose,” about why they missed out on the ruins.

Jessie and Celine stop off at a grocery store and then arrive at the home of a famous author, named Patrick. He is an older man who has invited Celine and Jessie to come and stay with their children, at his guest house. This is their vacation in the Southern Peloponese of Greece. They have made a number of friends here, including Patrick’s grandson and his girlfriend. There is also a couple there who is more of the same age as Jessie and Celine. This is Stefanos and Ariadni. The conversation starts with Jessie talking to the men outside about a book he plans to write. When the discussion is about his previous books, it is interesting. Especially when we hear about what happened after the end of the second film, with the two of them staying in doors for days. But when it turns to Jessie’s new book, which really has nothing to do with the plot of the movies, it seems like the actors are just riffing on ideas they had. Jessie talks about a town where everyone has a problem, such as a man who can’t remember his wife, a woman who constantly thinks she is experiencing deja vu, and things like that. It’s a pretty pointless scene.

The dinner table scene that follows isn’t a whole lot better. We get more conversation that is not especially interesting. Much of it is about men versus women, starting with some talk about how when men come out of a coma their reaction is very different from women who experience the same situation. We learn about how some of the couples met, what the characters think about the future of sex, and things like that. This mid-portion of the film is definitely the slowest, and there’s a couple of reasons for that. First is that the conversation all seems pretty irrelevant. But secondly, this is the first time in the trilogy that we are watching scenes of dialogue that involve more characters than just Jessie and Celine. In the first movie, they did have a scene with a gypsy woman and another one with a poet, but those were quick moments with characters who we did not get to know at all. At Patrick’s dinner table, however, every one of the characters seems important. If only what they had to speak about was more interesting.

Stefanos and Ariadni have offered to watch the children for the night and have paid for Jessie and Celine to spend their last night at a hotel in a remote location. Jessie and Celine don’t want to go, but realize pretty quickly that they don’t have a choice. This is a gesture that the other couple has done for them, and it would be rude to not accept it. They start their adventure by walking along a path to an old Church from the Byzantine time period. Like most of the scenes in the trilogy, their walk is long and filled with conversation. It’s nice to be back with just the two of them again. But like the other scenes in the middle of this film, the walk and dialogue is not especially interesting.

Then something changes. The two of them arrive at the hotel and we get what could quite possibly be the best scene in the entire trilogy. It is the scene of conflict, also referred to as the fight scene. It begins with the two of them getting it on, being as romantic with each other as ever. But then there is a phonecall from Jessie’s son, and the phonecall is to Celine. She speaks to the boy for a few moments and then hangs up. This makes Jessie pretty upset. It is something that has been building throughout the film. In the early car scene, he learned that his son spoke to Celine, and not to him, about kissing a girl and a little fling they had during his time in Greece. Then, also while in the car, the son calls Celine, for a brief moment. And now, one last time, here towards the end of the movie, the son calls Celine again. And once again she does not put Jessie on. He is frustrated, but gets over it. Yet the conversation keeps dipping into upsetting areas, such as talk about Jessie’s ex-wife and how they really screwed up with how they handled her at the time when he and Celine were first getting together (as an official couple, at the end of the second movie.)

The fight becomes about whether or not Jessie needs to move them to The States, and whether he and Celine should break up over it. She is the one really pulling the strings here, making the big statements, with him just trying to figure things out. What makes the scene so great is that it really has different parts and levels. Twice during the sequence, Celine storms out and then comes back in. At another point things start to settle down and Jessie pours glasses of wine for them, only to have the argument pick right back up again. This scene, followed by the one after it, where Jessie uses his writing skills to come up with a great time machine scenario, are terrific. They really give the movie the conflict and climax it needed.