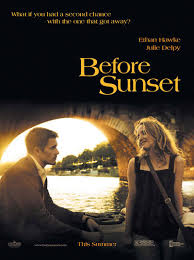 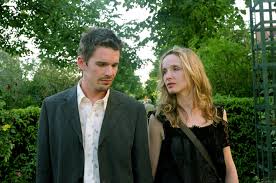 Not quite as good as the original film, this movie is interesting without being compelling.

This movie is definitely entertaining, but it does not have the same spark as the first film. What works about this movie are the converasations regarding the characters and what they experienced in that first movie, as well as what they have done in their lives since then. What does not work is the small talk about random things, such as where mankind is in society today. These two definitely have a connection, but the movie has put them into a situation where they cannot act on it, and that causes a problem. Whereas they were kissing in the first movie, by about the midpoint of the film, here they can’t even do that. They are more friends than anything else, and that’s a shame, considering how romantic and powerful the first movie was. This sequel is interesting, and it deserves credit for changing up the formula in a number of ways, but even still, there is definitely something missing.

Before Sunsent is a sequel to the movie Before Sunrise, which was made nearly a decade earlier. That time frame is important, because the movie treats the situation like real time, saying that the characters haven’t seen each other in ten years. There is a also a third movie to round out the trilogy, called Before Midnight, which was made ten years after this film. Consider that the director is Richard Linklater, the same guy who made Boyhood, about checking in with characters every two or three years for over a decade. This director clearly likes to tell these stories about characters progressing through time, and unlike most filmmakers who shoot their movie all at once and just age the actors a little bit by using makeup, Linklater likes to do it in real time. He likes to really let the actors age just like the characters are doing. Linlater is a unique filmmaker in this way.

Before Sunset is not even close to as good as the first movie. That first film was a sort of anomally. It captured lightning in a bottle. Not that it was amazing or anything, but it somehow managed to take this story about two strangers meeting each other and spending the night together, and make it pretty interesting. The dialogue in that movie worked. Here, in the sequel, the only dialogue that really works is when the characters talk about what happened in the last film. That, and occasionally when they talk about where their lives are right now. But no small talk. It’s in the movie, but this time it just doesn’t work.

Luckily a vast majority of this movie is about reflecting on the last film. For these characters, Jessie and Celine, they have not seen each other since the end of the last movie. That film ended with the two of them going their separate ways and promising to meet back at the train station, on this exact platform, in exactly six months. We never found out if they made it back for the meeting or not. In this movie we do. It starts out in a book store, with Jessie, now a publihed author, making the last stop of his tour. He goes around speaking about a new book he has written.

The book is about that one night in Vienna with Celine. The reporters ask him whether it is based on a true story and he admits that it is. They ask if the characters did indeed meet on that platform six months later, and he does not supply them with an answer. Then he gets up and walks around the book store and runs into Celine. Now, apparently he saw her earlier, while he was speaking to the reporters, and so he knew she was there when he sees her again, now. That’s a little strange. Why doesn’t the movie show us that moment of him first seeing her? This is his long lost love who he hasn’t seen in over a decade. I suppose the movie knows that other films have featured moments just like it before, and that this is a way of doing it differently. To a certain extent, it works. One thing that definitely works is opening the movie with these questions from the reporters and discussionabout the first film, so that the viewer can be reminded of that movie and get a little refresher course.

Celine and Jessie decide to leave the book store together and go to a coffee shop. Once there, the question immediately comes up. Was she there in Vienna on that six month date? Was he there? She wasn’t. It was her grandmother’s funeral that day. He was there. He flew all the way from the states just to be there and when she didn’t show, he put up flyers with his phone number on them, just in case her train got delayed and she was on her way there still. That’s a harsh reality, and the two of them figured they would never see each other again after that. While in the coffee shop, just like in the first movie, they don’t order or eat a thing. Not on screen, anyway.

The two of them leave the place trying to make small talk about how society has gotten worse. Celine is the pessimist here, which is very different in the first movie. Now it is Jessie who is the one looking at the bright side. He has had success with his book, and is now an optimist. In the first movie, it was Jessie who was down on everything, thinking everybody they came across (the gypsy palm-reader, the poem writer lying by the water), was pulling a scam. Times have definitely changed for these characters. Jessie talks about how his problems now are much bigger than they were when he was younger, but at this point in his life, he is also better equiped to handle them, so it all works out.

Jessie’s situation is that he is married wiht a child, but he is unhappy in the marriage. He tells Celine about how he and his wife were on again, off again, and how one of the times that they got back together, she became pregnant. So they got married and had the child, but they both know something isn’t right between them. Jessie tells Celine that he wants his wife to be happy, and he knows that she can’t be that way with him. It’s an interesting back story, but we only get about one scene delving into it, and we could have used a little more. Especially since the idea of divorce never really comes up.

Jessie is more interested in talking about Celine than he is about him and his wife. He tells Celine that he wrote the book for her, hoping it might somehow bring the two of them back together. He thought that maybe this book could be a beacon that would lead to finding her, and obviously he was right. She doesn’t believe him and tries to downplay that one night they spent together. At first, she claims that they didn’t even sleep together, and that she certainly doesn’t remember if they did. He can’t believe this, considering he remembers every detail about that night.

It isn’t until the two of them get into a car, away from the outside world, that Celine has a meltdown. Finally, for the first time in two movies, we get to see her unhappy about something. Celine is miserable because she can’t find a guy to settle down with. Every guy she likes ends up breaking up with her and then going off to get married with the woman he meets right afterwards. These guys call her up to thank her for teaching them everything they now know about women. Celine doesn’t want to marry any of these guys, but she would at least like the option. Jessie mentions that he falls into that category of guys who got married after being with her, just like the others. It’s a very strange scene, with her wanting to get out of the car, because the conversation has touched a nerve.

Unfortunately, the movie doesn’t have anywhere to really go after that. This has got to be the climax, because the movie does go on a bit further, but nothing nearly as exciting as this happens. By the end of the film, they are in Celine’s apartment with her playing a song. It’s a pretty low key ending, and I suppose it leaves the viewer wondering whether or not they got together for the night or not. Just like the first movie, it leaves us with a question to ponder. Only here, in this second film, the sparks were not there in the same way. These two characters never even kissed. How could they when he is married and she has a boyfriend? By putting the characters in these relationships, the filmmakers painted themselves into a corner regarding how much could happen between the characters. We want to like them and not consider them cheating on their spouses, and so nothing physical can really happen. I do prefer this than to a movie that is just a carbon copy of the original film, which most sequels tend to be, but even still, this movie was not all that exciting or entertaining. It lacked much of the charm that the first movie had, including the bringing in other characters for quick scenes. In the first movie they spoke with actors in a play, the gypsy, and the poet. Here, they speak with nobody other than a driver who speaks only French. That is one of many reasons why this movie just doesn’t have the same energy as the first film.