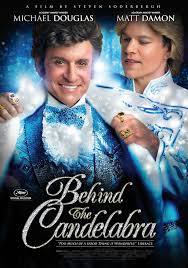 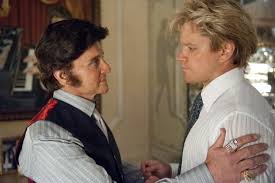 A fascinating film about the relationship between liberace and his young lover, that is interesting for a while, but then spirals into familiar territory somewhere in its second half.

A pretty good movie with tremendous talent behind it. This is basically a combination of Boogie Nights and a Liberace biopic. The movie is not just about Liberace, and it is actually not even told from his point of view, but from that of Scott Matt Damon), his live-in boyfriend and driver. That gives us the whole fish out of water experience of coming into this world with Scott, and being exposed to a new environment. Michael Doulgas plays Liberace, and he is just dynamite, getting the voice and mannerisms down perfectly. The movie is entertaining and dark in all the right ways. It does start to feel familiar at times, in the second half, as we know how the story of a rise and then a downfall tends to go, but even still, this is a well-made, quality film.

Behind the Candleabra is the Steven Soderbergh directed biopic about Liberace (played by Michael Douglas). Only it’s not really a bio pic about the man’s life as much as it’s a snapshot of one particular area of his life. This movie is solely about Liberace’s relationship with a young man, named Scott (Matt Damon). it’s about how liberace made scott into not only his boyfriend, but also his employee around the house. they clearly had the option to do a full blown bio pic here, about how liberace got famous, starting at the time he was a child, and they chose not to. That decision was a very smart one, focussing only on one single story and telling it in full detail and disclosure.

soderbergh is one of those directors who is very artistic, very smart, and has a core group of actors who he loves working with. most of them have been in the ocean’s eleven films, from george clooney, to matt damon, don cheadle, and julia roberts. these are actors who he has worked with again and again, from out of sight to traffic to erin brokovich. michael douglas might be an ocean’s eleven alum (i wonder if they wanted him for al pacino’s role in the third film), but he has certainly worked with this director a bunch as well (traffic, haywire.) he and damon are both huge stars, and it’s very interesting that even with their involvement, this movie went straight to hbo.

there have been all sorts of accusations or rumors about why that happened. it is known that soderbergh tried to get the movie picked up by a studio and that no studio would budge on it. at that time soderbergh said that hollywood wasn’t interested because the movie was too gay. but look at some of the other movies they made, like brokeback mountain and milk. behind the candleabra wasn’t going to cost any more than those other films (budgeted at 5 million.) the real reason seems to be that hollywood wasn’t interested in a movie about liberace. the result ends up being their loss, as the movie happens to be very good.

at the start of the movie, we are with scott, the main character, as he works on with animals on the sets of movies. watching what he has trained them to do, attacking stunt men, is pretty funny. scott is going to be the fish out of water character who leads us into the new world of the movie. he’s the guy who starts with nothing and is suddenly given the keys to everything. it all reminds me of boogie nights, especially in the direction the movie ends up going.

you can predict from very early on that at some point liberace will get tired of scott, or will replace him with someone younger, or at the very least, the two of them will start arguing and fighting and things won’t be so grand anymore. even if you can’t predict it, the movie has liberace’s butler come over to scott, while he is at the side of the pool one day, just to tell him this. he explains to scott that liberace has gone through at least three other boys, just like he is doing now with scott, and all of them have come and gone. only he, the butler, is there to stay.

i like how the movie takes its time bringing scott into the world of liberace. and also giving us little mysteries to try to figure out along the way. for example, when we see scott at the dinner table with two older figures early on, we assume these people are his parents. then the phonecall rings and the woman gets it and tells scott that it is his mother. and he refuses to take it. we learn more details about this later on, and about the relationship scott has with his mother, and why he would refuse her phonecall.

there is a character named bob, who is sort of the bridge or the go between, connecting scott with liberace. this guy is scott’s friend and he brings the boy to one of liberace’s shows. only he is also close with liberace and brings scott backstage to meet the man right afterwards. liberace invites the boys to come use the pool at his house the next day, and they both eagerly agree. once there, scott sees that one of liberace’s dogs is having a problem, and since he works with animals, he knows what to do about this. he orders the right medicine for the dog and then comes over to hand deliver it. this is when the relationship between scott and liberace begins. it would have been nice to know a little more about the bob character and who he is, and how he has connections with liberace, before the relationship got started, but i suppose it wasn’t crucial information to the plot of the film.

the movie gets very dark at times, having scott turn to drugs and going at it hard. the film also shows liberace and scott having sex, and i like the way it doesn’t shy away from the details, telling us exactly who is doing what to whom. most movies about gay couples don’t even go that far. the drug use and darkness and downfall in the second half all remind me of boogie nights, and the way that a young star is replaced over time by someone who is even younger.

there are a lot of great things going on in this movie, including a very talented cast, (Bakula and dan akroyd are like lost gems, who still have the same talent that made them both famous). i like that the movie shows liberace in concert and how we are able to see exactly how talented he is and why he would be so famous. and then there’s the way that liberace wants scott to have plastic surgery in order to make himself look just like liberace, and how scott actually goes through with it.

somehow this movie is able to either use makeup or digital effects to really look like scott had the procedure. that means for nearly half the movie, matt damon is walking around with a face that looks a lot like michael douglas. pretty cool stuff. the movie does feel familiar in its second half, as everything comes crashing down in scott’s world, but the first half takes us into a world that we haven’t quite seen before. we watch as scott is treated by royalty and given all sorts of positions working for liberace, changing his wardrobe and his face, all to have it come crashing down later in the film. i also like the way this movie wrapped things up with the two characters, giving them some interesting final moments together. it’s definitely a cool movie with a lot of talent behind it.