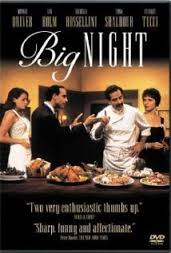 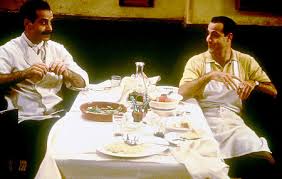 A funny, unique comedy about two brothers who own a failing restaurant and try to find a solution to their money problems.

Big Night is a movie that takes on the subject of a restaurant and the two brothers who run it and finds all the right tones of humor in the way these two guys interact with the world. The brothers are played by Stanley Tucci as Secondo and Tony Shaloub as Primo. Secondo is the waiter and Primo is the cook. In addition, together they run this restaurant the way they want, which is quite different from the way the restaurant owner across the street, played by Ian Holm, conducts his establishment.

The boys keep their place traditional, which means traditional art, music, and most importantly food. Holm’s place, on the contrary, is more mainstream and jazz club-like. When Primo describes to one of his friends the kind of things that go on at Holm’s restaurant, he starts shouting out, “Rape! The Rape of cuisine!” This kind of dialogue is very funny, because either it is a misunderstanding of what the word rape means exactly, or because it is intentionally so vulgar an image that it is really, exactly what the guy intended to say. Either way, it is hilarious.

Primo is the guy who is all about tradition. He is also the brother with the big temper. When a couple comes to the restaurant early on and tries to order two different dishes with starch, Primo nearly freaks out. He cannot believe this woman does not appreciate the first of his dishes that she is having and has to have another one just to get some starch. His brother, second, is the voice of reason, telling him to calm down. When Primo asks his brother why the hell this woman is ordering the second dish, Secondo tells him, “I don’t know, she like starch.” again, it’s the word choice that makes the scene so funny. There aren’t many movies about traditional restaurants to begin with, but how many of them go into the back room with the chef and talk about starch?

The movie includes both romance and conflict. The conflict leads the essential plot of the film because the boys are behind on their payments and don’t have enough money or enough business to keep the place opened. Secondo goes to a bank advisor and is told the harsh truth about how he needs to come up with the money fast or else they will foreclose on his restaurant.

Not knowing what to do, Secondo goes over to Holm’s place across the street and asks for a loan. Holm is doing very well for himself and wants more than anything for the two brothers to come and work for him. Of course, the brothers have two much pride for that and enjoy having their own place. Holm tells Secondo that he cannot give him the money, but he can do something else for him instead. He’s a close friend of the jazz musician Louis Primo and in the next few days, Primo will be in town. Holm tells Secondo that he will arrange for Louis Primo to have a meal at Secondo’s restaurant. If Secondo gets the press and throws a party that is worthy of media attention, it will probably do wonders for his business.

Therefore, Secondo goes about getting ready for the Big Night. He tells his brother all about it, only leaving out the part about how it is Holm who is doing them the favor (Primo hates Holm). The two boys begin to prepare. Each of them has a woman in their lives and they both go to see the woman and get her involved.

For Secondo, that woman is Minnie Driver, a girl who wants her man to settle down and get serious with her. She doesn’t know about Secondo’s financial troubles, but he seems uncertain about money and even tells her that that’s the reason he can’t think about marrying her at this time. They have a very funny conversation in the back of a car, where he gets frustrated about her wanting things from him that he can’t give.

Primo, meanwhile, has somewhat of the opposite situation. He doesn’t even have the girl, but he wants her and knows he likes her. In his case, the girl is the owner of a flower shop, played by Allison Janney. Primo goes to see her and orders flowers all the time, but he never has the guts to ask her out. In one funny moment, opens the flower door and walks in pretending to look for flowers for his restaurant. When he comes out, he has a single flower in his hand that he gives to Janney as a romantic gesture, but it is very misinterpreted and really just seems like he’s picking that one out as one that he likes for his restaurant. It’s a small moment, and subtle, but especially funny when you consider that they are her flowers and he’s trying to give her one of them.

The party is the big highlight of the film and there’s a lot of setup in getting ready for it. All of the characters that our two brothers have come across since the start of the film (with exception to the bank man) show up to the party and there’s a stellar cast involved here. There’s not only Holm and Driver and Janney, but also Isabella Rosselini and Campbell Scott. There is music and dancing and outstanding food. The characters drink and play games and it is truly a night to remember.

The movie takes a strange tone after the party as things empty out onto the beach, but one thing for sure is it’s not predictable. It’s a special kind of movie, really unlike anything I’ve ever seen in the way it embraces Italian culture but finds humor in the way they misinterpret and clash with American culture. One of my favorite moments in the film has Secondo tell a joke about it raining inside to Primo and Holm. Neither one of them gets the joke at all and they both have such a problem with not getting it and how ridiculous it sounds that it needs to be explained again and again to them, and each time just makes them more angry. This is the kind of thing that is not so much about plot, but about humor and character. In addition, those are the driving forces of the movie. There’s a very simple plot at work here and that happens to be a good thing because it allows us to really enjoy spending time just with the characters. There are whole moments of quiet here as they either cook or eat, and all of it is handled so delicately and with such detailed precision that the movie really is a work of art.