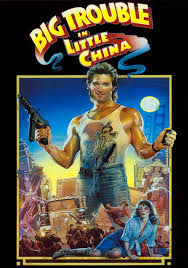 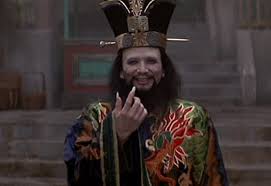 A fun eighties action movie about mysterious ninjas, spirits, and legends in Chinatown.

A fun B movie where the action isn’t anything special, but the ideas and creatures are certainly cool. this film is about an underground chinese cult-like society where a leader named lo pan has powerful creatures working for him in a masterplan to kidnap and marry a green eyed woman. That brings in jack the truck driver and his friend, Wang Chi, to rescue the girl and navigate around lo pan’s hideout. The movie is certainly campy, but it’s also a lot of fun. Every time you turn around there’s another cool creature or guy with a new special power that keeps us entertained.

Big Trouble In Little China is a great John Carpenter B movie, which is to say that it’s not really a great movie at all, but more just a fun, guilty pleasure film. Carpenter was one of those eighties directors who really found his niche with these kinds of movies, and Kurt Russell was his best star. The two of them together made this movie, escape from New York, and the thing, all very enjoyable films that have stood the test of time. Big trouble in little china is no doubt the craziest and most other-worldly of all of them (and that’s saying a lot considering the premise of the thing in which a creature infiltrates an Alaskan lab and mutates into different people and animals.)

In Big Trouble In Little China, we meet Jack the trucker, (Russell), as he is driving his truck around, giving advice on his radio to other drivers. He talks through the handset, over the intercom, as if he has a radio talk show or something, that everyone is listening to. This is just to show off his arrogance, of course, quoting himself with lines like, “like Jack always says…” Jack stops off to play cards with his friend Wang chi, and when Wang Chi loses their game, he does not have the money to pay Jack. Only Jack is not accepting that so easily. He tells Wang chi that he will go with him to get the money, and the two of them head out together.

Wang chi ends up taking Jack to the airport first, because he is late to pick up his girlfriend, who is flying in from china. When they get to the airport, and this girl gets off her plane and arrives at the gate, all hell breaks loose. Three Chinese gangsters pull out guns and start firing. They kidnap the girl and run away with her. The girl has mysterious green eyes and Jack notices another woman at the airport, (a lawyer, played by Sex And The City’s Kim Catrall.)

Jack and Wang chi chase after the kidnappers, first in the parking garage under the airport, and then into Chinatown. They find themselves in an alley where two different gangs are going to war right in front of Jack’s truck. The men of these gangs wear red and yellow headbands and run at each other, forcing Jack to be stuck in the middle of it. That is when three men wearing ancient farmer’s hats and shooting electricity from their hands, show up. Jack thinks he has seen it all, and he floors it, but just as he is doing that, a man named lo pan appears in front of his truck. Jack ends up running over lo pan.

This movie is loaded with big event scenes that lead to other big event scenes. First were the airport kidnapping, but this alley fight scene takes things to the next level. Jack and Wang Chi do not know what to do and they retreat to a building where they can talk things over. The lawyer finds them there and joins their cause. Together the three of them (along with the help of an older man), are able to figure out that the man Jack ran over might have been the businessman, David Lo Pan. They decide to go see this man at his place of work.

When they get to lo pan is office, they see that he is actually a very old man. Our heroes do not believe so easily that lo, pan had nothing to do with the kidnapping, and so they decide to snoop around a little. They end up in some dark tunnels with the lawyer being separated from the group and captured by the bad guys. They put her into an underground layer with a freakish looking monster, as Jack and Wang chi escape the building.

They have now lost two different women, Wang chi’s girlfriend, and the lawyer, who Jack has been starting to develop feelings for. Jack and Wang Chi decide they have no choice but to go back in, only this time they take a bunch of friends with them. They enter lo pan’s home and head to the secret passageways right away. The further they get down these tunnels, the more creatures confront them.

First, a monster resembles a giant snake and pops out from a hole in a tunnel. This creature comes out of his hole, snatches up one of the men, eats him, and then returns to where he came from. Our heroes continue on, never looking back. That is when they come to a giant ball in the sky that is covered with eyeballs. This thing has a face on it, but it has so many eyeballs that even when it opens its mouth, we see another one inside its mouth. It turns out this creature is the eyes of lo pan and is spying on the guys for it’s leader. Lo, pan can see everything that the giant ball sees. The guys quickly attack the ball, causing it to fly away.

They head further down the tunnel and come to the room where lo pan will be getting married. The two green-eyes women stand at either side of his throne, both completely hypnotized. That is when the fights begin. The action itself is not anything special, but what makes the fights cool is that each one of lo pan’s three henchmen has a different ability. The first one can only fly. The second henchman is the one who really does the electricity shooting. Then the third henchman puffs up lie a blowfish.

Big Trouble in Little China is a lot of fun. The story isn’t anything special, but the creatures that were created for this movie were very cool, and it seems like they were really hoping for a sequel, having established the world here for future movies to play in. the film ended with a creature from the other world making it into Jack’s world, and unfortunately the movie didn’t make enough money to warrant a sequel. Still, this first film was good on its own. It is not anything great, but big trouble in little china is certainly an old deal of fun.