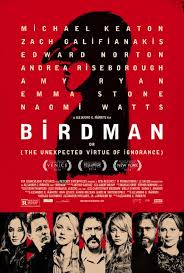 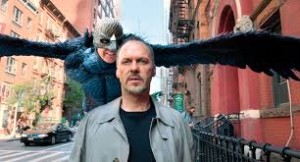 One of the most experimental and out-there movies in ages, this one is all filmed in one ongoing tracking shot and the results make it feel like you’re on of a crazy ride.

This is a pretty cool movie. It’s a film about an older actor who used to be in superhero movies and is now trying to star in a broadway play. The movie is focussed much more on the play than anything else, and that ends up meshing perfectly with the filming style and setting. Birdman is shot in what appears to be one long tracking shot, without cuts. The camera constantly follows actors around and into other scenes. That works for all kinds of reasons here, such as that nearly the whole film is set in the theater where the play is being performed. So we really get to learn the ins and outs of this setting. On top of all of this fantastic and creative style, the storyline is pretty rich as well. It gives us a new character coming in and upsetting the apple cart, as our regular guy protagonist can’t believe what’s happening all around him. This turns out to be a very entertaining and funny movie.

Birdman is a fascinating movie. It’s the story of an older actor who was once this big time movie star, headlining his own superhero franchise. That franchise was Birdman, and the funny thing is that this movie got the star of Batman, Michael Keaton, to play the role. The movie was basically written for him, and in many ways it parallels his life and how people always want to ask him about that iconic role and not let him leave it behind.

But Birdman isn’t really about that old superhero. We never even see a clip from those movies or hear anything related to what their plots might have been about. The closest we get is at the end of the movie, with Riggan (Keaton) walking down the street and imagining Birdman behind him, following him around. Suddenly the street turns into a Birdman film complete with giant explosions and missiles launching through the sky. No story, of course, just some really cool effects to show the actor’s state of mind.

Other than those brief moments at the end, however, this movie isn’t about that franchise. It’s about the actor. He does have the persona of Birdman talking to him as an inner-voice and that’s pretty cool. It’s a deep, dark, angry voice that calls things like they really are and basically motivates Riggan to be a total badass. When we meet Reegan for the first time at the start of the movie, he’s levitating in the air, sitting Indian style, wearing only his underwear, with his back to the camera. As the camera moves cloer to him we start hearing this Birdman voice talking to him about his life. We can tell right then and there, in these opening moments, that this is not going to be your ordinary film. The movie is mostly about a play that Riggan is starring in. The play is about to go into previews and there’s one major problem. The show just lost it’s co-star. There are three main characters in the play. The man that Riggan is playing, his wife, and the man that his wife has an affair with. That’s the guy they lost, and almost instantly they get a big name actor to come on board and show up at the theater, ready to perform.

This actor is Mike, played by Edward Norton. The reason why they are able to get him on such short notice is because Mike is dating the costar who plays Riggan’s wife. That actress is Leslie (played by Naomi Watts.) When Mike arrives on the set, he instantly knows all of the lines. Riggan calls him on it, not able to figure out how this guy could really have them memorized already. Riggan wants to read with the script in his hand, and Mike wants to go off script, just riffing, because he knows the material so well. This is incredibly frustrating for Riggan, being the star of the show and having this new guy suddenly arrive and start showing off his skills.

Throughout all of this setup and introductory material to the characters and their first conflict, we have some incredible character work. The camera is constantly moving, tracking behind characters or moving around them at all times. When there’s a conversation, the camera will sometimes stay still, but when a character walks away, the camera always follows. It’s like the Copacabana scene from Goodfellas or the opening night club scene from Boogie Nights (or the opening street scene from Touch of Evil, if you want to go way back), being extended for the duration of an entire movie. The only movie that ever tried something like this before was Hitchcock’s film, Rope, and the technology wasn’t really there to be able to pull it off. With Birdman, it is. The camera movement is out of this world. Supposedly there are about three real cuts in this movie, but wherever they appear, they are certainly disguised and pretty much unoticeabale.

The tracking shot way this film is made really contributes to the movie. We actually feel like we are on a ride with these characters, understanding the layout of the stage and which doors and staircases lead where. This method would not work for every movie, but it works for this film because nearly the entire movie is set at the theatre. So with one main setting, we are given the ability to follow characters and constantly move around the space, as if we were a character there, ourselves. It’s pretty amazing.

The story itself is loaded up with fun scenes and conflict, especially since these two lead actors of the show have what starts as a working relationship and quickly grows into pure hatred of each other. Mike seems to constantly be destroying things, doing scenes his own way, and not afraid to embarass the cast if he doesn’t like something. When Riggan switches out Mike’s alcohalic drinks that he’s consuming on set, for something else, Mike freaks out. When Mike gets more in a bedroom scene than he was expecting, he tries to force himself on the actress in an effort to make things look real for the audience.

Aside from Mike, Riggan also has to deal with his best friend / lawyer who is producing the play, Jake (played by Zack Galifanakus), and his daughter who is working as his assistant, played by Emma Stone. All of these characters give him great people to have conversations with and to bounce off of as the camera constantly follows him around from one of them to another. With all of this walking and movement, there a drums and symbols that play in the background, and this contributes greatly to the energy and excitement of the film.

There are a number of scenes where Riggan even steps outside the theater for a moment, right into the heart of Times Square with all of it’s noise and pandomonium. In one of the funniest scenes of the movie, Riggan finds himself locked out of the theater and having to speed walk through Times Square in his underwear. This movie is very self-aware. It talks about other actors (Michael Fasbender, Jeremy Renner), and makes lots of references to Facebook, Twitter, and TMZ. This is the movie about an older man in the entertainment industry who can’t believe what it has become. The cahracters even discuss superhero movies and how much they have taken off in the past decade. Riggan feels like he was ahead of his time and basically sold all his stock right before the market struck gold. The movie does feel slow at times, but that’s only to give us the opportunities to stop moving and actually get to know the characters a little. It’s a fascinating film with some absolutely amazing camerawork.