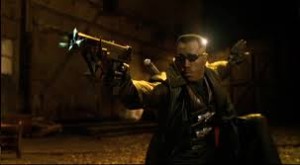 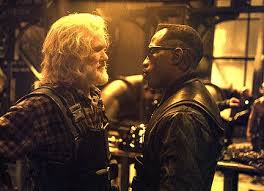 The best film of the trilogy, this one’s got style and ideas, but it’s still just okay when it comes to the action.

There’s a lot to like about this sequel to the first Blade movie, from the storyline about Wesley Snipes teaming up with the vampires, to the fact that they finally found a way to get the vampire death scenes right. Unfortunately, each of these things starts out with promise and then slowly (or sometimes quickly) fizzles away. They master the vampire deaths, and then for some reason they stop doing it in this super cool way that they came up with. There is a great team-up idea and then they never actually show us Blade fighting side-by-side or really helping the enemies out. The movie does have some cool new creatures, known as the Reapers. It also makes a smart decision in making the vampires still be villains, who just temporarily suspend their grievance with Blade in order to hunt the Reapers. This might be the best film of the trilogy, but it’s still not great.

Blade 2 is the best movie in the blade trilogy, but that’s not really saying much. The first blade was silly with its cartoon-like special effects when the vampires were killed. The way we saw their skeletons just looked ridiculously fake and dopey. While that movie established the world pretty nicely, there was no getting around the terrible effects. The third movie was the one with the weakest plot and no new ideas. But it was Blade 2 that delivered in more ways than the other two combined.

First off, this sequel has the best and most interesting plot. The vampires come seeking blades help. There’s a new creature that has been targeting the vampires and they want blade to help them catch it and kill it. These creatures are called reapers. They are like the vampires, only there is a cleft in their chins which opens up into a giant alien-like jaw. This is where their massive fangs pop out. Blade joins the vampires to go after these guys.

It’s kind of cool seeing a movie where both the good guys and the bad guys team up. It reminds me of X-2, the best of the X-men films, where both teams need to combine forces in order to combat William Striker before he wipes out all the mutants. Here, in Blade 2, the idea is in place, but the execution of it isn’t so hot. Maybe that’s because we never really feel like blade and these vampires are working together. They are constantly threatening or insulting each other, and blade even puts a bomb on the head of the guy who seems to be the leader of the vampire team, reminding this guy that at any moment, blade can blow him up.

Still, the movie does have a lot going for it. This is a film by the great Guilermo Del Toro, the master of creature effects. This guy is the best thing for creature-features since stan winston. his mimic was creatively gross. his pan’s labyrinth was creatively and hauntingly fairy tail-like. blade 2 is somewhere in between. del toro definitely gets the reapers right, but the storyline and action both leave plenty to be desired.

with regards to the action, it starts out terrific. this movie has mastered a way of having the vampires die that is both cool and exciting. they basically spark up and explode in shreds of fire. there is nothing over the top about it, like no actual flames or explosion, but instead just an internal kind of falling apart in a heap of sparks. this effect only adds to the excitement. there’s only one problem. after the first few action scenes, the movie stops using it. it’s almost as if they forgot about it, and the effect pretty much goes out the window.

the real reason why they stop using the effect is because blade stops fighting vampires and instead starts going after the reapers, who die differently. they should have had them die the same way. after all, these reapers are very similar to vampires and were spawned from vampires with just a few genetic differences. but even if the movie is going to have the reapers die a different way, it is inexcusable that when blade does take on vampires again, in the second half of the film, they no longer spark up when they are dying. the reason why is because they are all wearing armor now, but it doesn’t matter. the effect was amazing and the movie just stopped using it, even though it added tremendously to every single action scene it was featured in.

as far as the plot goes, the team-up idea is cool, but it is accepted too easily by all parties involved. blade agrees to it for no good reason at all. he tells whistler, when the old man (kris kristofferson), questions the idea, “they’ll take us further in than we’ve ever been before.” this might be true, but even still, knowing that the vampires are ready to turn on him the first chance they get, the whole thing doesn’t really make any sense. especially with the limited amount of convincing the vampires have to do on blade. they simply tell him that when the reapers are done with the vampires they will probably go after blade’s precious humans, and that’s it.

there is no training with blade and the team of vampires, known as the blood pack. there’s no getting to know you or team bonding. instead, everything seems very rushed. not only does blade never really work with them or alongside them, but whistler doesn’t either. if we’re not going to see the two forces side by side, really working together, than what’s the point of having them team up?

now i do like the way the vampires turn on blade, and so we get two different sets of enemies for two portions of the film. the reapers in the first half and the vampires in the second. i also like the way the movie starts with blade recounting what happened to whistler in the first movie and then now shows blade going off to get whistler back. this part really connected the two films together nicely in the cool way that some sequels begin right where the first movie left off (x-2 with wolverine reaching alkaline lake, and quantum of solace beginning with a contination of casino royale, for example.) in blade 2, really everything about the first few scenes is great. from the blood bank vampire opening scene to the action scene of blade jumping out a window and then slicing the tire out as a motorcylce goes by, and throwing his double edged knives through the air like boomerangs. this was all a lot of fun, and was looking pretty terrific. but then it stopped.

there is definitely something missing from this movie, and it really comes out in the second half. the creatures are cool and so are the turns the storyline takes, but the action is weak. especially when they had the perfect idea for how to kill the vampires, and just for some reason decided to stop using it (my guess is money, and that the effect was too expensive to keep using again and again.) this is the best of the blade movies because of it’s cool visuals (which have del toro’s fingerprints all over them), the basic team-up story-line, and the way that we get two sets of enemies, one for each half of the film. stylisticly, there’s a lot to like here, and i’m glad they finally figured out a way to make the vampire deaths look great. if only they used that idea more often throughout the film.