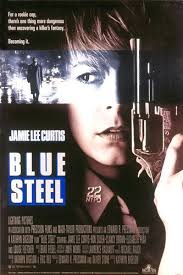 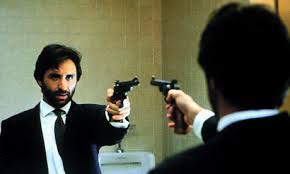 An entertaining police thriller that is intriguing for a while, but then gets a little too repetitive in it’s final act.

Kathryn Bigelow is a great director, but she wasn’t always that way. Her movie, The Hurt Locker, is the best film of her career and will probably always be that way. It did, after all, win the best picture of the year Academy Award in 2009. And it rightfully deserved that title for it’s sheer brilliance and edge of your seat entertainment. Bigelow has made a lot of movies over the years and it seems like they were all leading up to where she is now.

Her earliest notable movie, Near Dark, was a somewhat cool take on vampires. It showed that she had some creativity in her. Then she made Point Break, which was also a fun movie. That film was a little more like the usual cop movie; only it had the interesting idea to combine being an undercover detective with the California beach surfing society. It also gave Keanu reeves one of his best roles of all time (The Matrix might be his best movie, but Point Break and Speed are his best roles).

Bigelow then went on to make strange days, which had a cool premise, but was just a little too dark for it’s own good. All of her futuristic ideas in that movie were very creative and interesting, but when we started getting rape scenes from the point of view of the rapper, it was a little too graphic. Well, in between near dark and point break, Bigelow made another movie, called blue steel, and unfortunately it turned out to be the worst of all these notable films that she’s made.

Blue Steel is closest to strange days out of the things on that list of Bigelow’s achievements and near achievements. That’s because both movies are extremely dark and graphic. And both don’t seem to mind that or have any purpose for being that way. In strange days, at least we got all of the cool future concepts where memories could be recorded and then relived through something called playback. In blue steel, we just get a regular cop movie.

The title refers to a metal gun, and it’s really kind of a meaningless title. Yes, this is a cop movie, and yes, there are guns here, but naming a movie after a type of gun, or anything like that just shows that you had nothing better to give your movie for it’s title. That’s because this really is a pretty generic film. The premise does start off decent and even somewhat interesting, but boy does it go downhill as the movie goes on.

At the start of the movie, Megan Turner (Jamie lee Curtis) is graduating from the academy and just becoming a cop. her father is totally unsupportive and questions her. So do her fellow officers, including her partner. Why did she want to do this? She tells her partner it’s because she wanted to shoot people, and while he takes it as that she’s kidding, it’s not really clear if she actually was.

After she has barely been working at all, she witnesses a grocery store robbery from across the street. She makes her way into the store through a back alley door and holds a gun on the robber (Tom Sizemore, great in his one and only scene). Turner ends up shooting the robber after he raises his gun at her, and all of this would be fine except that the robber’s gun is never recovered.

That’s because one of the hostages at the store who is now lying on the floor ends up stealing the gun. The man is Eugene Hunt (Ron Silver), and he’s got an unusual fascination with turner. He’s also an absolute psychopath, and having witnessed turner kill the robber, his animal instincts are suddenly awoken. He goes out into the street, shoots people, and writes turner’s name on the bullet casing that is found by the police.

Meanwhile, in her social life, turner starts dating hunt, having no idea, of course, which he really is. They meet in a rainstorm and bond over a cab ride and soon they are dating each other and going strong. But one night hunt shows her his true colors when he asks turner to pull out her gun and aim it at him. She is confused and goes along with this at first, but it gets worse and soon he is confessing to her who he really is and how he was there at the grocery store with her.

This all happens at the halfway point, and it’s been a pretty interesting first half. A lot of movies would have saved the revelation of which hunt really is, for their ending. I was impressed that this movie brought that information to Turner’s attention so soon. Unfortunately though, the movie had nowhere else to go after that nugget of info was revealed. From that point on, the movie becomes about turner trying to nail hunt and hunt getting his lawyer (the great Richard Jenkins) to press charges against her or threaten pressing them. Things go back and forth a lot in the second half of this movie, and we get about three scenes that feel like they are going to be climactic ending. But none of them turns out that way. The movie was all first half stuff and left nothing for it’s second half. While the initial premise was intriguing, blue steel ran out of fuel and had nothing new to offer as it continued on. Some of the movie was certainly good, but overall it really fell apart and ended up being the same old thing we’ve seen before.